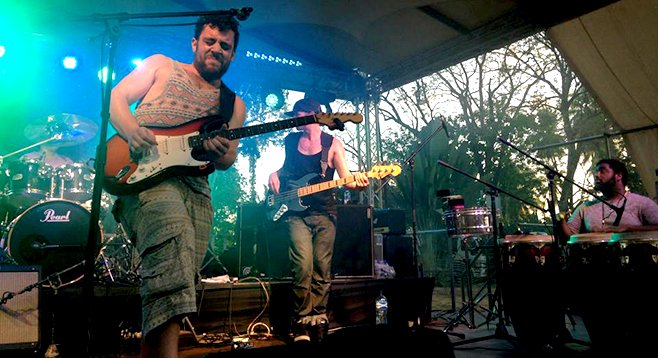 Soul to the Nth Power

The Nth Power is a Louisiana soul band that debuted at the 2012 Jazzfest, held annually in New Orleans at the Fair Grounds Race Course. They are Weedie Braimah, Nate Edgar, Nikki Glaspie, Nigel Hill, and Nick Cassarino. Things jelled after Jazzfest and they became a working band ­— good, considering that each of the members had quit lucrative national touring acts (such as Kreative Pandemonium, John Brown’s Body, the Warren Haynes Band, Big Daddy Kane, Beyoncé, and Dumpstaphunk) to form Nth Power. By 2013 the five-piece produced their first EP, Basic Minimum Test Skills, which they self-released. The Nth Power is presently on their “Fall in Love” tour, with their first full-length, Abundance, scheduled for release some time next spring.

Soul music is about a voice. In this case, Nth Power has two prime singers, including a full range of backup harmonizing from the remaining three. The lead vocalists are Beyoncé-schooled drummer Glaspie and guitarist Cassarino. His Al Green/Chris Whatley smoke-cured vocals had me hooked on Nth Power from the downbeat.

Soul is distinctly American, comes from a 1950s-era combination of the Black gospel tradition, R&B, and jazz. Just as gospel hinges on a call-and-response between minister and parishioners, so does a soul band use a similar form of call-and-response, albeit with a touch more subtlety. Funk, soul’s cousin, was carved from soul, funk being more about dance and fueled by a strong bass-and-drum downbeat with horns. Think: James Brown or Sly Stone.

Otherwise, both soul and funk are among the latest of the music genre comeback stories. I can think of at least four such units operating in San Diego right now, with more likely on the way. I’m digging that pop culture recycles itself endlessly, because sounds that were so very important to all of us at one time make little comebacks here and there as new generations of musicians rediscover them. So, what’s next?