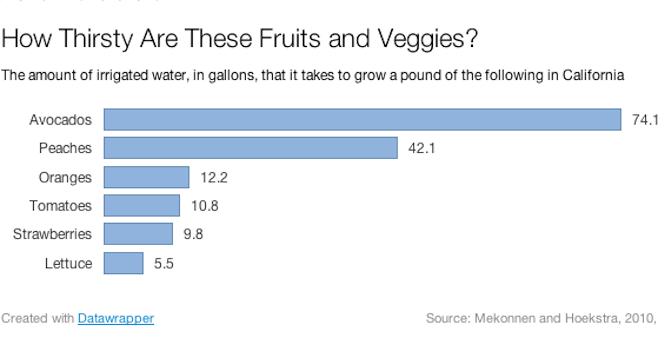 As if San Diego doesn't have enough drought-related problems, here is another: avocados. According to the magazine Mother Jones, avocados, which don't require nearly as much water as almonds, still need a lot.

According to Mother Jones and Datawrapper, it takes 74.1 gallons of irrigated water to produce a pound of avocados. The magazine reported in February that it takes 1.1 gallons of water to grow one almond. Other big drinkers: peaches, 42.1 gallons; oranges, 12.2; and lettuce, 5.5.

At Windansea they will drop in on you

As if San Diego doesn't have enough drought-related problems, here is another: avocados. According to the magazine Mother Jones, avocados, which don't require nearly as much water as almonds, still need a lot.

According to Mother Jones and Datawrapper, it takes 74.1 gallons of irrigated water to produce a pound of avocados. The magazine reported in February that it takes 1.1 gallons of water to grow one almond. Other big drinkers: peaches, 42.1 gallons; oranges, 12.2; and lettuce, 5.5.

Go to Cuyamaca or Palomar to get relief
Next Article

Paella Toñico: past and present

Mother and daughter, Yolanda and Yolinda, are keeping the show going.

My family property had a great producing Haas in the back (stupid Abbi's first of 3 husbands cut up, he said trim, but after, died) and two peach (my mom planted) in front side, gone now. I watered but did not know how to fertilize. They dried out fast now that you say it.

shirleyberan: There are problems with growing avocados. One is attracting rats who feast on the fruit that falls on the ground. Another is water. Best, Don Bauder

Many years ago, my mom's house was surrounded by avocado trees. It was built in the middle of an orchard and was surrounded by working orchards. My parents would call a local avocado company, they'd drop off bins, and we spent weekends filling the bins.

When water simply became too expensive, we had to stop watering the trees. The orchard behind us shut down, all the trees were cut down, and there are rows of houses there now. Across the valley and in many nearby areas, huge swaths of trees are being cut.

It's kind of sad. I do miss the old days. On the one hand, people should be more important than avocados that can be imported from somewhere else. But I'm just not a fan of seeing how many people we can pack into SoCal. Honestly, I'd like to see the price of water and housing and electricity drive half of them back to Nebraska or Oklahoma.

jnojr: That is the story of metro California -- agriculture being replaced by residences. I hardly think this is all good. The population growth brings many problems. Best, Don Bauder

My father had an avocado farm in Yorba Linda. I used to pick or pick-up the fallen avocados and sell them for 10 cents each. I recall when the fields were watered they were literally flooded. The dirt roads between the groves were raised and the flooding had a two-fold purpose, water the trees and drown the rats. I was permitted to use my BB gun to kill rats as they climbed out of the flooded areas. The contrast of water use (or waste) when I was young to the cost and conservation of today is stunning. I remember "watering trees" by running water for hours at the base of regular yard trees. Water Wiggles and Slip-N-Slides were common all over the neighborhood. Today we would be fined for such excess. If that is what has happened in 30 years, the next 30 are going to be very interesting as population continues to grow while water is becoming more expensive than gasoline by the gallon (at least when you consider bottled water). The homestead in Yorba Linda is now a subdivision. The orange and avocado groves were cut down to make way for homes in the mid-1980's.

Ponzi: Very interesting remembrances, and perceptive conclusion. If the next 30 years will be like the last 30 in San Diego County, water will be more precious than gasoline. Actually, the situation could be much worse.

But here is San Diego's leadership planning to build a subsidized Chargers stadium and an expanded convention center into a huge national glut, while paying no attention to scientists' warnings about possible water shortages, and paying no attention to other critical problems such as rotting infrastructure and neighborhoods, and cutbacks in important services. Best, Don Bauder

A story in today's L.A. Times reports than California dairy farmers are paying ten times as much for water this year as they did last year. Last year farmers paid $140 per acre-foot of water, this year they are paying $1,200 to $1,800 per acre-foot. 100 dairy farms are going broke every year and many are moving out of state.

Ponzi: The New York Times had the California water crisis on the front page the other day. Best, Don Bauder

Water is clearly getting to be a huge problem in CA. We have been operating too close to the margins without putting enough aside for a (non)rainy day.

Agriculture is the biggest user of water in CA so clearly some major thought needs to be put into whether or not the existing legal and physical water arrangements need to be changed. As the article states, some crops such as almonds require a great deal of water - I'm not sure it really makes sense to grow so much water-intensive food in CA.

And meanwhile development continues to expand.

So we continue to increase water demand, without doing anything to increase supply. In fact, according to many climate models' predictions rainfall will most likely decrease in CA over the next several decades.

We can hope that we get lucky and the drought ends sooner rather than later - otherwise the water problem will continue to get worse. The problem doesn't really seem to be getting the attention it deserves.

ImJustABill: Probably the laws, which steer the water to agriculture, should be changed. On the other hand, we must preserve agriculture in California. Best, Don Bauder

I believe there have been some recent law changes regarding rights to ground water. But overall, I feel like water supply / demand is potentially a crisis in CA (maybe already a crisis) which has lacked a serious debate regarding all potential users and supplies.

But I think I tend to hear more in the news about how residents need to water less and use more efficient toilets - things which help only a tiny bit for the overall water picture.

ImJustABill: Or only getting a glass of water at a restaurant if you ask for one. Yes, not enough attention is being paid to this critical problem. I don't think it is a potential problem. It is here. Best, Don Bauder

That is interesting. They pretty much draw the conclusion that a severe drought won't really be that big a deal because agriculture uses most of the water and agriculture is only a small part of CA's economy.

I would tend to agree with their overall conclusion.

ImJustABill: It's true that agriculture gets the bulk of the water and it is not a big part of the Calfornia economy. But have you read about Tulare County? No pollyanna there. Best, Don Bauder

danfogel: This is a pretty pollyannish story. I hope it doesn't cause Southern California to lollygag on needed reforms. Computer programs can be wrong, you know. Just ask economists. Best, Don Bauder

I'm still not sure I see why there is all the hysterical fuss over watering lawns and taking shorter showers and using low-flush toilets. If CA is serious about saving water then we won't grow things like almonds and alfalfa. Until I hear that water-intensive crops aren't being grown anymore, I'm going to shower for as long as I feel like without any guilt. Maybe even flush my low-flow toilet an extra time just for fun.

Actually, come to think of it maybe this problem is going to get worse before it gets better so I shouldn't be downright wasteful. But I do think that showers and toilets are getting more attention than their potential savings may deserve.