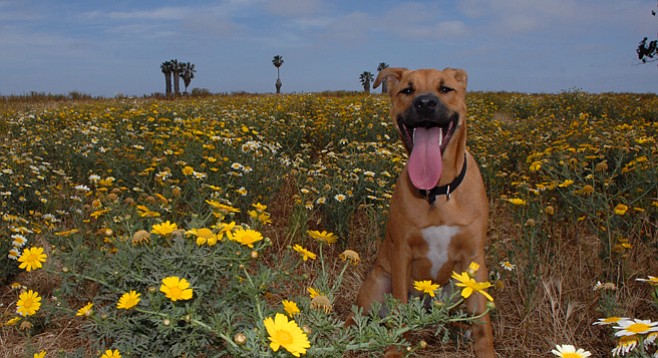 An animal-rights group is suing a retail property owner for First Amendment violations, claiming the owner's management company is prohibiting the group from conducting peaceful demonstrations against a tenant, National City Puppy.

The Animal Protection and Rescue League filed the suit on November 19 in San Diego Superior Court. They say that property owner Bay Plaza has cut them off from using a courtyard on the property to speak out against pet stores selling dogs raised by inhumane large-scale breeders in the Midwest and throughout the states.

Protests by animal-rights activists against National City Puppy's owner, David Salinas, have been ongoing for years. Salinas, who also owns Oceanside Puppy, was forced to close his San Diego location after the city council passed the Companion Animal Protection Ordinance in August 2013. The ordinance banned the sale of dogs, cats, and rabbits at any place other than shelters or non-profit shelters.

Activists have since followed Salinas to National City, where, they say, commercial real estate owner Bay Plaza is trying to silence them from speaking out against puppy mills.

"Defendants have instead purported to bar all expressive activity from Bay Plaza," reads the lawsuit filed by the group's attorney and animal-rights activist Bryan Pease. "The area that activists wish to use in Bay Plaza in order to protest National City Puppy is the area in the mall that, more than anywhere else at the Bay Plaza, is designed and furnished for congregating, relaxation and entertainment, with many tables, chairs and benches."

The property owner objected to the protests on their property. In an October 1 letter from the property-management firm, the manager barred access to members of the Animal Protection and Rescue League.

Pet-store owner Salinas says the activists are nothing more than "terrorists" who will "spit, yell, and verbally assault his customers." Salinas claims customers, scared of confronting the protesters after purchasing a new puppy, have been forced to sneak out of the back door.

"These activists followed them and harassed them the entire way. These people are all paid to protest by large non-profit groups. That's not illegal but it shows they have money and an agenda," Salinas said in a November 21 interview.

"They use the media to spread misinformation that we get our puppies from large puppy mills. What they don't say is where we actually get our puppies from or they don't talk about the ten-year guarantee we provide to new owners. Instead, they file lawsuits and talk to media about the horrors of irresponsible and inhumane breeders. Those are the same tactics that militant groups like Hezbollah uses.

"It's easy to pull on people's heart strings and show you awful pictures; no one wants to see that happen. But, they don't show you the responsible breeders."

Salinas and the Animal Protection League are currently embroiled in a similar legal battle in Oceanside. Salinas says the group managed to unseat a former supporter from the city council and says a ban similar to the one passed in San Diego will likely be up for discussion in the coming months.

"They are not only taking from me my right to run a responsible business," said Salinas, "but are also stripping the people who are looking for a puppy, who don't want to go to a shelter or some unregulated backyard breeder."

Attorney Pease responded, “None of the protesters are paid. They are all passionate individuals volunteering to educate folks about this cruelty. Many groups and individuals are involved. [the Animal Protection League] has not yet organized a single protest against Salinas but is attempting to by first obtaining a court order that we can, since the mall says we can't. Other individuals have been peacefully handing out their own flyers. And no reputable breeder sells animals in a pet store.”

Gee Lenora Aldridge could you go any further in showing yourself to be a twit and a tool?

To compare protesters to "terrorists" is insanity! If you believe these puppies are not coming from puppy mills, well I guess ignorance is bliss! The purchase of puppy mill puppies, encourages the continued irresponsible breeding over population and inhumane treatment of animals. If you really want a puppy, I encouage you to check your local shelters and save a life, There's no shortage of puppies, you just need to look a bit harder. But then that might interfere with tme to flip off protesters! I would guess at least 50% of these puppies will end up in shelters at some point anyway. Most people see only a cute puppy and don't make the time to train and socialize their puppies. It takes time and commitment. But I guess it's wasier to abandon them somewhere when they are no longer cute. And PLEASE, if nothing else, have your puppy spayed or neutered and microchipped!