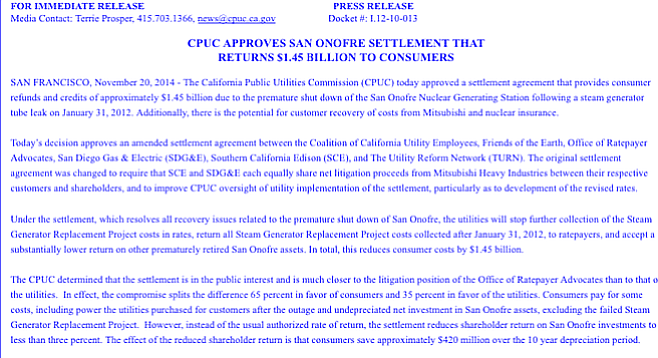 The California Public Utilities Commission this morning (November 20) approved a deal in which ratepayers of Southern California Edison and San Diego Gas & Electric (SDG&E) will get socked with $3.3 billion in costs resulting from San Onofre errors that led to the nuclear facility's shutdown. 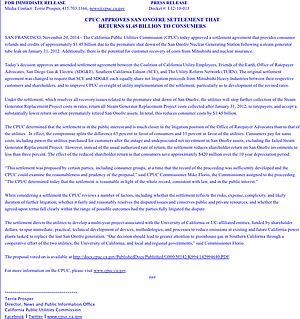 Then, typical of this agency, the utilities commission put out a news release claiming that consumers are getting a refund. Yes, consumers will get a $1.45 billion refund, says San Diego attorney Mike Aguirre, but they will also get hit with new costs of $3.3 billion. Before the decision, Aguirre filed a suit in federal court charging that the utilities commission was planning to take money from customers in violation of the Fifth Amendment's just compensation concept.

The Alliance for Nuclear Responsibility might appeal the decision, according to San Diegan Ray Lutz of Citizens Oversight, who attended the hearing in San Francisco. The utilities commission made last minute changes in the final document (made in red) but the voting commissioners really didn't have time to read the new document, says Lutz. The public could not comment on it.

Commissioners "voted before they could digest the changes," says Lutz, who, like many other ratepayers of San Diego Gas & Electric and Southern California Edison, believe the whole thing has been rigged all along. The public was told that the original proposal was a settlement agreement among Edison, SDG&E, the CPUC's Office of Ratepayer Advocates (which supposedly represents ratepayers) and San Francisco–based purported activist the Utility Reform Network (TURN).

Michael Peevey, president of the commission and former president of Edison, has been criticized for doling out juicy intervenor fees to groups that play ball with the commission, and little or nothing to groups that fight hard for their clients. Aguirre and Lutz believe CPUC commissioners were steering the decision along from the outset — in fact, not permitting a study to be done of the accident causing the shutdown. Such a study is necessary under commission rules, says Aguirre.

After the decision was made, the commission put out a news release with the headline: “CPUC APPROVES SAN ONOFRE SETTLEMENT THAT RETURNS $1.45 BILLION TO CONSUMERS.” There was no mention whatsoever of the $3.3 billion ratepayers would have to cough up. The CPUC's news release even claimed consumers got a better deal than utilities. Lutz, however, notes that the quick passage of the measure was "astonishing but not surprising. The utilities are in control. They got 100 percent of what they wanted."

Says Aguirre, "The federal court and not the CPUC will decide whether ratepayers have to pay. The CPUC has abandoned its duty to protect ratepayers. The news release is false."

It is interesting that the Mill reported this earlier today, about as soon as the announcement was made. The headline refers to $4.8 billion, which is the $3.3 billion sellout added to the spurious $1.5 billion refund. So, the report really doesn't get it right, although if you read the piece, it does tell of the $3.3 billion. Oddly enough, as of a few minutes ago, I cannot find it on the LA Times website. They reported on the UC tuition hike vote to approve, and a flock of other things. Isn't Edison news in LA? Ya' wondah.

Visduh: Keep in mind that SDG&E is a big advertiser in the U-T, which runs puff stories under the utility's byline without telling readers that this is, essentially, paid advertising. This cozy financial relationship with the local utility probably puts a scare into U-T reporters covering Sempra/SDG&E matters. I understand that today the U-T ran a story calling Sempra one of the nation's best-run utilities. That may be true for shareholders (the stock is expensive by almost any measure), but it is totally untrue from the perspective of ratepayers. Best, Don Bauder

What about the lack of a report in the LA Times? Is that paper in the pocket of SCE?

Visduh: I don't read the LA Times enough to comment on that. I have known at least one other instance when the LA Times did a poor job of covering the CPUC/Edison. Best, Don Bauder

8:30 pm and the LAT still has no report on the CPUC ruling. It's full of immigration/amnesty comments though.

On a slightly different note, the "esteemed" UC regents voted for the Napolitano tuition hike formula. Oddly enough, the Guv, the Lt Guv, Toni Atkins, the reelected state supe, and a couple other new regents all opposed the boosts. Bad day for those who have to pay up. The regents had their opportunity to rise to the occasion and take control of the UC back from the administration cabal; yet, they folded. 'Tis a sad day for the UC and for these bodies like CPUC and the UC regents. They could do the right things, and don't. And so the state circles the drain morally and financially.

Visduh: College student debt is a problem that may be close to the seriousness of the mortgage/derivatives insanity that touched off the 2008 financial collapse. Yet colleges and universities keep raising tuition, largely, it is reported, to support fatter bureaucracies. This is bad public policy. Best, Don Bauder

There were changes to the agreement? I guess they had to pass it to see what was in it. Where have I heard that before???

aardvark: You must be referring to Congress. Best, Don Bauder

aardvark: In Congress, the lobbyists write the legislation and the solons often don't even scan it before voting on it. Best, Don Bauder

Don: I guess they are just too busy. Allegedly.

aardvark: Too busy doing what? You know. Best, Don Bauder

seems like they are experts in generating Balderdash, and not so good at generating reasonable rates.

Murphyjunk: The federal lawsuit filed by Mike Aguirre and Mia Severson says that the CPUC's action will cost each citizen $229. That's more than $1000 per electric meter.

This is on top of the fact that SDG&E and Edison both have rates that are among the highest in the nation, if not consistently the highest. Best, Don Bauder

Don: On top of this, isn't SDG&E applying for another rate increase?

aardvark: SDG&E wants to lower fees on large users and raise them on small users. This is so typical of SDG&E and San Diego in general: give a break to the big and the rich and take the money from the poor and middle class, who don't complain.

This move would also further frustrate any transition to rooftop solar, which is essential to energy cost stability and the reduction of greenhouse gases. Rooftop solar is the answer, but utilities are fighting it because it may lower their already-bloated profits. Best, Don Bauder

aardvark: Was that article written by SDG&E, and therefore full of euphemisms? Best, Don Bauder

Don: I just re-read the article. You would almost think it was written by SDG&E. The article was almost trying to make it sound as if they were doing us a favor by only keeping the request at 7.5%

aardvark: Here's how the scam usually works. SDG&E or PG&E or Edison asks for 12%. TURN or UCAN says that is too high. The utility gets 9%, grinning all the way, and TURN and UCAN get fat intervenor fees, as Peevey and Florio chuckle and chuckle, as Wall Street does handsprings. This time, by asking 7.5%, SDG&E is showing it will be happy with 5%. It will probably get 6%, which is far more than it should get. Best, Don Bauder

Murphyjunk: As I have said before, the CPUC smacks of a criminal enterprise. It is all for utilities and delights in screwing ratepayers. That is not its mandate. Best, Don Bauder

start publishing the home addresses of the decision makers and see how fast they "get honest" when the rate payers can confront them in person.

Murphyjunk: There is no way top commissioners will get honest. Forget about any attempt. That would be like making Al Capone into an angel. Best, Don Bauder

Don, you have now convinced me beyond all doubt that Jerry Brown is as corrupt as Peevey.

Not really a surprise anymore since all three of us graduated from Berkeley about the same time, and I know from experience that the Board of Regents and UC administrators are just as corrupt as the CPUC.

These old white guys are drowning California in the same cesspool they live in.

Don, "little people --- wee folk" may be what politicians and bureaucrats have created to replace We The People considering the fact that less than 50% even bothered to vote at all.

Democracy is dead while Oligarchs and False Prophets rule, until climate changes and worldwide violence destroy our future completely.

Anon92107. One of our commenters said we should say,"liberty and justice for a few." Best, Don Bauder