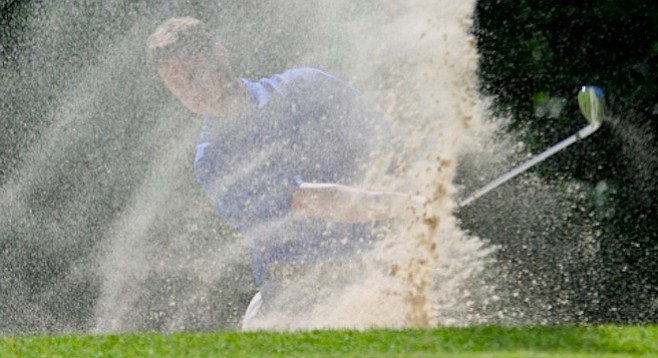 According to the publication Golf Digest, the plan by U-T publisher Douglas Manchester and pro golfer Phil Mickelson to buy Fairbanks Ranch Country Club has collapsed.

The facility, which includes tennis courts and a clubhouse, is on lease from the City of San Diego. Manchester and Mickelson, who signed a letter of intent to buy two months ago, "wanted to do a lot of things to the property, which required they go back and request a lease concession with the city," said Jeff Woolson of CBRE Group, the large commercial real estate company. "Members didn't feel like they wanted to go down that road."

The property is owned by the members, who have not wanted to go through the long process of negotiating a new lease. Manchester had hoped to have a link to his Grand Del Mar hotel facility in Carmel Valley. Rumors that the hotel is having problems surface from time to time. Mickelson, who has complained about high California taxes, recently put his Rancho Santa Fe house on the market for around $6 million.

Gee--that's a shame. Well, not really. I wonder if this story gets any coverage in the Manchester U-T?

aardvark: It's possible the U-T will cover it. Maybe it already has, for all I know. Best, Don Bauder

Don: I haven't seen it yet, but it's hard to find any news in the pages of ads they pass off as a newspaper.

aardvark: So true. What about those so-called news stories that are placed by San Diego Gas & Electric? No indication whatever that these are paid for. This coziness, in turn, influences the paper's soft coverage of SDG&E. Best, Don Bauder

This is the curse of leasing property from a governmental body. If that course was simply owned, free and clear, they would have much more freedom to modify the operation. But, with Dougie's ability to flout zoning regulations and permits at his new resort, I'd have thought he'd get his way with Fairbanks. Maybe it was a lack of money that really scuttled the deal. Mickelson was cleaning up on the pro tour for many years, but how much was he bringing to the table? Or was he there for his name recognition and general good vibe?

Visduh: You are suggesting there is more to the story than that the membership didn't want any tinkering with the lease. You may be right. Best, Don Bauder

With Faulconer as mayor, a Manchester project can easily get around any and all City of San Diego regulations.

So, presumably the deal didn't make financial sense for Manchester even with the giveaway, errr, "lease concession" he would have received from the city.

Matt101: Your suspicions may be right on the money. Best, Don Bauder