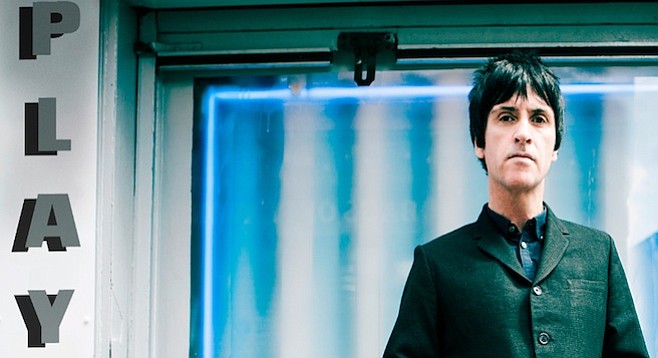 Since the demise of the Smiths, Johnny Marr has worked on collaborations with feverish intensity, so it was no surprise that it took so long for his debut solo record to happen, but it is a surprise that its follow-up appears just one year later.

Opening with the shimmering “Back in the Box,” Marr’s trademark swirling guitar is as engaging as ever. Lead single, the funk-groove-based “Easy Money,” hears Marr decree, “I used to want it all” as he lambasts the “greed is good” mentality.

“The Trap” is New Order plays the Smiths, a delicious ballad that’s gentle on the palette and provides some sugar for the soul.

The title (and stand-out) track is an aggressive pounding post-punk rocker. With a riff that could charm a snake, “Playland” builds itself up to hit the self-destruct button repeatedly.

The intro to “Boys Get Straight” sounds like a distorted sample from Smiths cut “What Difference Does It Make,” but the song quickly severs its ties from the mothership and sails along a rough sea of guitars and new-wave synths. Closing chapter “Little King” is the best record Echo and the Bunnymen haven’t made in years.

Marr’s kids Sonny and Nile provide vocals on several tracks, making the record a family affair. It’s a confident follow-up, even though his voice lacks charisma on its own. But when coupled with that inimitable Marr guitar, it becomes a perfect marriage.