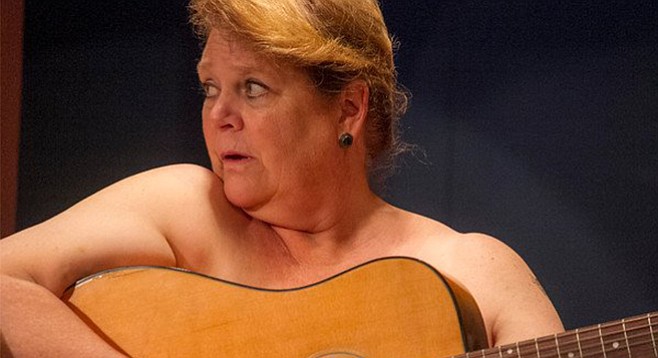 Uneven but heartfelt Calendar Girls debut at the Sullivan Players

Somehow D.J. Sullivan wrangled Tim Firth’s script for Calendar Girls from Samuel French — dispensers (and often hoarders) of the rights — and has staged the local premiere. For a “small” theater to land the play is, in theatrical terms, a coup d’text.

Firth based the comedy and his 2004 movie script on an actual miracle.

When John Richard Baker was diagnosed with leukemia, in 1998, the 54-year-old began sending sunflower seeds to his friends. Plant them, he said, so they would bloom when he recovered. He didn’t.

A group from the Women’s Institute began raising funds to fight leukemia and wondered how best to do ift. Their idea: a partial-Monty. A photographer took a shot of women, ages 45 to 65, at a meeting where they wore only hats. They were carefully covered up, but still.

Someone said they should make a calendar of semi-nude, middle-aged and senior women, actor Glenda Jackson backed the project, and the calendar has raised almost $500,000 a year ever since. 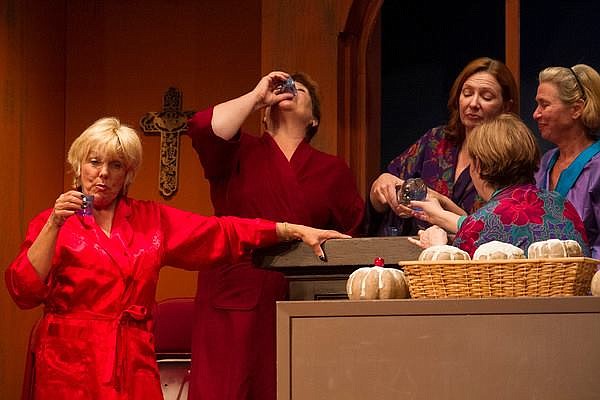 In the play, the W. I. (Women’s Institute) of a small Yorkshire town wants to raise money to honor John’s memory. He loved sunflowers and died of leukemia. They want to buy a settee for the local hospital’s waiting room. But the W.I.’s so staid it offers lectures on the “History of Broccoli,” and last year’s calendar boasted 12 “exciting views” of local churches. As a member observes, it didn’t make enough “to put a splint on a hamster.”

As the idea takes hold, they face all the doubts and nay-sayers and possible mutinies among the ranks. After the photo shoot, they face the perils of international fame.

The play starts slowly. So did the Sullivan Players’ opening night performance. Jitters led to troubles with timing and enunciation. A persistent casualty early on: jokes were garbled, and this is one funny, though uneven script. With a built-in show-stopper.

The play and the production jelled during the photo shoot — so much that it was hard to tell if the actors, about to disrobe, were more nervous than their characters. Led by the indefatigable Dori Salois as Chris, cheerleading all the way, one by one the women faced their fears and abandoned their ingrained, W.I. modesty. The release each felt afterward was palpable in this tastefully done and truly hilarious scene.

Which is a tough one to follow. It comes before the intermission. The second act’s a bit of a letdown; it turns to drama, and the cast could bring more energy to make it work.

Jennie Olson Six, Elaine Miranda, Milena Phillips, Kymri Wilt, and Sandy Hotchkiss make valuable contributions. And Alice Joslyn (who does a blistering version of “Stormy Weather”) is making her debut in a full production? Could of fooled me. She has natural stage instincts.

Two behind-the-scenes efforts merit special mention: Sheila Rosen, who also plays the eccentric Lady Cravenshire, created enough costumes for about 10 fashion shows (the backstage changes must be a madhouse!); the colors and styles define character to a T.

Calendar Girls marks D.J. Sullivan’s last show as a director. The winner of a Craig Noel Lifetime Achievement Award is retiring after 60 years as a director and teacher (and actor: she performed at Swedenborg Hall in 1956). This is the bad news.

The good news: she’ll be doing reader’s theater, is writing a book about acting, and will continue to counsel former students — aka “family,” which numbers in the thousands.