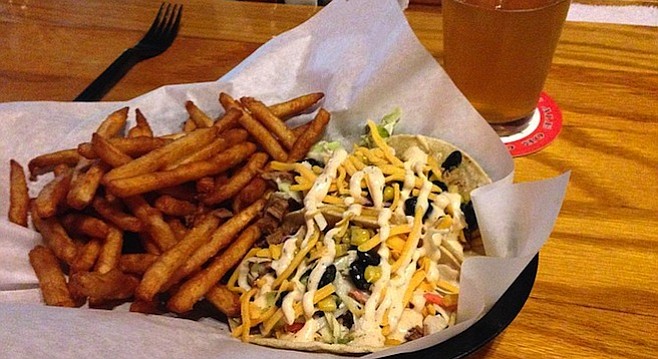 I voted, then left town to drink beer

Finding myself in Alpine at 5pm on election day turned out to be the right move — it was Taco Tuesday at the Alpine Beer Company pub.

I nabbed the last open bar stool — the place had already started to fill up — and tried to figure out which beer I'd be drinking with dinner. I usually deliberate between the celebrated local brewer's regular roster of IPAs: Duet, Pure Hoppiness and Nelson. It looked like they were sold out of bottled Nelson, so I ordered that on tap, knowing I could take a 22-ouncer each of the others to go.

The guy sitting next to me had plenty of opinions about that, encouraging me to try the seasonal Keene Idea double IPA as well. Yeah, no hardship there. Both beers were excellent.

Of course I knew that going in. I wanted to know about the food. The place is a barbecue smokehouse, and the tacos in question this evening were stuffed with brisket and pulled pork, topped by black beans and cole slaw — four bucks each, or two with a side for 10. I opted for a side of beer-battered fries, and no regrets about that.

As for the tacos, they were pretty delicious, with extra points for the brisket, which held more of the smoky savor. Here's my regret: I'd have preferred a plate of it, or even a sandwich. Eating it in a corn tortilla wasn't bad, but for sure the beef was the best part of the taco, and I see myself making the drive back out there to dive right in to a brisket proper.

I'll probably consider doing so again on a weeknight if I can swing it. I know the lines get out of hand on weekends, when San Diego hopheads tend to make the 30-mile pilgrimage to arguably the best brewer in unincorporated San Diego County. But this was a locals' night, when Alpine residents get to have the place (and the beer) mostly to themselves, which would seem to be what Alpine founder Pat Mcilhenney intended. The small, cozy pub feels intimate with a small crowd, and everyone from regulars to bar staff was smiling and friendly, even to this interloper, encouraging me to taste this beer or the next, and offering ribs to sample.

At one point, an Atlanta resident took the seat next to me, having driven straight from Los Angeles, where he'd just concluded a business trip. Not south L.A. either, but West Valley, practically Simi. He had no other reason to come all this way other than to soak up a few ales. I'd call it a noble, even valiant effort. He, too, was given warm welcome on this locals' night, and within minutes had a couple of pints and a half rack of ribs.

It's just a friendly neighborhood bar that happens to serve its own roster of world class beer to people who appreciate every last drop. One regular even suggested I might enjoy mixing some of the beers together. For example, pour some of Alpine's wheat ale, the Willy, to a glass of Nelson and you get a Willy Nelson. Like I needed any other reason to go back. What I needed was a hotel room nearby!

As for the crowds, the rumor flying around the bar Tuesday was that the pub would be getting a new, larger location as early as next spring. Here's hoping they can keep the homey vibe going.