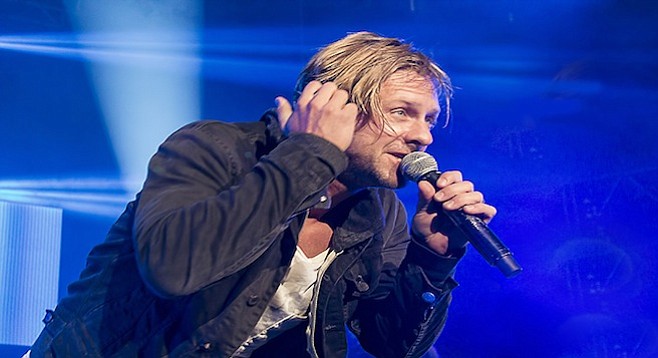 With a only a few stops left on their tour in support of this year’s Fading West record, alternative-rock band Switchfoot was embraced by their hometown crowd at SDSU’s Cal Coast Open Air Theatre. Not even the cloudy weather or drizzle of rain could dampen the excitement of the audience.

In fact, as luck would have it, the sky cleared just as Switchfoot kicked off their 15-song set. A light show featuring popping strobes and colored lasers magnified the experience. The SoCal natives delivered an energetic performance that seamlessly transitioned from several rocking tunes into the striking “Let It Out.”

Interaction with the audience is a hallmark of Switchfoot's live shows. Frontman Jon Foreman connected with the fans by strolling into the crowd. He sang, gave high fives, took selfies, and even shared his microphone. Then Foreman stopped to shake the hand of a soldier and thank him for his military service.

At one point, Keith Tutt, a local cello player, took over the stage and performed a moving cello solo. The piece was so effective that when Tutt finished, it prompted Foreman to ask everyone to hug the person next to them, which most did. Tutt then played two more songs, “Only Hope,” another solo, followed by, “Dare You to Move,” with the rest of the band. As “Dare You to Move” began, the audience became a sea of brightened cell phone screens lighting up the air.