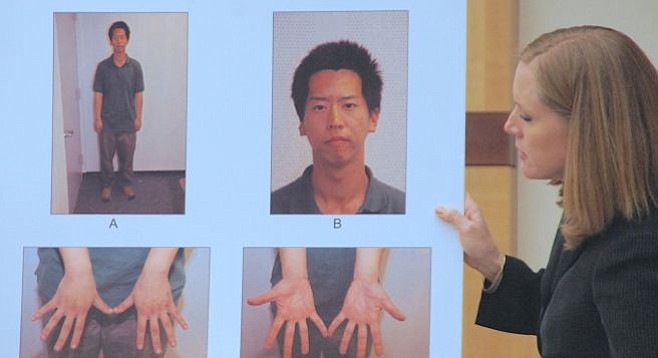 Maybe crazy, but not insane

Bryan Chang declared sane at the time he killed his mother

After Bryan Chang admitted killing his mother, four years later, the question became: was he crazy when he killed her? This morning, November 6, after a three-week trial, a jury declared that Chang was sane when he killed his mom, Sherry Chu Chang, on January 25, 2010.

Bryan was 28 years old when he killed his 60-year-old mother. Investigators found her dismembered body inside her home at 966 Santa Florencia in Solana Beach after she failed to show up for work.

Sherry’s only child, Bryan, has been held in custody and evaluated by different mental health experts over the years. He pleaded guilty to first-degree murder one month ago, and two weeks later attorneys began to present evidence in a sanity trial, to a jury of seven women and 5 men.

In California there is a presumption of sanity, so for this trial the defense attorney had the burden of proof. The threshold is not “beyond a reasonable doubt” but instead it is “more likely than not” that he was legally insane; attorneys say that means “more than fifty percent.” 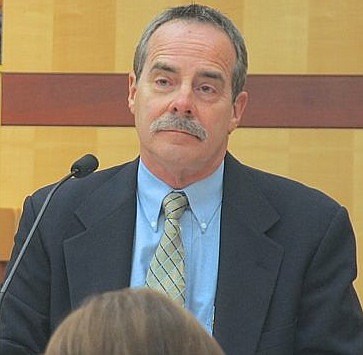 One of the mental health experts called to testify by the defense was a psychologist and psychotherapist named Dr. Clark Clipson, PhD.

Clipson said he interviewed Bryan for several hours in February of this year, plus he reviewed reports of other mental health experts, and he considered evidence gathered by investigators. Clipson concluded “it was not a planned event, it was an impulsive event.” And the doctor believes that Bryan “committed the crime in response to delusional beliefs.”

Clipson made note of “the exaggerated effort that went into killing his mother.” The many, many hammer blows on the body meant Bryan “went farther than necessary to kill her.” The doctor said the dismemberment of the body and the fact that one of Sherry’s arms was found in the refrigerator “did not make any sense to me.” The doctor described these as “inconsistencies in behavior,” which fit into his conclusions that Bryan is “schizophrenic.” On cross-examination by prosecutor Rachel Solov, the psychotherapist did concur that “the exaggerated effort” or overkill could also happen in an act of rage. 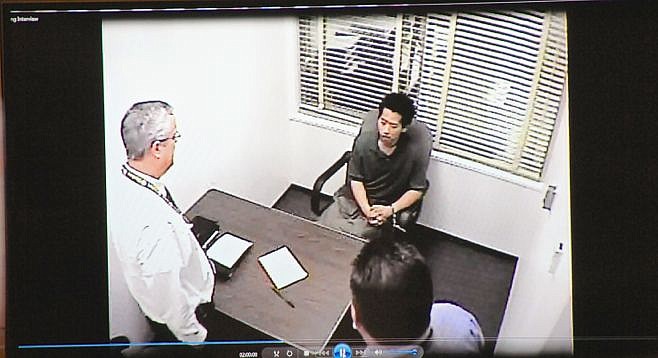 Clipson said he reviewed a video recording of two detectives interviewing Bryan the same day he was arrested, which was two days after Sherry’s body was found. In that interview, Bryan first denied he had been at his mother’s home, and then he said his mother was fine and asleep when he left, and near the end of the interview, when detectives accused him of his mother’s murder, Bryan suggested that his father or his uncle could have committed the crime. Clipson described Bryan’s lies and evasions as “immature and unsophisticated”; he said these showed “lack of logical thinking.” The doctor said, “He was like a five-year-old child caught in the cookie jar.”

Two other mental health experts, doctors Judith Meyers and Allan Abrams, also spoke with Bryan. When asked how he felt about his mother, Bryan reportedly said: “I felt like she was a threatening presence” and “It was an overwhelming presence, making it difficult to live.” It was so bad, Bryan said it was “difficult to breathe.” Bryan reportedly said: “I felt like I had to defend myself against her.” Bryan was asked what would have happened if she wasn’t killed? His response was said to be: “I would have been completely debilitated.” One doctor noted: “He felt the only way he could avoid becoming mentally crippled was to attack her.”

One of the doctors asked Bryan how he felt after the killing, and he replied: “Some of the feelings subsided. I stabilized somewhat.” Bryan admitted that he took a hammer and hit his mother, but he could only recall hitting her twice. When he was asked if they had been arguing about money or a car, he answered, “Money was never an issue.”

Dr. Clipson concluded that Bryan was insane at the time he killed his mother because Bryan believed that if he did not attack her, in essence he would become crippled. It seemed a self-defense-insanity position. Clipson said because Bryan believed that his own well-being was threatened, he then lost the ability to discern that it was morally wrong to kill his mother, and that met the legal definition of insanity.

Prosecutor Rachel Solov started her questioning by asking if persons who have been committed to a mental health hospital can apply for release after 180 days of treatment, and Clipson did confirm that was true. Clipson stated that about one percent of the population gets diagnosed with schizophrenia and that “most” of those people do not commit crimes. The doctor said he performed a test on Bryan Chang that is designed to determine if a person is malingering, and he concluded that Chang was not. (Malingering is the term for faking insanity.) When asked why he lied to the detectives, Bryan reportedly said, “I was trying not to go to jail.”

And Bryan is said to have admitted: “It’s something I should not have done” because it is “wrong” and “against the law.” And he admitted that he took the hammer, the murder weapon, with him when he returned to his apartment in Los Angeles County, and he threw it in the trash. 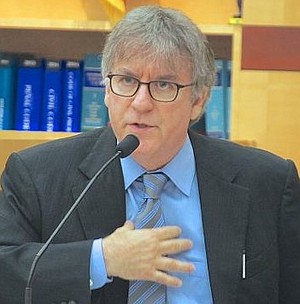 One of the witnesses who testified for the prosecution was Steven Andrew Ornish, MD, a forensic psychiatrist. Ornish’s request to interview Bryan was declined, so his sources of information were the reports made by other experts, the recorded interview with detectives, emails between Sherry and Bryan, and other research by investigators. When Ornish looked at the interview Bryan had with detectives, he noted, “There is a pattern, where his lies are really self-serving, to cover up his role in the homicide.” Ornish found the deceit important because it showed “he knows what reality is” and Bryan performed a “cognitively complex task.” Ornish believed that Bryan acted out in anger and rage toward his mother, and he found “evidence of escalating conflicts with his mom over his spending.”

Ornish opined that brutal homicides commonly have irrational qualities, and the brutality of the crime should have caused details to be seared into Bryan’s brain, instead of becoming part of his “dissociative amnesia.” Ornish concluded that, “Despite his symptoms of his schizophrenia, he could distinguish right from wrong at the time he killed his mother.”

All of the mental health experts who looked at this case agreed that Bryan is schizophrenic and showed symptoms of delusions and anxiety. The experts further agreed that he suffers from “mental defect” and that he had “psychotic symptoms.” But the legal standard for sanity as defined by the State of California is more a legal definition than a clinical determination. Ornish determined that at the time he killed his mother, Bryan understood the quality and nature of his act: he knew it was his mother, and he knew that striking her with a hammer would cause her death. In Ornish’s opinion, although Bryan had “mental defect” he could still distinguish right from wrong.

Defense attorney Kathleen Cannon told the jury, “Look at the killing. It’s crazy. It’s extreme.” The defender hoped the jury would agree, “He is driven to such a brink.” She aggressively asserted “it is more likely than not” that Bryan killed his mother in the midst of one of his insane delusions.

“Clearly he is mentally ill,” prosecutor Rachel Solov agreed when she made her final argument. But she asserted that even a mentally ill person can distinguish right from wrong. She reminded the jury that they saw in the recorded interview that Bryan told detectives whoever murdered his mother should go to jail.

The prosecutor suggested that the fatal confrontation happened because “He wanted to smoke dope and not work and not go to school and live off his mother.”

“Use your common sense,” the prosecutor urged before the jury went away to deliberate.

The statutory sentence for first degree murder is 25 years to life, according to both attorneys. Judge Harry Elias, who heard the trial, will pronounce sentence on January 13 in San Diego’s North County Superior Courthouse, in Vista.

After the verdict, Juror Number Four spoke to news reporters in the hallway. He said they discussed the proof threshold of "more likely than not." And he declared, "We don't really know what happened in that house," and he mentioned suggestions made during trial -- that the killing was an emotional outburst or in anger. Juror Number Four said that whether there was an argument about "the car or money was not important." 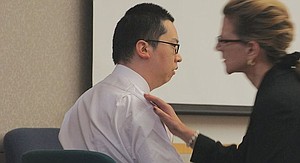 This was an excellent piece of reporting that made about as much sense out of the medical testimony as could ever be expected. The jury had a tough job, and too often make a mess of such proceedings. (We've had some gross miscarriages of justice in recent years, such as the second Tuite trial, this Julie Harper imbroglio, and a couple others.)

The description of the juror's comments come across as incoherent. I know that some folks just cannot speak normally when under pressure. But if he was willing to talk, why not find some sheltered venue? Indeed, what is going on?

The impression from Juror Number Four was that the group was not distracted, trying to figure out exactly what happened just before Sherry got hammered to death. That is, was there an angry confrontation over money, or about Bryan pestering his mom to borrow her car? Instead, jurors focused attention on the legal technicalities, such as the proof threshold for the legal definition of insanity. Not to put words in anybody's mouth, this was an impression from his comments. And thanks for the kind words, Visduh.