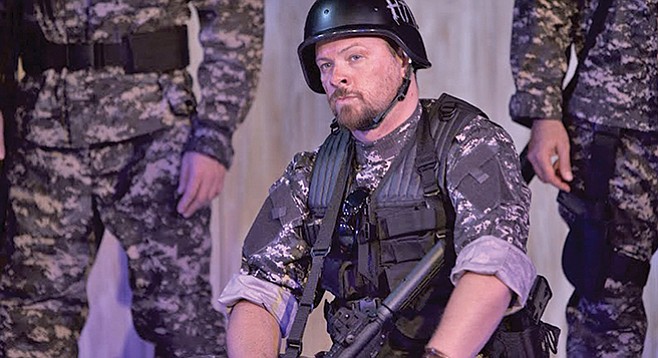 He abandoned his sack-swilling, lowlife chums and is now serious royalty.

Jessica John enters as the Chorus for Shakespeare’s Henry V. She’s dressed for business success. As if seeing the stage for the first time, she stops cold. The space is empty, save for a low-budget, drab-brown, pseudo-kingly chair and half-hidden French and English flags peeking behind plywood paneled walls. John shrugs. This is New Fortune Theatre’s set — for our inaugural production? Where are the towers of London and the “vasty fields” of France? Where’s the pomp, the pageantry, the cast of thousands?

You couldn’t play handball in here, let alone re-create the Battle of Agincourt where King Henry’s ill-fed, infirm, and outnumbered troops defeated the French army in 1415.

New Fortune’s obviously outnumbered and needs help. So John roars into Shakespeare’s famous prologue and recruits the audience. “Piece out our imperfections with your thoughts,” she says. The words will be the pigments, the canvas, your imagination. Co-create the saga with the Bard.

Throughout, the Chorus bemoans the paltry limitations of theater — even the author’s “rough an all-unable pen” — and then paints epic scenes with words. But s/he’s not alone. Henry V may be Shakespeare’s most descriptive play. He uses more “word scenery,” visually evocative language, than almost anywhere else. All of which requires audience-participation, and much of which usually gets cut.

New Fortune makes many bold statements. The acting, quite polished for an opening night, was always assertive and assured — and aggressively physical. Maybe the most impressive statement: the cast performed most of the text (even the early, lengthy discussion of Salic law, often the first shoved into the shredding machine). And the Chorus isn’t the only scene-painter. Almost every character has at least one passage alive with in-the-moment history. The play unfolds, in fact, like an oral history of scenes from the era.

Most productions have a definite take on King Henry. He’s either “this Star of England,” the kingliest of kings, or, beneath the rhetoric, a cold, manipulative, empire-monger. But Henry’s actually in transition. He abandoned his sack-swilling, lowlife chums — Fat Jack Falstaff among them — and is now serious royalty. But his father usurped the throne, and young Henry needs to validate his claim.

He must also find out what it means to be a king. In this manner he resembles a new president taking office. It’s no longer a hypothetical promise. It’s here, real. So now what?

One of the many fascinations in Richard Baird’s complex, deep, and amazing performance: his Henry does an on-the-job-training for the “role.” He’s a quick study. He makes moves people will deplore (ordering French prisoners killed, for one, which also kills the possibility of them being ransomed), and others that earn him glory.

I will always believe that Shakespeare’s characters don’t have just two sides. They have at least 12, like a zodiac. In scene after scene, Baird reveals another, often contradictory side: he does a quick, public face promo for TV; he questions, Hamlet-like, who and where he is; he’s as brash as Hotspur (who, like Falstaff, he must also “kill”); he’s humble on the eve of battle in a borrowed cloak; he’s fearless in the field (and was, in the battle of Agincourt); and in the end he melts, almost speechless, before Katherine of France and finds the emotional courage to open up his heart.

In Baird’s excellent performance, King Henry’s as diverse as the kingdom he tries to unite. His subjects speak a linguistic hodgepodge of languages and accents and must set aside lifelong animosities to win the day. New Fortune’s look also reflects this Babel of differences. It’s in modern dress, with military fatigues and helmets (King Henry’s has “HAL” scraped on one side), but with suggestions of yesteryear: uniforms from then and now, and smarmy Pistol’s flintlock “pirate pistol.”

Matt Lescault-Wood’s terrific sound design rattles the stage with war: guns crack and cackle, bombs boom, jets pierce the air loud enough to make you want to duck. No need to “piece together” any “imperfections”; they come in full roar.

Director Baird has melded a group of talented local veterans into a tight ensemble. Some may be new to Shakespeare, but it doesn’t show (Jessica John, Dana Hooley, Walter Murray, and Rachael VanWormer, among others, perform is if to the Bard of Avon born). And all are fully committed to the project.

Henry V gets picked at as much, if not more, than Shakespeare’s other plays. The numbers are wrong for the battle (odds probably closer to two-to-one than Exeter’s six-); Henry’s too idealized, etc. New Fortune opened the play on St. Crispin’s Day, 599 years after the Battle of Agincourt to the day. And the company’s namesake may also provide a clue to the play’s meaning.

How, philosophers have asked since the dawn of thought, do you account for the random, the capricious, the unaccountable? An answer that comes down through the ages (and even a popular TV show): Fortune’s Wheel. Dame Fortuna, while trying to balance herself on a round, slippery rock with her eyes blindfolded, spins the wheel and things change for no logical reason. Some ascend, others tumble, topsy-turvy. The result is “Fate.”

Philosophers have called her “cruel,” “unstable,” and “insane” because she shows no favorites. In The Consolation of Philosophy, Boethius cautions his readers: “Are you trying to stay the force of her turning wheel? Ah! Dull-witted mortal, if Fortune begin to stay still, she is no longer Fortune.”

At the end of Henry V, the victorious King stands at the very top of Fortune’s Wheel. He has it all. Then the Chorus speaks the Epilogue: “Fortune made his sword/ By which the world’s best garden he achieved.” But the echo of Eden fades quickly. Henry died young (age 35 or 36), and his successor “mangled” things so badly that “they lost France and made his England bleed.” Dame Fortuna spun her wheel.

With regard to the New Fortune Theatre, may she snooze for decades, and may the rising, greatly welcomed company flourish.