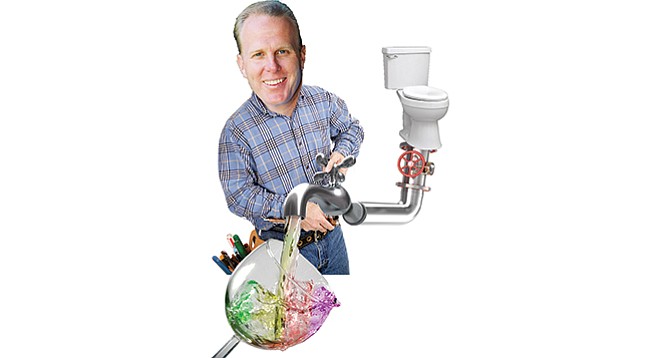 Formerly known as toilet-to-tap, the ongoing initiative by GOP mayor Kevin Faulconer to turn the city’s sewage water into a drinkable liquid has become a major moneymaker for local lobbyists. “An initial 15-million gallon per day water purification facility is planned to be in operation by 2023,” says the city’s website of what has been renamed the “Pure Water” program. “The long term goal, producing 83 million gallons of purified water per day (one third of San Diego’s future drinking water supply), is planned to be reached by 2035.”

To get a piece of the action, Broomfield, Colorado engineering firm MWH Global has paid the Clay Company $19,000 to help it obtain a contract for “as-needed Engineering Technical Services Consultant for Pure Water San Diego Program.” Clay lobbyists Maddy Kilkenny and Stephanie Saathoff reported giving $250 each to the city-council campaign of Democrat Carol Kim, according to the firm’s October 27 disclosure filing.

I can't believe toilet water can be "purified" enough for healthy human consumption. They can't remove all disgusting elements and it will be loaded with chlorine or chemicals they say is safe limits. Hope they enjoy their own chemical cocktail.

Toilet water is purified and recycled on the International Space Station.

shirleyberan, Have you ever been to Orange County? If so, then you're drinking water that contains purified wastewater. Since about 2008 Orange County has been using a system that replenishes the groundwater basin with 70 million gallons of treated effluent every day. Want something closer to home? Ever heard of the Water Purification Demonstration Project? It was the fore runner to the pure water program. For about 4 yrs, every day about a million gallons of treated waste water was pumped into the San Vicente Reservoir which goes into a standard drinking water treatment plant. So yeah, you have been drinking treated waste water. You just didn't know it.

Basic water management 101 states that one of the primary functions of public water utility is to make sure their customers TRUST that the water from their tap is safe to drink. I regret to say that nothing is this article makes me gives me a warm fuzzy trusting feeling that the public's well-fair is being properly taken care of. Perhaps it is time, for those utilities employing such recycled water, to declare their tap water as "not safe to drink -- drink at your own risk". Notify the consumers, who are directly impacted and to require such processes to be revealed when property gets purchased within the sphere of influence of such water treatment schemes. It is no longer adequate to say that some sort of source water meets USEPA or CA drinking water regulations -- those "standards" are merely the bare minimum and omit a lot! Furthermore, you can not test for harmful substances if you don't know what constituents to test for, to begin with. We certainly don't know everything; wouldn't it be better to error on the side of caution? Viruses mutate, chemicals degrade and recombine in ways that aren't even currently being looked for. Consequently, it could take years for say a type of carcinogen/pathogen to clinically manifest itself within a given population group, while continuously being consumed by the public. I am sure that the "solution" presented is one of the least expensive but certainly not the best from a public health perspective.

danfogel - I know I saw (chunks) particles in West Hollywood water when I spent some time there a couple of years ago. I don't drink tap water anywhere. I don't like the taste. I buy spring water and have to believe some of it actually originates from a clean source.

shirleyberan To each there own. Ya know what they say, 10 million dogs can't be wrong. LOL. FYI, WeHo gets it's water from DWP. Ninety percent of their water comes from either the Sierra Nevadas or the Colorado River. What ground water the do use comes from a different source that the one in Orange County. Different water, different chunks. LOL BTW, what do you cook and bathe with?

And FYI y'all, I used only spring water for seven goldfish (in a 20 gallon aquarium) that grew big and lived 9-10 years.