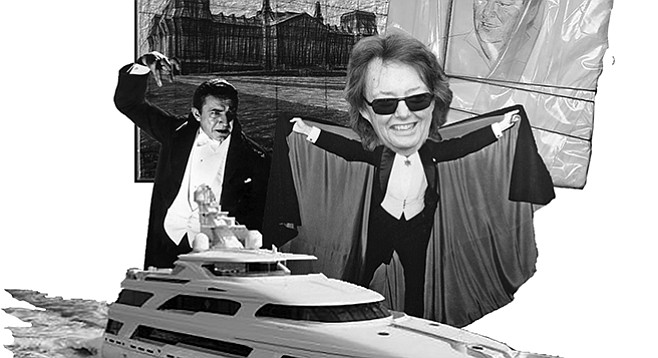 Inevitable: death and board fees

Local charities hoping for a fat payout from the newly enriched David C. Copley Foundation may be a bit disappointed by the non-profit’s recent report for 2013. After the November 2012 death of the onetime Union-Tribune owner in an Aston Martin crash following a heart attack, his estate began a quick sell-off of his substantial real estate assets, including a former Bela Lugosi mansion in Los Angeles and a house on the ocean in Mission Beach. A yacht named Happy Days, which reportedly cost $33 million to build, also went on the block. Then, earlier this year, the David C. Copley Foundation set up a website inviting worthy non-profits to apply for grants: “The Foundation provides funding for responsible, creative charitable and civic organizations focusing on community, culture and arts, education, medical and health, and youth development....” The announcement added that before his death Copley had named the foundation “as the sole residuary beneficiary of his estate,” and the prospect of a fresh infusion of charity money had the mouths of non-profit executives here watering.

Now, in a disclosure filed August 26 with the U.S. Internal Revenue Service and recently posted online, the foundation has revealed that it received a total of $42,963,927 from Copley’s estate during 2013. (including $2,259,758 in an IRA account held at JP Morgan Chase). In addition to the cash, the foundation got three paintings by Copley’s favorite artist Christo valued at $220,000, and 240 costume sketches worth $480,000.

It made a total of $1,859,583 worth of charitable contributions, including $558,333 to the Copley Family YMCA on Landis Street. The Christo paintings went to the Museum of Contemporary Art San Diego and the costume sketches to UCLA, where Copley endowed a movie costume design program before his death. Future earmarks include $3,141,667 in “building construction funds” for the Copley Family YMCA and $500,000 to Sharp Healthcare, where Copley got a heart transplant in 2005.

How the rest of the pie will be divided remains to be seen. More money may be raised by sale and development of remaining Copley property, including the 8¼-acre La Jolla estate of Copley’s late mother Helen Copley, known as “Fox Hill,” listed at $28 million in January of this year, as well as an adjacent 24 acres of vacant land the estate has been trying to subdivide into lots for mini-mansions, prices of which are not yet set. According to the Wall Street Journal, Fox Hill has “a gym, a guesthouse, a courtyard with a pool, and a pool house. The grounds include a large circular motor court and two garages with space for 12 cars, as well as an orchard, vegetable and flower gardens and wooded paths.” Copley’s own “Fox Hole,” a complex of extravagantly redone cottages he knitted together down the hill from his mother’s estate, was sold for $5,318,000 on October 23, according to Realtor.com. The original April 2013 asking price was $7.95 million. Meanwhile, the foundation board, chiefly populated by Copley Press veterans, is pocketing a little cash for itself. Chuck Patrick, Dean Dwyer, and Robert Crouch each got $12,500, as did La Jolla real estate lawyer Eric Freeberg. Chief operating officer Kimberly Koch received $7,627, according to the report.

"Local charities hoping for a fat payout from the newly enriched David C. Copley Foundation may be a bit disappointed by the non-profit’s recent report for 2013."

Why would they be disappointed? The foundation has sold many millions of dollars worth of assets and has millions more to be liquidated, and the foundation board members got only a grand a month or less, small compensation for the responsibility of overseeing a multi-million dollar charitable foundation..

Sounds like the DCC foundation is being run a lot better (and more transparently) than, say, the Robert Peterson Foundation run (into the ground) by loveable liberal former San Diego Mayor Maureen O'Connor.

Sounds like this Copley foundation is doing what one would hope: converting assets to cash, maintaining low administrative costs and taking a measured approach to donations.

Agreed. I think many of us assumed that his estate, and hence the foundation, would be worth far more than the amounts now reported. After all, not to long prior to his death, David was considered a billionaire. Of course, much of that was attributed to the U-T, and by the time he liquidated the paper, it was nearly worthless.

To date, the biggest beneficiary is the Copley Family YMCA, but it isn't obvious that it will continue to get the largest grants. The trustees, if they are doing their jobs, and it appears that they are, are being compensated very conservatively.