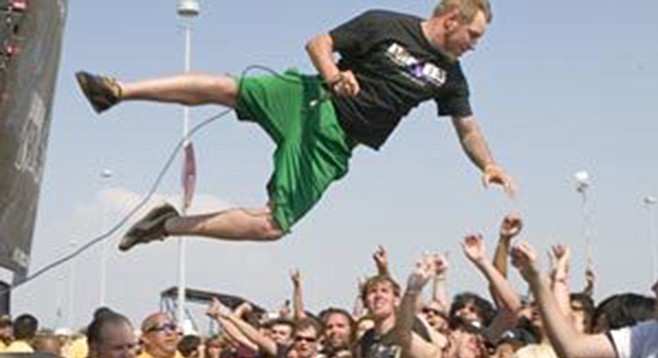 36 Crazyfists brings metal you can almost sing along to

When you read about the history of this Alaskan metal band, you have to wonder whether they borrowed their name from Jackie Chan and the 36 Crazy Fists due to the underdog-comes-from-behind plot of the film. In it, the hero learns kung fu from a nut job in a vainglorious effort to redress the death of his father. Likewise, death has both followed and impacted 36 Crazyfists. One could argue that the roots of the band stem all the way back to a 1994 murder in an Anchorage nightclub. In January of that year, a 27-year-old drummer named Dave Monson was stabbed to death in the Underground Bar. His friends organized a benefit show for the locals. Fellow musicians showed up to jam and, although they couldn’t have predicted the outcome, that stage is now considered to be the very first 36 Crazyfists gig ever. Two years later, founding bassist J.D. Stewart died in a car crash. But the band did not fold. Instead, they hung in there and got another bassist, even though Stewart was at times more of a showman than singer Brock Lindow.

Now, the four-piece includes founders Lindow and guitarist Steve Holt. They have aged gracefully to the point where they resemble the kinds of backwoods travelers you might encounter on a bass-fishing reality-TV show or find deep in the wilderness with high-powered crossbows. Their music’s taken a turn away from the hardcore sound of years past toward a grown-up metal that is far more melodic...radio-friendly, even. Think: metal you can almost sing along to, a shift that is likely to have pissed off the fans of 36CF’s early stuff. Still, they’ve never seemed to have a problem getting a label for any of their CDs, and the musicianship has always been exquisite. Not familiar? Understood. But to their fans, 36CF looms huge.