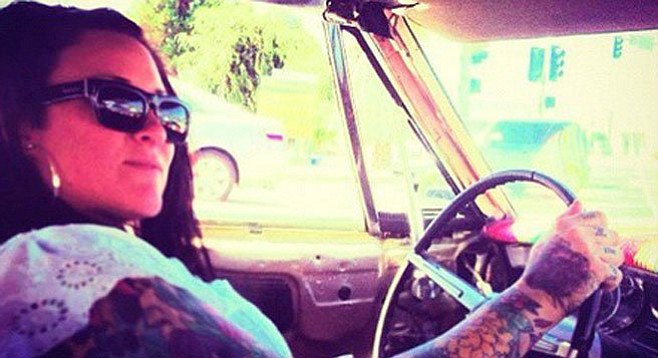 “The show was canceled because there was no electricity. It was, ‘Sorry, no show tonight.’ But it was a great place to play.”

Shortly after that show, other bands that were booked to play the Sports Arena area club started calling around, looking for replacement gigs. They were told their November/December shows at the Shakedown weren’t going to happen.

“There’s not too much to say other than I tried my best,” Shakedown owner/booker Anilee Griffin tells the Reader. “[I] Worked my hardest to keep it going, but the San Diego music scene is tough. We don’t have much foot traffic so I relied only on music, but it wasn’t enough. I gave it my heart and soul. It was never about money, just about supporting live music.”

Before she took over the Shakedown, Griffin booked the talent for the Flying Elephant in Carlsbad. She oversaw the 200-capacity punk rock/rockabilly/metal bar for two years. Before that, the Shakedown was owned and operated by “Dead Ted” Thompson, who annointed the bar as a place for “Booze, Bikes, Bands, Broads, and Rods.”

In years past, the location housed the Rhythm Lounge and a strip bar called the Doll House.

“I really liked the place,” says L.A.-based talent agent Brando Von Badsville, who sent touring bands such as Gambler’s Mark, Cold Blue Rebels, and the Quakes down to play the Shakedown. “If I lived in San Diego, I would have hung out there all the time. They really treated all their bands well.” Von Badsville says that now he will probably call on Til-Two or the Soda Bar.

Stealth Jackson’s Wheeler says he will miss the Shakedown partly for what it wasn’t: a pay-to-play bar. He says the best model for a bar with live bands is to pay bands based on how many heads they get through the door, not paying for a block of tickets in advance.

Bassist Mike Muellenberg agrees. He plays bass in League of Liars, which played just before Stealth Jackson in that swan-song show. “A lot of bars expect the bands to come up with money up front. A lot of us just don’t have the funds.” He says the Shakedown didn’t shake them down for pre-sales. “The Shakedown was a dive bar, but it was not as divey as some I’ve been in.”