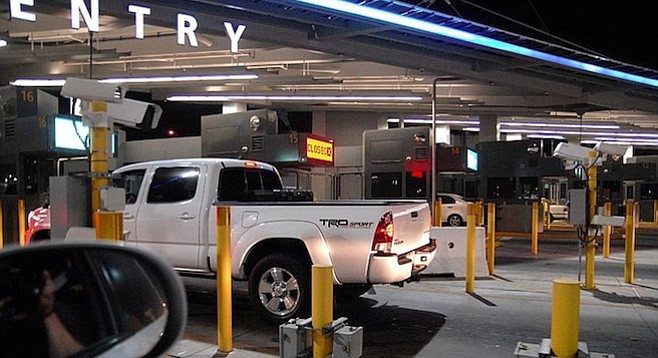 And sometimes longer lines in the SENTRI lanes — say whaaa?!

With the reopening of seven northbound inspection lanes in September, commuters entering the U.S through the San Ysidro Land Port of Entry have experienced dramatically shorter wait times.

According to a U.S. General Services Administration fact sheet, the reopening of those lanes marks the completion of Phase 1B of the three-phased San Ysidro Land Port of Entry Expansion Project, which is slated to be completed by January 2018. Upon completion, the world’s busiest land-border crossing will have a total of 34 lanes and 63 inspection booths.

A Tijuana resident who drives her child across the border each day said it used to take her up to 2.5 hours to cross the border; now she’s in San Ysidro in about 25 minutes. Being able to get to the border at 7:00 a.m. and not at 5:00 a.m. is a luxury that many a border-crosser appreciates.

A San Diego resident who spent Saturday night in Tijuana said it took her about 30 minutes to cross the border the next day at around 1:30 p.m. Historically, the period between Sunday afternoon and Monday morning had been the worst for commuters, with wait times of up to four hours.

Wanting to validate the comments I got from the several commuters, I decided to take several trips down to Tijuana recently. On my first trip (a Wednesday), I got to the San Ysidro border at around 7:30 p.m. on my way back. At that time there were only about two cars per lane, which meant that I was in San Ysidro in a couple of minutes. Crossing into the U.S. the following Saturday at around 6:00 p.m. took me an hour and 50 minutes, which in a way is not terrible, considering that in the past, crossing that same day would have taken me an average of three hours. Others mentioned that it typically takes them about 30 minutes to cross on a Saturday, though. The following Monday at around 11:00 a.m. I drove across the border in 35 minutes.

Most of the commuters I talked to explained that they normally use the Ready Lanes, but even the general lanes, which are normally longer, seemed to have a low amount of traffic on the days that I crossed. A commuter with a SENTRI Pass mentioned that nowadays there are times when the Ready Lanes have less traffic than the SENTRI lanes.

"A Tijuana resident who drives her child across the border each day" And why is that? Free taxpayer funded school?

There are U.S citizens and green card holders who live in Tijuana and take their children to schools in the U.S. Technically, they're still Tijuana residents.

Every person who is a legal resident or US Citizen and works in the US is a taxpayer, regardless of where they live. Mexican citizens who attend school in the US pay non-resident tuition.