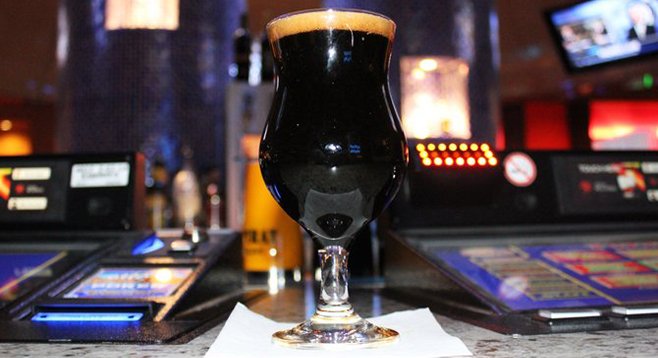 Anybody entering a casino is taking their chances to some extent. This luck-pressing should not extend to patrons looking for a quality beverage. Such is the thinking behind Corked, a new bar at the recently renovated and expanded Harrah’s Resort Southern California (777 Harrahs Rincon Way, Valley Center). Beverage director Will Burtner is a certified sommelier with an eye for the finer things. But unlike most “wine guys,” his optics aren’t trained exclusively on vino. In fact, when not on the clock, it’s not out of the ordinary to find him in one of the vast array of brewery tasting rooms near his home in Vista.

Corked provides the opportunity for Burtner to give the many brewery merch-clad casino-goers he sees on a daily basis, as well as those who have yet to peek behind the Bud-Coors-Miller curtain, a taste of his favorite craft offerings. Many are selected from San Diego County brewing companies, but there is also heavy influence from Burtner’s old Northern California stomping grounds. A recent visit turned up offerings from Ballast Point, Stone, Mother Earth, and even the delectable AleSmith Speedway Stout in large bottle format.

In the end, it was an old standby that won me over — Iron Fist Velvet Glove Imperial Stout. It’s been my favorite beer produced by Iron Fist Brewing Company (which, not so coincidentally, is two blocks from Burtner’s residence) since the company opened three years ago. This time around, it tasted a bit different. The dark chocolate overtones that come across so nicely were fully intact, but there were added notes, similar to tobacco, and reminiscent of the “tinder box” nuances described in certain red wines. It was a brilliant taste experience that went far beyond any beer-related occurrence I’ve previously experienced in a Southern California casino.