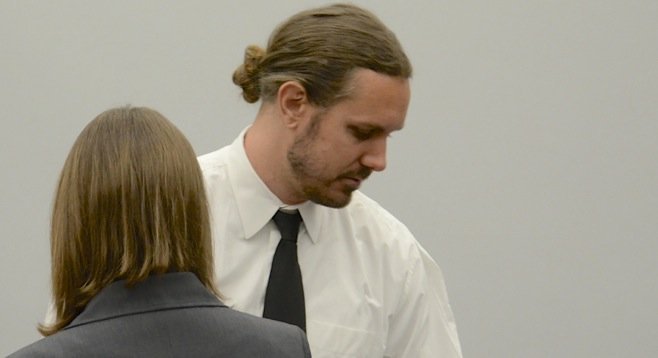 The sentencing of Tim Lambesis for soliciting a hit man to kill his wife was delayed two weeks, from this morning, May 2, until May 16.

The As I Lay Dying frontman and admitted would-be-assassin only spoke one word to the judge today, “Yeah,” when he confirmed that he would show up on the future date.

Lambesis pleaded guilty to a single felony charge, solicitation of murder, last February. The maximum possible sentence is nine years, according to the prosecutor, Claudia Grasso.

On the day of sentencing, it is expected that the family of the victim, wife Meggan, will speak to the court.

Lambesis solicited the assassination of his wife from a trainer at a gym called Pure Fitness, located in Carlsbad. That trainer turned him down but then contacted police, who set up a sting. The fake hit man allegedly asked a fee of $20,000.

Lambesis was arrested at a bookstore in Oceanside on May 7, 2013, after he handed an envelope to an undercover agent containing photos of his wife, cash, and gate codes to her condo.

Meggan Lambesis had filed divorce paperwork eight months earlier. Tim allegedly complained she would not let him take the kids on tour with him and that she was spending all the money on divorce attorneys.

Tim Lambesis, now 33, was in custody 24 days before posting $2 million bail. He has been at liberty for almost a year, on house arrest, wearing a GPS monitor.

Lambesis’s lawyers have suggested that his behavior changed after he began taking steroids at the gym.

Tim Lambesis is next due in San Diego’s North County Superior Courthouse on May 16.

Brick by Brick is in play

No explanation was given for the delay of sentencing. "I am not at liberty to say why the sentencing was moved two weeks," prosecutor Claudia Grasso said after the hearing, adding that May 16 is "a firm date."
The deputy district attorney did confirm that the victim is expected to be in court. "Yes, Meggan is expected to speak at the sentencing," the prosecutor stated. 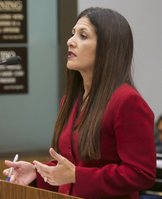 An obvious guess as for delay of sentencing is that his lawyer is still getting paid to perform a service and at this point in Tim's 'journey', his lawyers job is to delay sentencing for as long as the law allows. I mean it's not like he's languishing in a cell somewhere,,,,,,yet. Ya know, we all probably have fantasized about offing someone at one time or another , but to actually hand over photo's, cash and gate codes to someone you believe kills people ,,,, there's some dark spot inside his head that will never be healed or rehabilitated. Keep up the good work Eva, I enjoy your columns.

Lambesis' lead attorney, Warwick, was not in court on Friday May 2, but instead he sent a junior attorney as stand-in. Warwick was not able to get any concessions in the plea deal agreement, so it will be interesting to see what happens at sentencing. Thank you for your kind words. Here is a photo featuring Lambesis' tats at his first court appearance.

"As he dies waiting" might be an apt description. If he pulls an almost-certain multi-year state prison sentence, he better enjoy his relative freedom now. I doubt that the hard-core cons in whatever lockup he gets will be impressed by his hideous tats, or his buffed-up bod. In fact, just the opposite will be the case. That photo doesn't make him look like a good candidate for hard time at all. I'm always amused at the fact that he now appears in court with a white dress shirt, covered from neck to wrist to waist, hiding all those rasty-looking tats he has. I'm still wondering how all those bucks he made in his "musical" career will benefit him if he pulls some years in Calipatria or Chino or even Donovan. Poor Timmy!

Lambesis is an adenoidal moron who deserves at least 20 years in prison. But he'll probably get 5 years at most. He better keep a tube of Vaseline in his back pocket. He's going to need it where he's going. Bubba is waiting for him.