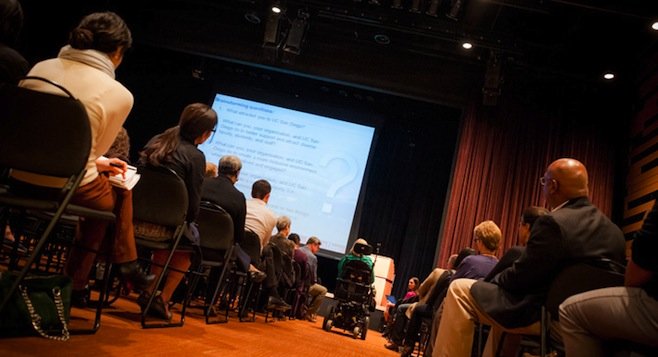 The results are in and UCSD has received a generally passing grade in the University of California's recently released "Campus Climate Assessment Project" survey, though there are some downsides.

"The purpose of the survey was to gather a wide variety of data related to institutional climate, inclusion, and work-life issues so that the University is better informed about the living and working environments for students, faculty, staff, post-doctoral scholars, and trainees at the ten UC campuses," says an introduction to the study, conducted by the consulting firm of Rankin & Associates.

On the other hand, "23% of respondents believed that they had personally experienced exclusionary, intimidating, offensive and/or hostile conduct; 8% of respondents indicated that the conduct interfered with their ability to work or learn."

The report defines a "genderqueer" as "a person whose gender identity is neither man nor woman, is between or beyond genders, or is some combination of genders. This identity is usually related to or in reaction to the social construction of gender, gender stereotypes and the gender binary system.

“Here, those who chose to self-identify as genderqueer have been reported separately in order to reveal the presence of a relatively new campus identity that might otherwise have been overlooked."

Two percent of those answering the survey "believed they had experienced unwanted sexual contact while at UC San Diego within the last five years," though there were some variations there as well.

"Higher percentages of Undergraduate Students (4%) experienced unwanted sexual contact in the past five years as compared to Graduate/Professional Students (1%), Staff (2%), Faculty (1%), or Post-Docs/Trainees (1%).

Participation in the poll wasn't the highest.

"Response rates by constituent group varied: 19% for Undergraduate Students, 24% for Graduate/Professional Students, 30% for Post-Docs, 11% for Trainees, 21% for Union Staff, 23% for Faculty, and 44% for Non-Union staff."

According to the university, the survey set taxpayers back $602,200.

Add $602,200 for this study to the salary of the head of the office of diversity (which was established under former Chancellor MaryAnne Fox and whose hire split in less than a year) and you're talking serious money. Also, did pollsters Rankin & Associates think up that category called "genderqueer?"