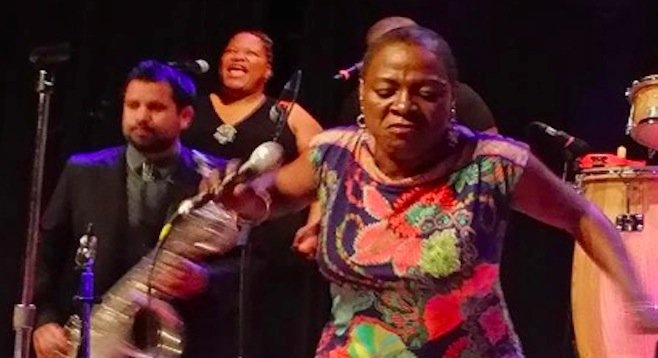 What is the name of this funk-bound train? Sharon Jones & the Dap Kings!

A soul revue of eight airtight musicians travels through groovy songs showcasing two strutting backup singers. If the crowd is already gyrating with joy and anticipation when the lead singer arrives, her hands held high and earrings dancing, what is the name of this funk-bound train? Sharon Jones & the Dap Kings!

Led by bassist Bosco Mann, the group (including three horns and a percussionist), dapperly dressed in suits and ties, maintain a hypnotic side to side sway as they rock vintage instruments on tracks such as “I Learned the Hard Way,” “100 Days…100 Nights,” and “Retreat.”

Touring in support of their latest album, Give the People What They Want, the band does exactly that, transporting the audience to the golden age of soul, the late 1960s/early 1970s. The tour guide for the journey is the vivacious Jones.

A force of nature, Jones’s soaring vocals, shining eyes, and fancy footwork are infectious. Recognizing a kindred spirit, Jones pulls a woman onstage from the audience…then, two men. Soon, the band is buried among the gravitational mass of audience members shaking their moneymakers.

The stage cleared, Jones blows the roof off the house with a “Whoa, whoa, whoa!” rich rendition of “This Land Is Your Land.”

Attendees are now slightly younger and happier than the general population. There is something right with a world that has Sharon Jones & the Dap Kings performing in it.