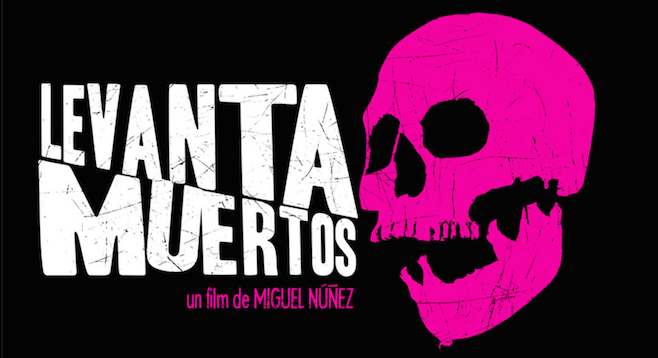 Friday was a grand night for moviegoing at this year’s San Diego Latino Film Festival, where I had the pleasure of introducing a couple of pictures on behalf of the San Diego Film Critics Society.

Program director Glenn Heath and I had agreed that I would be there on the 21st to talk about Heli and Levantamuertos long before he learned that three members of the latter film’s creative team would be in attendance. Instead of an audience Q&A after the screening, I would now lead a post-show discussion with director Miguel Nuñez, editor Lorraine Kirsten, and sound designer Ed Callahan.

SDLFF founder and director Ethan Van Thillo and I engaged in some spirited lobby talk before the show, and he stressed the importance of having filmmakers and cast members in attendance. The good news is there was a healthy crowd for the 5 pm showing of Levantamuertos and Heli, which had screened twice before, was practically a sellout at 10 pm.

How many opportunities does one have in their lifetime to meet and question a filmmaker in person? From MoPA, to my years with the Cinema Society of San Diego, to any of the numerous festival screenings I’ve both attended and presided over, the same scenario plays out time and again. The crowd is informed prior to the show that a member of the cast and/or crew will be on hand after the movie to field questions from the audience. The second the closing credits begin to roll and the houselights come up, invariably 30% of those in attendance head for the exit.

Does the babysitter charge by the second? Is the meter on the cab running? Did every member of your family suddenly go into surgery? What is so scary important in your life that you can’t devote an extra 15 minutes listening to a guest speaker? Too shy to speak up? Then sit back and listen. If you didn’t like the movie, all the more reason to stick around and throw a few questions their way. Nothing rude, but then again what could possibly be more discourteous than for a filmmaker to watch people file out of a theater just seconds before s/he is set to speak? Why not just come right out and tell them their baby is ugly?

The audience fall-off after Levantamuertos screened was pleasingly light. Many who stayed threw out enough questions to kept Nuñez and his crew talking for 20 minutes. Here is a hunk of the lively discussion courtesy of official SDLFF videopgrapher, Cameron Quevedo.