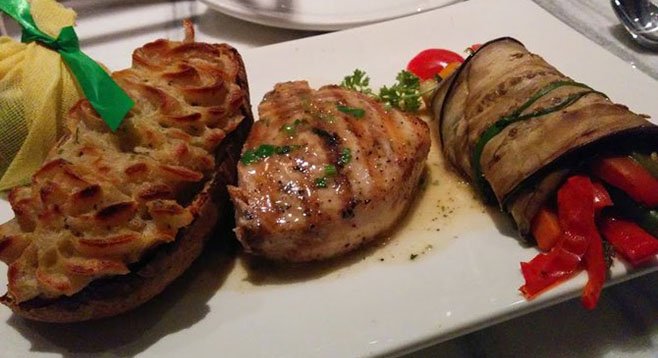 Coming from the group behind the Karina’s Mexican Seafood restaurants, Eastlake’s new Savoie Eatery is...interesting, to say the least. Savoie has prime real estate in the Otay Ranch Town Center mall, which puts it in the company of places like PF Changs and the Cheesecake Factory. But Savoie clearly aspires to borderline-fine-dining status. At first glance, it’s a striking restaurant with fantastic design. In an effort to capture a sense of French high society, the designers draped the place in topiary and animal effigies, as if to recreate an image of the Sun King’s menagerie at the height of its grandeur. It’s airy and fanciful, but also elegant and proper. Nobody pulled any punches in the decor — consider the print in the men’s bathroom, which depicts laughing hyenas drawn inexorably towards a human heart on a stake! How cool is that? And this is in a restaurant where the hostesses are wearing, no fooling, tutus.

Savoie’s design deserves commendation for being both chic and intellectual, but also for departing mainstream mid-century revivalism and exploring a new look. 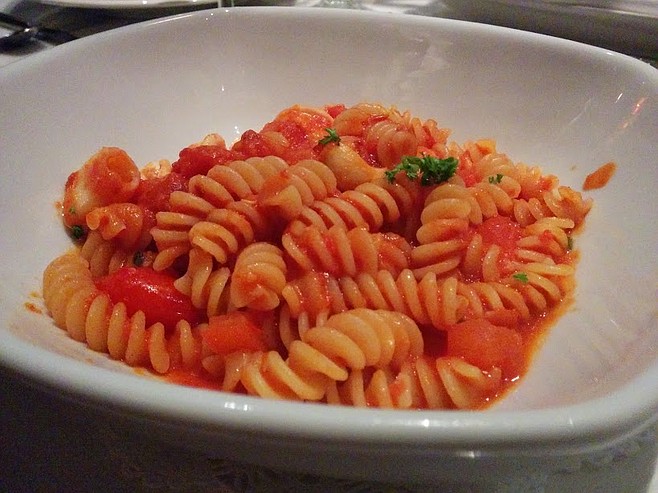 Fusili fra'diavolo is unsophisticated in its spiciness, and the calamari has a certain gumminess, but the fresh tomato sauce shows that some basic ideas are intact.

Make no mistake: this is one of the most stunning and unique designs we’ve seen in the county recently. The fact that it’s in a suburban mall boggles the mind.

Billed as French-Italian, Savoie Eatery’s cuisine swings for the fence in an effort at elegance. The result is a wicked and unexpected culinary line drive that bounces hard off the outfield wall, not quite the intended home run, but the fans would be cheering and the opposing team scrambling.

Steak Diane...Sole a l’Admiral (summoned from a long forgotten Anthony’s menu?)…cote de boeuf (aka “tomahawk steak”) for two...Maine lobster everywhere...this is a menu that drags all kinds of sumptuous culinary relics and standbys out of the basement, dusts them off, and foists them on the Chula Vista mall crowd in a wonderful and unprecedented attempt to make Eastlake a dining destination.

The haute cuisine aspirations run more than skin deep, but not at all to the bone. The absence of any real wine list sours the experience some. Little, irksome details (mediocre bread in the breadbasket and underwhelming side dishes for the entrees) undermine the kitchen’s efforts. The basic idea is there, but it’s lacking in the essential fineness that would elevate a restaurant to great heights, not to mention justify the expense. Savoie Eatery’s main dishes break often into that $30-plus, sometimes $40-plus, range that makes diners start looking for excellence, and Savoie’s standard side, a sachet of limp vegetables, doesn’t cut it.

It sounds crazy at first, but it looks for all the world like Savoie Eatery wants to be a sort of Pamplemousse Grille for the South Bay. That’s a serious aspiration, and not an unworthy goal. To see the restaurant triumph in this would be an absolute delight. It certainly looks the part. Imagine if metro San Diegans were driving thirty minutes south — to a mall — for a fine dining experience. As it stands now, Savoie Eatery isn’t quite splendid enough to send “Northerners” down to Eastlake, but it could get there with a little sophistication in the kitchen.

Now, wouldn’t that be something?