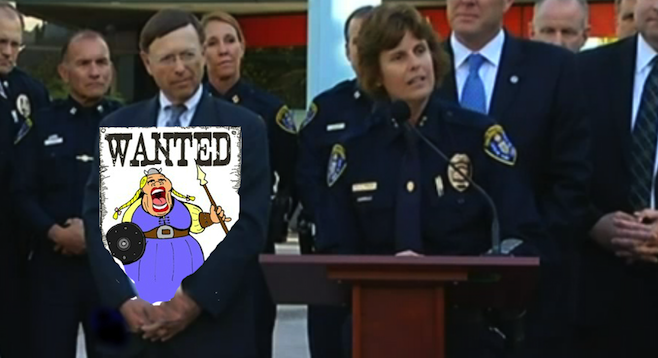 "Operas don't just disappear," says San Diego Opera Director Ian Campbell, speaking of his company's imminent closure at season's end. "Especially not 50-year institutions operating near the top of the field. Somebody has to get rid of them. And in this case, somebody did."

Campbell is speaking of The Fat Lady, a legendary — some say mythical — criminal mastermind said to have the power to end opera companies simply by raising her voice.

Critics have been quick to dismiss Campbell, pointing instead to dropped donations during the recent economic difficulties, the rising popularity of hip-hoperas such as R. Kelly's Trapped in the Closet, and sharp advances in couch-comfort technology. But at least some people think Campbell is right. "The Fat Lady has dogged opera since the days of Bugs Bunny," says Betty Nordlinger, chairwoman of the San Diego chapter of CRONE [Crazy Rich Opera Nonagenarian Enthusiasts] . Our organization has spent millions in its efforts to silence her. But it looks like she's struck again. And now it's over." 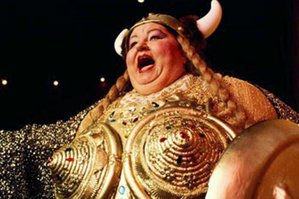 Is this her? I snapped this pic at the 30th and University bus stop in North Park last night, where she was singing for her supper (in other words, $45). I offered her 5 bucks to STOP singing; no luck.

30th and University? Look at this Hipster Songstress. "I perform in this really obscure musical form that hails from 16th-century Italy. You've probably never heard of it."

FYI, there really WAS a classic fat-lady-singing who played a sorceress in the most recent SD Opera production of "A Masked Ball" and she was the mezzo onstage tonight at the beautiful single performance of Verdi's "Requiem" at the Civic Theater. Also FYI, Irwin and Joan Jacobs were front and center in the audience. I did not see Papa Doug or Conrad Prebys, but then I don't really know what they look like in person. We can only hope they were present. Finally, the marquee was changed from what you claimed it said in an earlier post today.

Thanks much for the update!

I imagine Papa Doug looks the same "in person" as he looks in the society pages of the U-T.