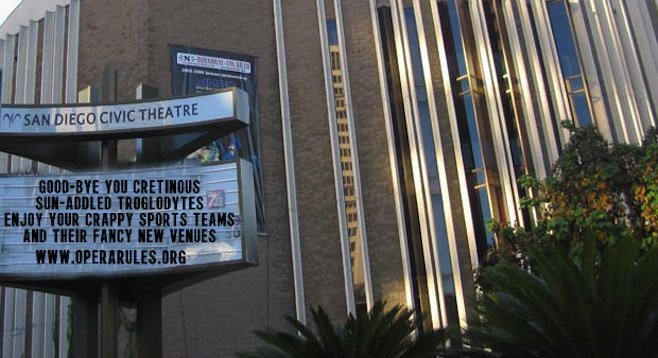 "Cincinnati has an opera, people. Cincinnati."

Just one day after San Diego Opera announced that it would be ceasing operations at the close of its season, a visibly shaken Mayor Faulconer called a special public session of the City Council to discuss possible ways to save the seemingly doomed institution.

"Between costumers, musicians, singers, set designers, makeup artists, hairstylists, publicists, theater technicians, acting coaches, and who knows what else, the San Diego Opera employs or supports some 1,000, um, 'creative types,'" said Faulconer. "Without the opera, where will these people go? I'll tell you where: San Francisco. Or New York. Or, God help us, Los Angeles. I do not want to be the mayor who presided over the great Hillcrest diaspora. We cannot consider ourselves a world-class city without a thriving, how do I put this, 'enclave for alternative lifestyles.' "

As ever, KPBS has the news you can use.

But while several members of the Council nodded gravely in agreement, no ideas for saving the opera were forthcoming. Finally, Faulconer himself bleated, "Look, I know what you're all thinking. We need to be putting every dime we can spare toward the new stadium for the Chargers. But I don't know — maybe we could find some way to incorporate the opera company into the new stadium deal or something. You know, add a stage at one end, let 'em put on a show once in a while. Between Junior Seau's suicide, Norv Turner's bizarre longevity, and the whole 'seduced by Los Angeles' scenario, there's got to be something you could build a tragedy around. And hey — what about all the freaks who come here in costumes for Comic-Con? You know they'd be able to do something funny with that. Didn't they make a hit musical out of Spider-Man on Broadway? Well, there you go."

Stop it, my stomach hurts from laughing!!!

Walter - how old are you?

The usual drivel. But the graphic is excellent.

Drivel? Uh, no. It's superb, witty and very funny satirical commentary. Some readers just don't get it, apparently.

Why thank you, KLo. "The usual drivel" was this close to being the column's name, but we wanted more local flavor.

Almost factual is quite in line with what passes for news around here.

It is easy, too easy, to mistake Mencken's work for real news, and real news for satire. Many, many Reader headlines, especially, seem too weird to be true, and are true. And some of the headlines on almost factual news look perfectly reasonable. San Diego is the city where it is impossible to separate reality from satire.

That's the god's truth. Even now I click on a headline thinking it may be a real story only to find it is a Mencken thing. He is very funny, but the state of this town is exactly what Visduh describes...and Matt Potter...and Don Bauder...and Dorian Hargrove...and Dave Rice. But aside from the venal politics, we've got great performing arts to take our minds off our troubles. Well, minus the Opera now, but still....

Mencken's pieces always have this written statement above them: "SD on the QT: Almost Factual News" So how can anyone be fooled, and think it is a real story? It baffles me.

You may be on to something here.

The City gives enough money to the wealthy social events. If the Opera can not support itself it should not exist.

All civilized nations support the arts. Notice I said civilized.

The sky is not falling, just because a moldy opera company bites the dust. The arts are doing just fine in this nation.

You are dead wrong, dwbat: it is/was not a moldy opera company. Only troglodytes and philistines (look 'em up) say things like this. Going to the San Diego Opera is/was a great experience.

That's your opinion, and the name-calling is inappropriate. And I don't need to "look 'em up" as I'm a lifelong professional writer (and former spelling bee champ at my middle school).

And if the citizens aren't "Civilized," then the elites will force them to be by subsidizing it with tax money,

Late News Update: Mayor Faulconer made an exciting and surprising announcement this morning regarding Operagate. A famous "opera" company has agreed to open a West Coast venue in San Diego, and will present regular shows beginning in 2015. This San Diego Civic signage mockup was shown at his press conference. 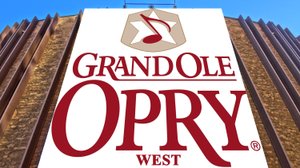 Nail, meet Mr. Hammerhead. Easy to identify the source of the guano, because it's consistently green, as in the color of envy. Laughing out loud, Klo.

The first show of this promising 2015 season has been announced. It will star Reba McEntire, reprising her Broadway role of Annie Oakley in Irving Berlin's "Annie Get Your Gun." Surf to www.GrandOleOpryWestinSanDiego.com for tickets!