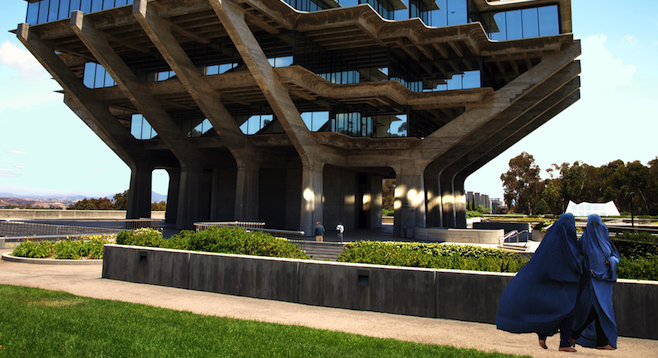 Newly formed UCSD Muslim fraternity Alpha Lambda Mu came under administrative scrutiny this week after reports surfaced that the organization was incorporating controversial practices sometimes associated with Islam into its pledge initiations. First, pledges were photographed during Rush Week wearing burqas, high-coverage garments typically associated with Muslim women. Then came accusations that pledges who were seen in public without their burqas were subjected to Shame Bagging — buried in the sand up to their necks at La Jolla Shores and pelted with bean bags. (SD on the QT has obtained an unverified photograph that appears to show one such victim.) Finally, one student claimed that, at the ALM final initiation ceremony, he was subjected to a mock "forced conversion." "They held a wooden scimitar to my throat" the student reportedly claimed, "and made me say, 'There is only one God, and Muhammed is his prophet, and Alpha Lambda Mu is his fraternity!' I mean, I'm already a Muslim — that's why I joined — but it was still weird." 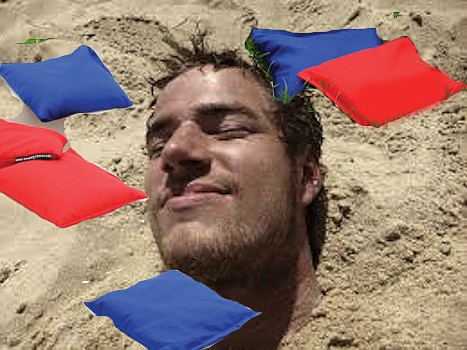 UCSD Dean of Student Hijinks Derek Clowning was quick to downplay the accusations. "Everybody needs to calm down and remember that these aren't anti-Western Islamic extremists we're dealing with here. These are privileged American teenagers at a major secular university. In two years, they'll regard their childhood faith as a joke, just like our Christian and Jewish students. I say, let them have their fun. If there's one thing we learned from the [2010 ghetto-themed party] Compton Cookout put on by Pi Kappa Alpha, it's that fraternities are very good at relieving the tension surrounding hot-button issues through good old-fashioned humor. Alpha Lamba Nu is just carrying on that proud tradition."

Nevertheless, UCSD's Get Out, Deists — a student-led atheist organization — has called for the fraternity to be shut down pending a full administrative investigation. "GOD knows this is offensive and evil," said GOD spokesperson Cat Herding. "They can call it a joke, but a joke only works if it contains a shard of truth. And even one shard of religious hate dragged across the face of our university is one shard too many. God is not great!" she concluded, echoing the title of Christopher Hitchens's anti-religion bestseller.

"This is typical anti-Muslim prejudice," responded ALM spokesman Jeff Akbar. "Nobody complains when [Christian fraternity] Geda Ona Crosa subjects their pledges to the Heretickle," a quasi-torturous ordeal which required pledges to "formally recant" obscure heresies regarding the nature of Christ and the Atonement while tied to a stake and tickled by GOC members. "Not to mention the gross privacy violations of the Sinquisition," wherein pledges' Facebook pages are made fully public for a full day on the Friday before initiation. "They didn't even get that upset when [Jewish fraternity] Chozen Ova Goyim made that kid be the Scrapegoat." (Akbar was referring to an isolated 2010 incident when a COG pledge was made to wear fake horns and get on all fours clad only in his underwear, after which he was loaded with the fraternity's "weighty blood sins" in the form of a cooler full of Maneshevitz and forced to crawl through the "desert" of the campus's cactus-heavy xeriscape installation.) But we make one little effort to pay tribute to our cultural background in a lighthearted way, and suddenly, everyone's crying Sharia this and Extremist that."

Reached for comment, UCSD Greek Life Student Adviser Bud "Buttchugger" Biederbecke said simply, "Whatever, dude." Asked to clarify, he added, "Religious frats are as unnatural and restrictive as monogamy. All that post-pagan crap doesn't begin to do justice to true Greek Bacchanalian Bro-code. 'We serve no God but Pan, because Pan is the Man.' Last year, Zeta Zeta Zeta made the pledges grease up their butts and hold a dozen marshmallows between their cheeks while they ran naked along the UCSD sculpture walk. Then they had to go retrace their steps and eat anything they'd dropped along the way. Cool story, bro — no?"

Thanks! And to answer your kind email, no, no relation to Bill Maher. If I were, I'd be bugging him to put me on his show.