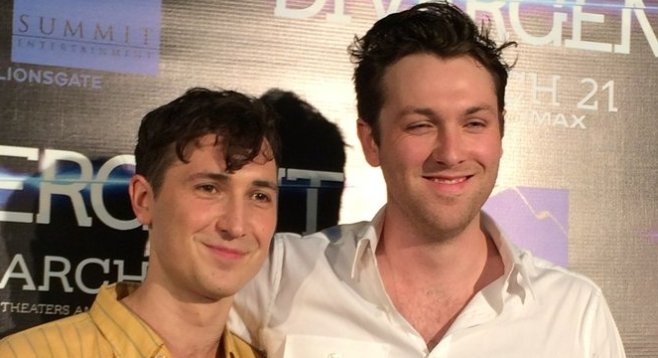 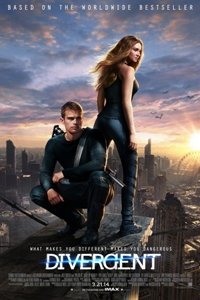 In Divergent (opening this week), Shailene Woodley plays Tris, a young woman living in a post-war dystopian city that has been divided into five factions: Erudite, Dauntless, Abnegation, Amity, and Candor. At 16, all children choose to join a particular faction — usually, but not always, the faction of their birth. (They aren’t allowed a backup choice.) Though born into Abnegation, Tris chooses Dauntless — the warriors. There, she meets and befriends several other imports, including Will (Ben Lloyd-Hughes) and Al (Christian Madsen).

Matthew Lickona: When popular books like Divergent get made into movies, there’s always this pressure of fan expectation. Do you pay any attention to how the fanbase wants you to be? 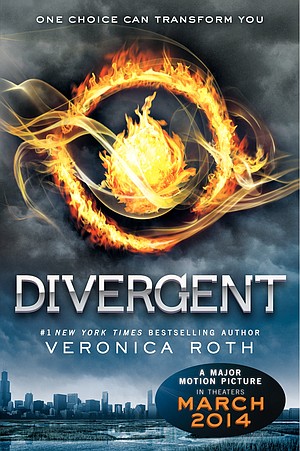 If you don't read the book, how will you know if they cast the movie right?

Ben Lloyd-Hughes: Fortunately, I’m not on Facebook or Twitter or anything, so on the whole, I’ve stayed away from it.

Christian Madsen: It’s best to stay away. Someone told me that someone wrote on a blog that they didn’t think Four (Theo James) would look like he did. I was sort of like, "That’s what life is. Things are not going to be how you think they are." I think we were the best fit, but maybe I’m alone on that. 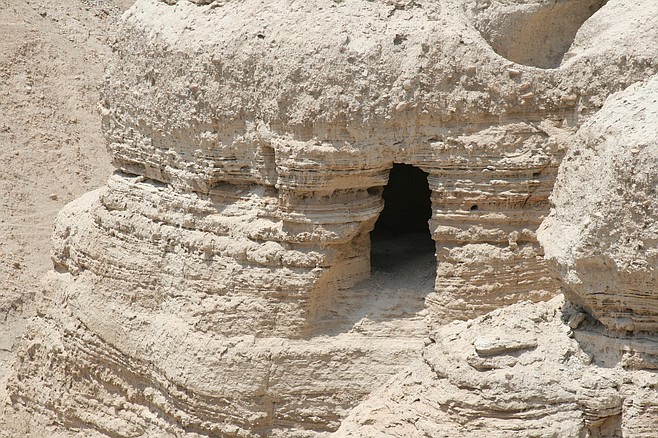 BLH: Sometimes when I read books, I imagine the characters, and even if the film could never get it perfect, you slowly adapt once the film comes out. Especially if there’s more than one. You get used to it. When you think of Harry Potter now, you might think of those actors, whereas you might once have thought of something completely different.

ML: When you think of Sherlock Holmes, whom do you picture? 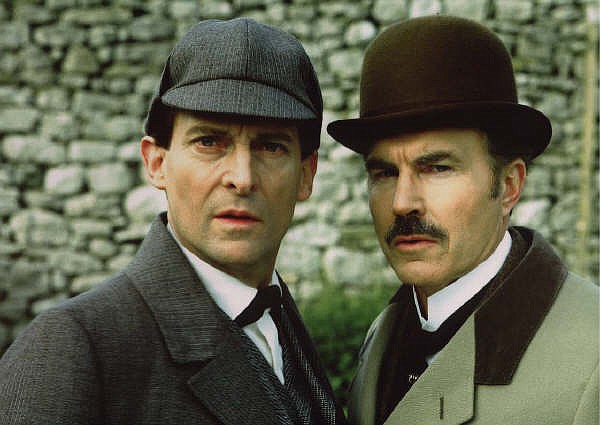 BLH: I’m a big Benedict Cumberbatch fan. I think it’s the essence of a character that’s important. When the film comes out, hopefully, people will realize that we got cast because we brought an aspect of the characters’ personality alive.

CM: We tried to stay as true to the characters as possible. Generally, we’re doing it for the people that read the books, the fans.

ML: So what was the essence of your character?

BLH: Will is kind of the know-it-all in the group. He comes from Erudite, so he’s very smart and matter of fact. He likes statistics, and he has a great sense of humor. As an actor, it was great to play a great person, a nice guy. If you look and sound like me and you’re British, you can sometimes end up playing a lot of bad guys. I loved playing someone generous and warm. I just tried, every day on set, to think of Will radiating honesty and purity of heart.

ML: How did you get that across?

BLH: There were a lot of group scenes where we had just a line here or there, or where we had to react to big moments, life or death situations. There was a lot of storytelling where you had to convey huge stakes without lines. It was all in the face and eyes, and that was a challenge.

ML: So Ben took warmth and purity of heart for Will. What about Al?

CM: I relate to Al so much, and you might think, "That must make him easier to play." But it’s much tougher than you think. In acting classes, they say, "The toughest thing is to be yourself." You have to go into these dark places a little bit. I think of Al as being shy and quiet, but coming from Candor, he’s as honest as possible. I think his greatest trait is that he’s protective.

ML: Then how do you explain his great transgression?

CM: I think when you’re in love, there’s a lot of passion. He was confused. I think he probably didn’t have the greatest childhood, and that he ended up going into Dauntless to prove to his parents that he could be a man. I just think he was very confused. I think if he’d had more time with Tris, it would have been different. I’ve been Al, in high school. I’ve chased a girl that didn’t like me.

ML: What are your favorite dystopian-future movies? 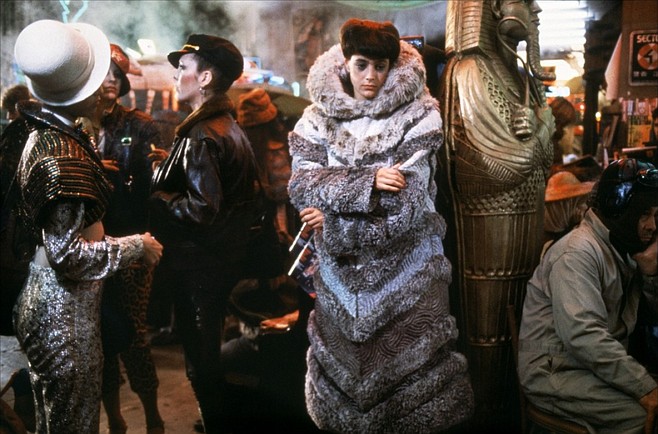 BLH: Blade Runner has got to be up there. Massive hit film for me. I’m a huge Ridley Scott Fan.

CM: Did you see The Counselor?

BLH: Yeah, didn’t love it. But also, Terry Gilliam — all his films have this amazing world that they set up. 12 Monkeys... 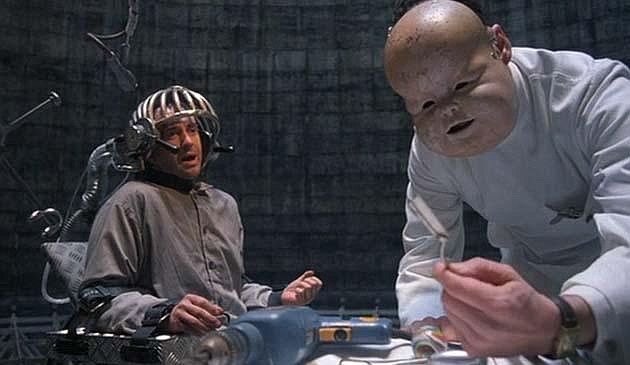 Brazil: "That mask maybe isn't as cheerful as you think it is."

CM: Brazil. Brazil was such a good movie. Probably The Matrix for me as a favorite. Just the whole trilogy is incredible. But Brazil is a great movie. It almost takes this plotless journey, in a way. And the documentary is incredible for Blade Runner. It’s something like three hours.

BLH: Have you seen the one for 12 Monkeys? That’s one of the best backstage [stories].

ML: Why do you think this story was a hit? When you do a dystopia movie, you’re usually trying to work on a particular fear — isolate it, make it clear. What’s going on with this one?

BLH: From a personal point of view, what drew me to it when I read the script was that I was hooked into a world where young people have a lot of pressure on them. They have to make this decision — which faction to try to join. All over the world, this generation is having to do that as young people. There’s a lot more pressure on them to make decisions quickly, in terms of what we want to do and where we want to go with our lives and what kind of people we want to be. Sometimes it’s great, and sometimes there’s a lot of stuff to deal with. But we make all these decisions at a young age, either small or big, that dictate our lives.

ML: If you make the wrong call and wind up factionless, that’s pretty much the worst thing possible.

BLH: Yes, the worst thing in the world. It’s about ‘Who do you want to be?’ I was drawn to that. In this reality, we can say one thing and be another. But in that world, there’s no hiding. You are judged, 24/7, on your actions. There’s actually something quite exciting about that, but also something dangerous. 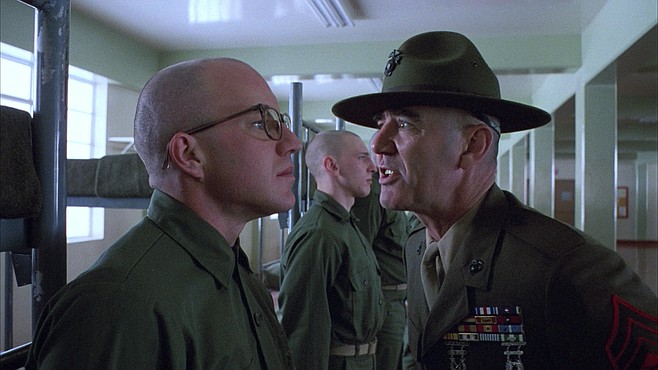 "You can't be anything you want to be."

CM: When I read the script, it was kind of like, “Well, I’ve had changes growing up.” In middle school, you might go through a Goth phase or whatever. You keep finding these things until you find yourself. That’s what I related to. In these stories, you can’t be anything you want to be. They see right through it. I joined this boxing gym a couple of months ago, and you think it’s just about hitting the pads and being loud. But they strip you down, and you realize how technical boxing is, and that you’re not that good. And it’s not about being loud and hitting the pads. You have so much to learn, and you have to start from ground zero.