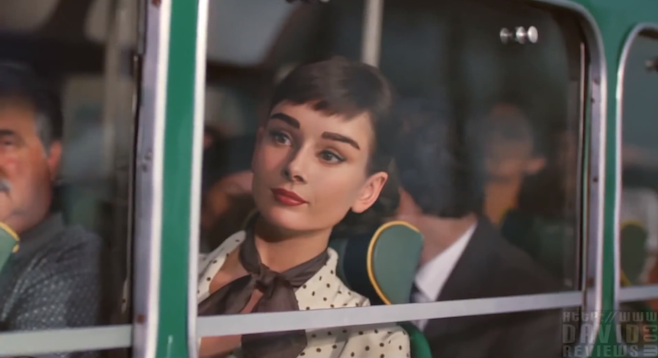 What would you do for a Klondike Bar? Preferably choke on one before ever again biting into a Dovebar.

M&M/Mars, the company that acquired the Dove line in 1986, has decided the best way to raise awareness of their overpriced line of candy bars and glorified ice cream sandwiches is by pulling Audrey Hepburn from the grave and using her computer-generated likeness as their corporate spokesperson.

Where's Sean Ferrer when you need him? Probably cashing the residual checks.

Just because the company is named Mars doesn't mean their ad campaign should be headed up by a team of martians. Iconic though she is, the queen of gamine makes for a terrible confection vendor. Off-screen, Ms. Hepburn quietly, and without the benefit of an E.T. camera crew following her every charitable move for future broadcast, traveled the globe as an ambassador for U.N.I.C.E.F. It's doubtful that she planned to cure world hunger one candy bar at a time.

Even The Three Stooges were pulled out of permanent retirement to unload cellphones.

After what Mars did to Audrey, I'd rather drink Dove than eat it.

No one's taking writing credit for this one? Hmmmmmmmm...

Seems the makers of Mars forgot the Astaire Celebrity Image Protection Act which was passed after the estate of Fred sued to protect his image. The law's in place - enforce it!

The Astaire spot was in 1997. Here's The Three Stooges for Master Card from the early 2000s, John Wayne hawking Coors Beer from 1990, and the one that started it all: the granddaddy. Hershey's from 1987.

1987 Hershey's Commercial (One of the All-Time Greats)