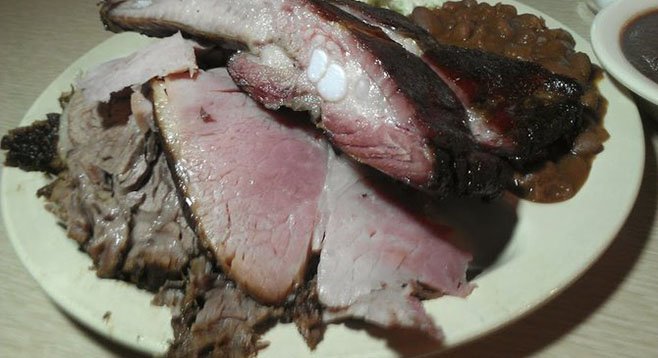 Well, this is it. All Things BBQ is (for now) at an end, and the results painstakingly analyzed. It was never meant purely as a contest, more as an extended lecture on one of the richest culinary traditions of the United States. Hopefully, a few people learned a thing or two about what it means to ‘cue!

That said, every survey has its winners and losers. For anyone lacking the time or inclination to read the whole story, here are the basic facts.

The accumulation of many advantages sets Wrangler on a pedestal above the rest. The handbuilt barbecue pit produces delicious meats and perfumes the air with woodsmoke. The side dishes and sauces have no major flaws. The prices are cheap. The decades-old decor charms, in its way. It’s a family business. All that adds up, and the Wrangler is truth in barbecue. 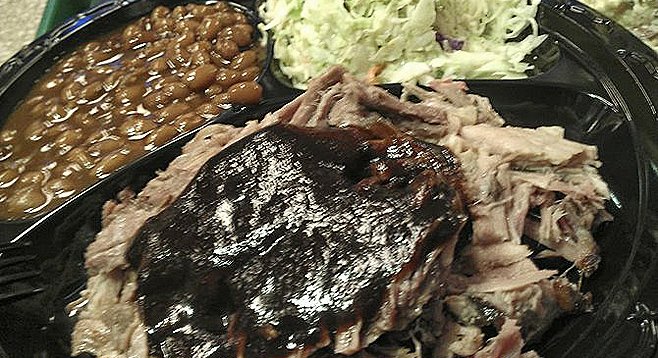 Chopped and sauced roast at the BBQ House in OB.

They may not have the big, smoky barbecue pit, but BBQ House’s cooks manage to turn out some pretty succulent meat. It doesn’t hurt that it’s a neighborhood institution, and that the phenomenal “Sloppy Joe” sandwich is less than three bucks.

The ‘cue is good, but not great, certainly not worth driving more than five or ten minutes for, but the spicy/smoky/tangy chipotle sauce that Bubba’s puts up is far and away the tastiest sauce around. Of every sauce tasted for the sake of All Things BBQ, only Bubba’s gets everything right. It’s not orthodox, but it respects the harmonious balance of acid, spice, and sugar that makes truly great barbecue sauce/

The flavor of smoke penetrates all the way to the bone. The meat is tender, but still toothsome. The thick bark that coats the outside of each rib contains huge amounts of flavor, and the meat below is still succulent. Wrangler’s ribs approach perfection. 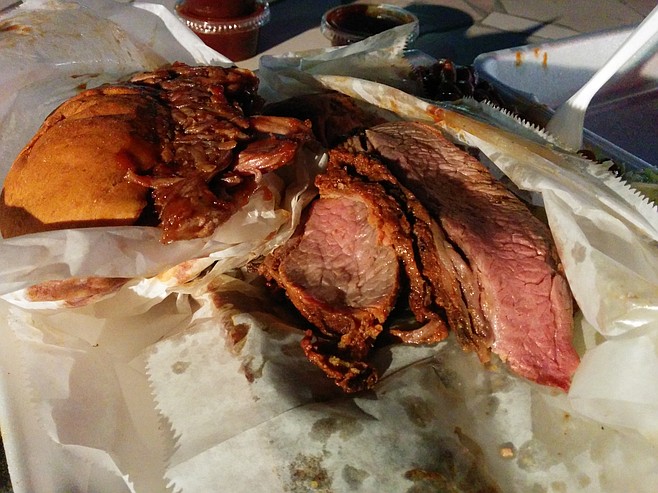 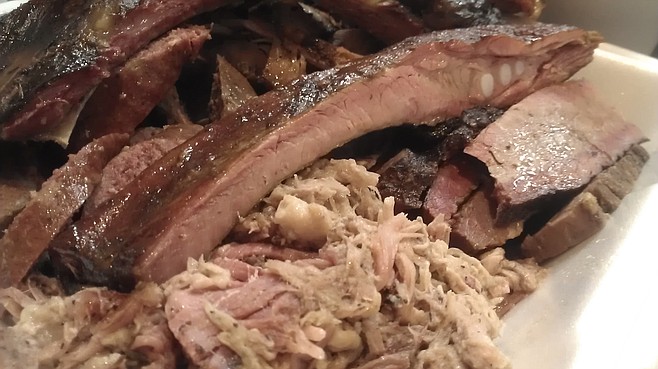 There’s a lot of tasty pulled pork in All Things BBQ, but Coops has a secret, and that secret is excellent cole slaw. Spiked with cider vinegar, and made without mayonnaise, the combination of pulled pork and phenomenal slaw gives Coop's an edge.

Some days, you want to be pampered..wined and dined..catered to by an expert team of servers. Other days, you just want to sit outside, underneath a gentle evening sky, and enjoy a little bit of the country life. Barbecue is rustic stuff, the kind of cooking that’s best enjoyed without pretense, and Valley Farm serves ‘cue at its most humble.

While I cannot offer any rebuttal to the choices, I'd really, really appreciate some effort to head north of I-8 and evaluate some of the BBQ joints in the northern reaches of the county. Gosh, up here we have many cities and miles and miles of freeways and strip centers with operations proclaiming their BBQ. Then there's the fact that about half of the population of the county is north of that aforementioned freeway. So why are we ignored? The spending bucks are up here, believe it or not, and we appreciate good food.

I'm making an effort to include more North Country restaurants in Feast...I really am. Promise. I had plans to get up to Jimmy's Brick Pit, but it closed. So did Fairmont Diner...both of them were north of the Ocho, but, now they are no mas!

Great article. Though, really, you could've delayed this until Saturday! Makes it tough on us catholics to read about this quality meat and then realize it's Friday during lent. DOH!!!!!!

P.S. Coops is the best in San Diego. :) Head further north to Compton and hit Bludsoe's for the other best option in SoCal.

I actually get to Carson/Dominguez/Compton sometimes for various reasons. Usually go to R&R Soul Food, but will try Bludsoe's next time. Thanks.