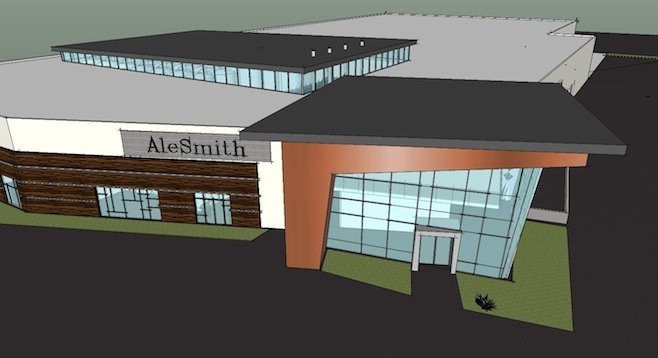 AleSmith movin’ on up

It was an evening nearly half-a-year ago. I was sharing time, beer, and conversation with Peter Zien, owner and brewmaster at AleSmith Brewing Company (9368 Cabot Drive, Miramar). Over the years, this kindly San Diego beer scene stalwart has let me in on a great many things concerning what is widely regarded as one of our county’s (and country’s) best breweries. But on this day, he shared the biggest news I’ve been privy to…then asked me to keep it under my hat until he was ready. It’s really tough to stay silent when you’ve seen floor plans for a much-needed, much-larger brewing and tasting room facility, but somehow I was able to stay mostly mum. Today, I can finally let readers in on some exciting details as Zien and company are ready to share their next step with the world.

AleSmith recently signed an 11-year lease on a 105,600 square foot building at 9990 Empire Street, just north of its current 20,000 square foot facility. Scheduled to open in January of next year, the building will undergo a number of renovations throughout the remainder of 2014. Those will be completed by Marcatects and Urban Contracting. Once complete, the facility will house a brewery, tasting room, and gift shop. The latter will sell assorted merchandise that goes beyond the offerings of most local breweries, in that other artisanal products such as AleSmith Speedway Stout Mustard will be included. Also unique will be the fact that visitors will be able to conduct self-guided tours thanks to a second-story mezzanine overlooking the brewery. There will also be a food truck area and light food service.

All of the brewing equipment at the facility will be new, including an 80-barrel brewhouse, cellar, and Krone’s bottling line. The new equipment will allow AleSmith to increase annual production from 15,000 barrels to 25,000 barrels in 2015, roughly 45,000 barrels in 2016, and eventually reach a maximum annual output of 150,000. The move facilitates a quintupling of square footage and a tenfold increase in the amount of beer the brewery can output. That increase will pave the way for several new beers as well as new packaging options including 12-ounce bottles set to debut in 2015. This is significant in that, despite being named the best brewery in America by various sources, AleSmith has been unable to supply craft beer fans with its beer. Upping production will allow the company’s current markets to receive much more of its product while also allowing AleSmith to venture into new areas. Zien estimates opening five new distribution areas alone in 2015.

Though a big and much anticipated step, this is far from the end of Zien’s personal journey. Though one of the world’s few BJCP (Beer Judge Certification Program)-certified Grand Master Beer Judges (Level One), and a greatly decorated home and professional brewer, he someday sees himself leaving day-to-day brewing operations to his staff to shift his primary attention to his other passions. He will continue to own AleSmith, as he has since taking it over from founder Skip Virgilio in 2002, but also has fervent interests in other artisanal pursuits such as cheese-making and baking. For years, he has been at work getting a second business, CheeseSmith, off the ground. It will come to life as a component of the new AleSmith facility, where samples of the product will be made available to tasting room visitors. Once he has brought that to fruition and reached his self-envisioned pinnacle of success in that area, he can easily see himself moving on to the business of flour and yeast. But that’s all in due time.

For now, Zien is extremely happy to be growing his business outside of its original location (which he hopes to sell as a turnkey operation). That space, though much smaller than AleSmith’s future home, has actually undergone two rounds of expansion, which included taking over spaces neighboring the original brewery and tasting room, and maxing out every square inch with brewing machinery, fermentation tanks, bottling equipment, barrels, tasting and administrative space. Having built-in room to grow will be a huge boon for Zien, and also allow him to hire on a projected 25 new employees to help with the wide array of work that will need to be done at the new spot. When asked the reasons for selecting his new digs, Zien cited a multitude: parking, a traffic light, the fact it is easy to find, and the desire to remain in Miramar. That community is home to a plentitude of breweries, but AleSmith was its first, so moving away was never an option.