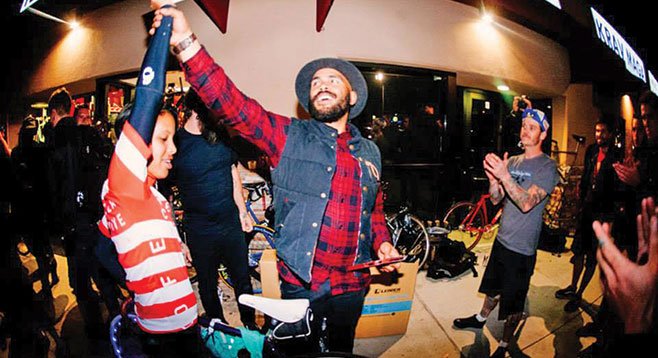 Fixie freaks do the alleycat thing

It’s Saturday night on El Cajon Boulevard. A mob of cyclists banters on the sidewalk, cheering and slapping high-fives as friends wheel across the finish line with endorphin-tinged grins. The race — organized by Lucas Evans of local bike punk crew the Cretins — is a fixed-gear alleycat with checkpoints ranging from downtown to Balboa Park to Hillcrest and back to North Park. It doesn’t matter what route you take, you just have to hit all five checkpoints — as fast as your legs will carry you. 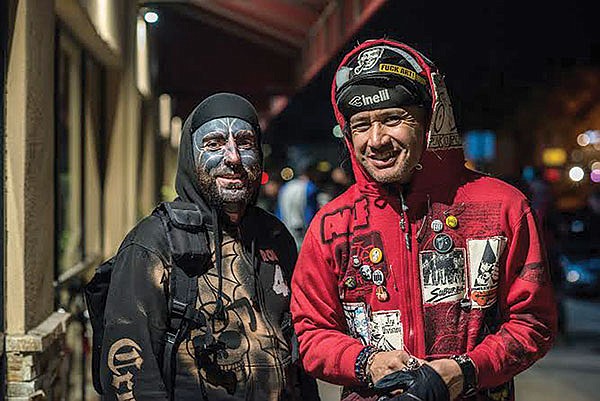 Now, cycle enthusiasts of every inclination are converging over the ceremonial offerings of pizza and beer to celebrate the opening of Retrogression (2545 El Cajon Boulevard, suite C), San Diego’s lone dedicated fixed-gear shop.

“We’ve always loved the city and the scene,” says Dave Scrod, who runs the place with his wife Angie. “There’s obviously a really strong fixed-gear scene here, as you can see tonight. Everyone is really tight-knit.”

Last November, Angie and Dave uprooted their shop of two years in Beverly, Massachusetts, and moved west to San Diego, where, tonight, they cheers beers with familiar names from internet sales.

“I ran into at least 12 dudes tonight who have bought stuff from us online,” says Dave, who started the business out of their small Beverly apartment four years ago.

“It’s rad because I’m meeting them now in San Diego. It just kind of makes sense. San Diego didn’t really have a shop that was dedicated to fixed-gear riders.” 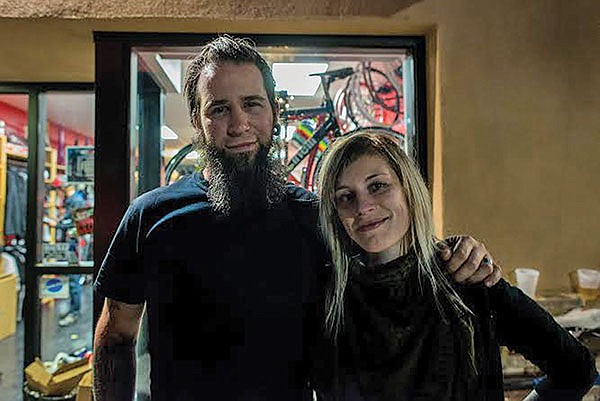 Cretin cruiser Gerardo Yapiz, a graphic designer and artist aka Acamonchi, sees the arrival of Retrogression as a sign of growth for America’s Finest (bicycle weather) City.

“The bike community has been escalating,” says Yapiz, a row of Leader frames (manufactured in Southeast SD) lining the shelf behind him.

“Within a year, there’s been four new bike shops in this area. That’s a great thing. You got North Park bikes. You got Brooklyn Bikes. You got this one. You got Jesse’s Bikes with her stand at the farmers’ market. There’s an alleycat race, on average, like, two or three times a month. The Aware Wolfs, the Cretins, Las Calaveras, we all ride together. It’s like a big family.”

A placard by the bathroom reads, “Employees must carve Slayer into forearms before returning to work,” and Dave explains: “I grew up racing BMX and skateboarding and listening to punk rock. I was just a little dirt rat in the ’80s. To me, it’s just an extension of that. I never set out to be an athlete. I hated sports growing up. I don’t want to be Lance Armstrong. I’m just a dude who rides a bike, and I have a good fucking time riding a bike.”

Beaming behind a proper Boston beard, he adds, “I’m a 40-year-old guy. It’s not some fad I’m getting into and I’m gonna grow up and next year I’ll be on roller blades or something like that. I just do what I do. And that’s why fixed-gear appeals to me. It’s anything goes. Do your own thing. You can see it tonight. Everyone’s cool. We’re listening to loud music and drinking beer like we’ve known each other forever. It’s like punk or hardcore shows — that feeling, like, this is my family.”