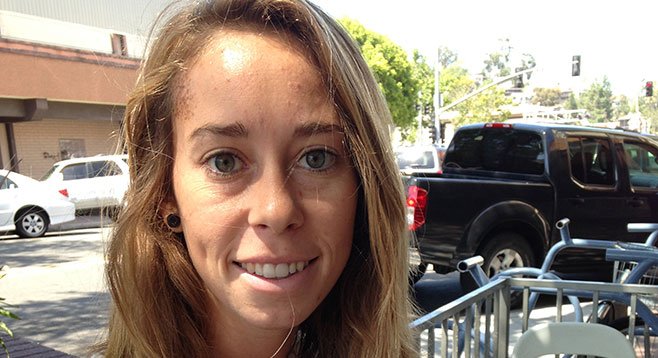 What are you reading right now?

Mountains Beyond Mountains: the Quest of Dr. Paul Farmer, a Man Who Would Cure the World, by Tracy Kidder. I’m reading it for a cross-cultural perspectives class at school — I go to SDSU. I’m not sure if it’s based on a true story, but I think it is. It’s about a young man who’s a doctor through Harvard, and he also has a bachelor’s degree in anthropology. He goes to Haiti, to some of the poorest people there, and he starts doing field work to learn about what the people really need in that region. He’s white and he stands out, but he’s incredibly intelligent. He picks up their language and basically builds a hospital that serves the people who live there. It’s the only hospital that actually functions the way it needs to. He makes a really big difference. That’s the point I’m at so far.

The lead character, because of how he is depicted. He’s young, but he’s selfless in everything he does. He doesn’t think about his material needs; he just basically gives his income, which is over $100,000, to his work and lives in a little box house.

Tell me about the writing style.

It’s very descriptive and visual. It kind of bounces around from the past to the present and back to the past again, intertwining all that’s happened in his life and how it relates to the current moment.

Anything else you’re reading?

I recently finished The Teachings of Don Juan: A Yaqui Way of Knowledge, by Carlos Castaneda. It’s about the Native American healer Don Juan, who uses peyote and mescaline and stuff to transcend normal human thought. It’s pretty philosophical, but it’s based on a true story as well. I like things that are more realistic.

Tell me about a scene.

It’s about a young man in college who goes to be the apprentice to Don Juan; he’s the one who writes the book. Don Juan prepares him to eventually use peyote, and the first experience he has with it is incredibly intense. So he writes it from the perspective of what he can remember after this ten-hour experience. They talk about mastering certain powers — it’s all about men; women are not involved — and the point is to become as wise and as capable as you can. He has to find the peyote plant in the desert, but he can’t go seek it out; it has to pop up in his path. It’s like the peyote is choosing him.

What book was most life-changing for you?

I read Ishmael, by Daniel Quinn, in high school and it opened my eyes to the fabrication of our society. I did a big project on it my senior year. A young man discovers a gorilla living in an apartment that was leased to him, hidden from society. It has this way of explaining the world to the young man that makes him realize how we’ve created our entire world, from evolution on to current society. I started to be more thoughtful about the world after that, and there were people I was hanging out with that I no longer related to after I read the book.

I really like John Steinbeck. The way he wrote was so different from other books I’d read up to then. There was something so deep about The Grapes of Wrath; it represented so many different people and was so interconnected. Like the scene at the end when the nursing young woman ends up having to breastfeed an elderly woman because that’s the only way she’s going to live. I’ve read The Pearl, Cannery Row, and Of Mice and Men as well.