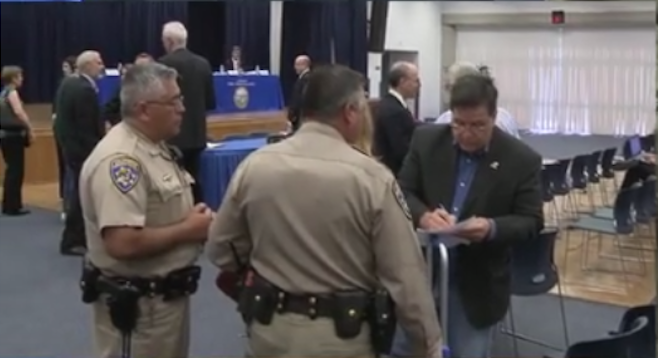 Mike Aguirre tells the audience at a June 16 public meeting of the California Public Utilities Commission in Costa Mesa why he opposes the so-called “settlement” that would force ratepayers to shell out $3.3 billion for mistakes of Southern California Edison management at San Onofre.

“People have been coming in for years. They know what they like.”
Next Article

International Smoke and a $29 lunch

Mike Aguirre tells the audience at a June 16 public meeting of the California Public Utilities Commission in Costa Mesa why he opposes the so-called “settlement” that would force ratepayers to shell out $3.3 billion for mistakes of Southern California Edison management at San Onofre.

How could this have remotely been considered a legal request?

eastlaker: There are a bunch of things that cannot be considered legal requests. The whole secret settlement giving utilities $3.3 billion for botching San Onofre is not legal. The searching of Aguirre before he spoke was not legal. Michael Peevey, former president of Southern California Edison, should recuse himself from a case in which his former company is getting such a huge windfall. Best, Don Bauder

Renel Axford: Why don't you ask eastlaker, "May I take you to lunch and then pick your pocket?" Best, Don Bauder

I'm calling my broker now. Intrepid attorney Mike Aguirre makes a strong case here for investment in SoCalEdison/SDGE which 1) gets fabulous returns for its shareholders by screwing ratepayers; 2) for colluding with the California Public Utilities Commission whose chairman is a former industry lobbyist; and 3) for secret payoffs to so-called watchdog agencies like Friends of the Earth, UCAN and TURN to guarantee their acquiescence in a settlement over the failure and closure of San Onofre Nuclear Power Station. (Nice video, Ace Hoffman.)

monaghan: You touched the important bases. Wall Street loves the CPUC because it rigs the system so state utilities get higher rates of return than utilities in other states. And, yes, self-professed public watchdogs like TURN and UCAN play ball with the CPUC and get fat intervenor fees, while those speaking for the ratepayers get nothing. (The CPUC keeps denying Aguirre any intervenor fees.)

Because Wall Street loves the CPUC, the stock of Sempra, parent of SDG&E, has soared above $104, even though it has a lower dividend yield (2.5%) than comparable utilities.

Question: Does Peevey still have stock in Edison International? Is it offshore? Best, Don Bauder

I'm calling my broker now. Intrepid attorney Mike Aguirre makes a strong case here for investment in SoCalEdison/SDGE which 1) gets fabulous returns for its shareholders by screwing ratepayers; 2) for colluding with the California Public Utilities Commission whose chairman is a former industry lobbyist; and 3) for secret payoffs to so-called watchdog agencies like Friends of the Earth, UCAN and TURN to guarantee their acquiescence in a settlement over the failure and closure of San Onofre Nuclear Power Station. (Nice video, Ace Hoffman.)

monaghan: Although somehow you said it twice, I agree a second time. Ace Hoffman did a very good job on that video. Best, Don Bauder

Don - I think it's "I picked your pocket, do you still want to pay for lunch?".

No, picked your pockets and I'm still gonna make you buy my breakfast, lunch and dinner as long as I want. By the way in legal disputes they can't steal the evidence you gathered to present your case, in this country.

shirleyberan: Yes, but the CPUC makes its own laws. Why do you think SDG&E and Edison consistently get away with having the highest electric rates in the nation? Best, Don Bauder

Because apathy and ignorance are prevalent and popular.

After the San Bruno fire, I contacted the CPUC Executive Director (Paul Clanon) by email, requesting a meeting.

Ten days later, the Highway Patrol showed up at my front door -- telling me that a CPUC Judge was worried that I was going to harm her.

I had no communication with the Judge in over three years. I think Mr. Peevey was involved in ordering the Judge to file a false police report.

I have recordings of two conversations with Clanon. When I asked Mr. Clanon if he was involved in sending the police to my house, he told me he didn't want to talk about it, and that he would look at some documents I sent to him (in order to determine if a utility lied to conceal problems in its infrastructure).

When I later talked to Mr. Clanon, he told me that nobody at the CPUC is authorized to determine if the Utility lied.

See the link to the recordings and other documents: www.AphoneNumberForThePresident.com, you may have to cut and paste.

Mike Knell; Nothing at the CPUC would surprise me. Best, Don Bauder

Didn't flag - what about Stephen King almost dying before he wrote his book on writing?

mikeknell - I didn't see what you said - sorry - thank you for your courage.

are the under the impression Mike does not have copies of the papers ?

Murphyjunk: Maybe nobody told the CPUC and the cops about computers. Best, Don Bauder

"The duties of the Public Advisor’s Office are mandated by Public Utilities Code Section 321, which states:

Gorgor: Yes, the Public Advisor's Office has a mandate of assisting people who want to testify before the commission. Apparently, having the cops shake down an intervenor is within that mandate. Only the CPUC would see it that way. Best, Don Bauder

With 3+ Billion (really more like about 5 billion dollars) at stake, everyone should ask every MS in California and all the BIG Networks why they are not covering this story which will affect everyone living in SoCal.

If true discovery is allowed then SCE will be found "at fault" since they have caused this fiscal disaster themselves and therefore all ratepayers SHOULD NOT BE REQUIRED TO PAY FOR ANY PART OF THIS DEBACLE and should receive a refund that reflects every cent paid since the replacement steam generator project was approved, instead of having to pay for SCE's design blunders.!

As of now, we have paid and/or are still paying about*:

*NOTE: This is only a partial listing and I believe it is on the LOW side...

Unless the MSM gets the word out, the CPUC will just keep doing what it has been doing, delaying, delaying and more delaying...

CaptD: I agree with you 100%: ratepayers should not be forced to pay for Edison's mismanagement and/or corruption. But if people don't raise hell, this kind of abuse will continue. You will see it in your utility bills. Best, Don Bauder

Illuminado Delgado: Yes, we are getting more like a Third World country by the day. The CPUC's abuse of someone sticking up for ratepayers' rights is an example. So are the vast disparities in the distribution of income and wealth. There are other examples. Both the Supreme Court and the Congress are exacerbating wealth and income inequality. Best, Don Bauder

Where does Peevey live? He does know California has a huge earthquake fault line, right? This thing is so disturbing. Reminds me of the car company bailouts except that was above ground BS, and not as precarious.

shirleyberan: I assume Peevey lives in the San Francisco area. San Franciscans are aware of the danger of earthquakes. Best, Don Bauder

Peevey lives in La Cañada Flintridge. That's where he lived for quite a whle. His wife represents the 25th, so obviously she must spend considerable time in Sac. That being the case, I'm sure they have a place that's convenient for both of them in the north when they are there. Or maybe they each have their own separate ones.

danfogel: Before I answered the question, I tried to find where Peevey lived. His wife was representing a state senate district in the L.A. area. But I figured that since the CPUC is based in San Francisco, he must have a place somewhere in that area. Best, Don Bauder

Don Bauder Even had I not already known it, it wasn't at all difficult to find where he lives.

danfogel: I am sure that if I had done more than a cursory search, I would have found it. But I don't have time to research every question that comes up on this blog. In any case, it seems to me he has to have some kind of residence in the San Francisco area, even if the L.A. County home is officially listed. Best, Don Bauder

Don Bauder, from my comment: " I'm sure they have a place that's convenient for both of them in the north when they are there. Or maybe they each have their own separate ones." As for the search,don't be so defensive. You said tried to find out where he lived before you answered. It just took me literally took less than a minute to look at his CPUC bio page, search "Micheal Peevey LaCanada Flintridge" and find this: http://www.sfgate.com/business/article/Why-Michael-Peevey-wants-to-stick-with-state-PUC-2477459.php

danfogel: Damn. One of the things I looked at was his CPUC bio. Incidentally, SFGate.com has done a very good job following Peevey and other utility-protectors on the CPUC. Best, Don Bauder

I agree completely. I read it almost every day

Note the charts of all the changes which led to the new steam generators failing shortly after being installed, which caused a radioactive leak which could have been much more dangerous.

So Peev and his family have their escape route ready, I bet east.

shirleyberan: It is my understanding that Peevey is a rabid Los Angeles Dodgers fan. I don't think he would want to go east. Best, Don Bauder

not sure about the fan part, but rabid for sure

Murphyjunk: I was told several years ago that when he was living full time in the L.A. area, Peevey went to virtually every Dodger game. Of course, as I have shown in past columns, he does take junkets paid for by utilities, so he may miss some games then. Also, he has to have some place to live in San Francisco, so he can't make so many games now. Best, Don Bauder