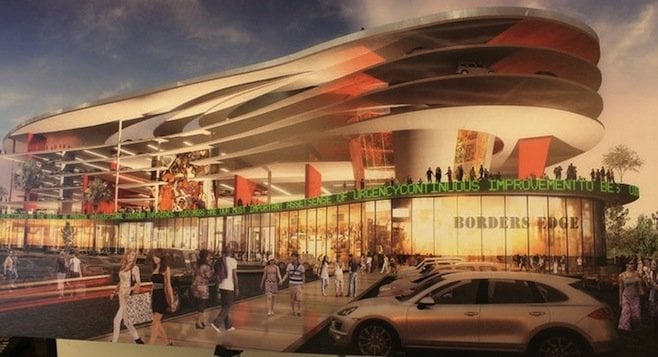 All about the parking spots

Border businessman offers a deal that may be hard to refuse

Simon Falic, chairman and chief operating officer of Duty Free Americas flew in from Miami on Monday, June 9, to unveil an architectural design for a multiuse structure at the San Ysidro Port of Entry.

The General Services Administration is planning a three-phase reconfiguration of the San Ysidro Port of Entry with the goal of assuring no more than 30-minute wait times at the border. The approximately $735 million project will include a significant realignment of southbound I-5. To properly connect the interstate to Mexico’s new El Chaparral border crossing, the I-5 will cut directly through what is now the 13 acres of land owned by Duty Free Americas.

When the General Services Administration takes the property through eminent domain, they will pay Duty Free Americas an estimated $30 to 50 million. Falic is proposing a land swap: he would like to keep approximately two of his acres and add one acre of what is currently owned by the General Services Administration. The three acres would be located next to the upcoming Virginia Avenue pedestrian crossing, where Falic would like to build a world-class facility.

“We want this to be an architectural landmark that reflects the values of the community,” Falic said.

“We want to partner with CBP where we can give them the high ground where the facility will offer them a heliport, an observation platform, and an area to put their cameras,” Falic said.

Jason Wells, executive director of the San Ysidro Chamber of Commerce, explained that the General Services Administration expansion will take away about 1000 parking spaces. That means when the approximately 50,000 daily pedestrians cross through Virginia Avenue into the U.S., there will be a lack of parking and kiss-and-ride areas, causing severe mobility conflicts.

Aguilar assured the audience, “In this rendering you are going to receive enhanced service to the community, a structure that will serve as a resource to the community, a structure that will fill the void of something that is critical to this part of the country, which is a parking gap that now exists and will continue to exist, and very critically will enhance the security of both communities as we move forward on this.”

Falic and his team have held several meetings with the General Services Administration in San Francisco and Washington DC. Negotiations continue.

Editor’s note: For over a year, the Reader’s Matt Potter has been tracking donations to San Diego politicians made by Simon Falic and his brothers Jerome and Leon.

A Florida company linked to the three Falic brothers kicked in $10,000 to get Democrat Bob Filner elected in 2012. Earlier the same year, the Falics may have pleased Republican then-mayor Jerry Sanders when Duty Free Americas foot most of the bill for a “Binational Summit” between border mayors.

Last July, Falic and his two brothers gave $2600 each to Juan Vargas. And, not partisan to a particular party or person when it comes to loading campaign war chests, the Falic brothers donated to rival Democrats David Alvarez and Nathan Fletcher when they were running for mayor last year.