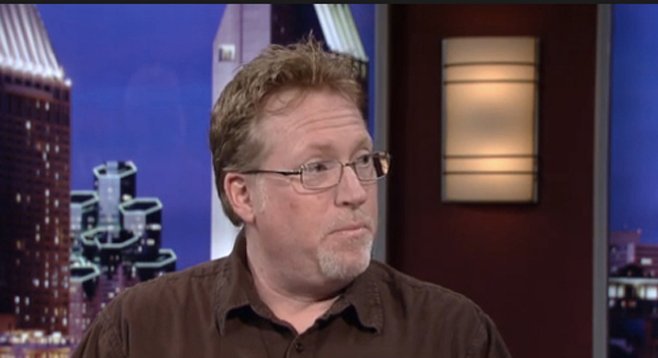 City attorney takes aim at lawyer and his non-profits

City attorney Jan Goldsmith and the attorneys working for him are doing their best to try and dig out the thorn in their side whose name is Cory Briggs.

Briggs is an environmental lawyer who has become well known in San Diego and nearby counties for filing multiple lawsuits against massive development projects, inadequate environmental review, and assessment districts. Voice of San Diego scribe Liam Dillon recently published a series of articles on Briggs.

Critics — and there are many in or around city hall — say Briggs is nothing more than an environmental ambulance-chaser, lining his pockets in the name of environmental advocacy. The criticism has now found its way to the city attorney's office.

In a May 30 filing in a case over illegal assessments, an investigator for Goldsmith accuses Briggs of embellishing the nonprofits he runs, making it appear as if there are others besides him behind the lawsuits.

In a declaration, investigator Sally Down attempts to debunk Briggs’s nonprofits and those who had provided depositions in the lawsuit challenging the legality of special tax districts.

Down then takes aim at one of Briggs’s other nonprofits, CREED-21.

"...according to the City Treasurers records, CREED-21 does not have a valid business license with the City at this time," said Down in her declaration. She then said that upon discovering this, Briggs filed the application after the fact. The address on the application: 1501 India Street #103, a Fed Ex Shipping Store located in Little Italy.

"CREED-21 has only submitted partial fees and has not yet filed their non-profit status documents. The partial fees submitted for CREED-21 were paid via a credit card belonging to Keri Taylor, a paralegal employed by the Briggs Law Corporation."

Down dug deeper, revealing that the "agent of service" for CREED-21 is "Karin Langwasser, who I am informed and believe is Cory Briggs' first cousin."

The information from Down is meant to detract from Briggs’s claims that he acts solely by direction of the nonprofits he represents.

The allegations have set the stage for a showdown in court. Days after the declaration was filed, Briggs fired back with a protective order against the city, asking that no more investigation take place and that no additional members be identified.

"The City ends its opposition with a rant that an organization that advocates for the open conduct of the people’s business and the public’s 'right to know' should not be able to shield the identity of its members. The argument is childish — the litigation equivalent of 'it’s just not fair!'"

The two sides will state their case at a hearing on Friday, June 6, in front of judge Ronald Prager.

As a member of the So Bay community, I APPRECIATE MR. BRIGGS's efforts - someone needs to look out for the little people. After all, as the lack of voter turn out indicates many taxpayers have lost faith in those we have historically voted into office. Once they win, they seem to forget they are there to serve not use.

Corey Briggs, a while back, stepped up to attempt to represent SUHSD against the company managing our Prop O dollars - John McCann and Ed Brand (and others on the Board) DECLINED?????

I don't think Goldsmith has the legal authority to order an investigation of a non-profit to identify the members. The IRS administers the non-profits and determines whether they are legit. We know that from recent Congressional investigations. If the IRS has granted non-profit status to these organizations, then their legal existence should be recognized in state courts. Goldsmith is an out of control two-bit Richard Nixon who is abusing his legal authority to order investigations for political reasons. This is the same lunatic who prosecuted the chalker.

Note: The chalker prosecution was actually done by deputy city attorney Paige Hazard (no longer with the City Attorney's office). Goldsmith has reportedly stated he shouldn't have allowed that prosecution, since it involved political speech by Jeff Olson, rather than graffiti/tagging by some punk. In that instance, Hazard got overzealous in her prosecutorial conduct.

Overzealous? Please post your address in North Park so that I may visit and express my political opinions on the sidewalk in front of your house on a daily basis. Don't worry, I'll use chalk. Thanks in advance.

I don't own/rent a house. Sidewalks are public, so chalk away on North Park sidewalks if you wish. And I don't give out my address to people I don't know, for obvious reasons.

P.S. Yes, she was overzealous! I guess you don't remember that jury nullification took place in that trial (resulting in acquittal) because the jury decided the prosecution was ridiculous and uncalled for, regardless of the City's graffiti laws.

dwbat, correct me if I am wrong, but jury nullification did not take place. Filner had done that in another case a weeks before the chalk case. The jury in Jeff Olson's case rejected the claim that writing in chalk should be considered vandalism.-dH

Right, Dorian. They rejected the law as written (which does include chalking), so I believe that amounts to jury nullification if I understand the term correctly (not being a lawyer). :-) Wikipedia says: "This may occur when members of the jury disagree with the law the defendant has been charged with breaking, or believe that the law should not be applied in that particular case." The jury knew he committed the misdemeanor (according to the evidence), but they had no intention of voting guilty for such a stupid law (in that instance).

That probably the case. I just never heard that during the trial, from the attorneys, the judge, nor the jury. That said, the wikipedia definition is exactly what happened. Thanks!-dH

Please include links to the legal documents.

According to City Council records, Deputy City Attorney Carmen A. Brock had requested the City Council to pay $500,000 to an outside law firm (Colantuono & Levin, P.C., in Nevada), for legal services re three lawsuits by Briggs' San Diegans for Open Government vs. the City. At a May 13 Council meeting, the agenda item did not pass and was instead "returned to staff."

FYI dwbat, Goldsmith's spokeperson told me that the City Attorney's Office did not request the money, that council did and they passed on it. -dH

Dorian, it seems confusing who actually requested the funding. In the document ( http://dockets.sandiego.gov/sirepub/cache/2/fdyslmrryvd51degplijlclv/66072406052014033608744.PDF ), it appears to say something else. A section states: "This action requests the City Council to approve the Agreement for Legal Services between the City of San Diego and Colantuono & Levin, P.C., in an amount not to exceed $500,000."

Yeah. I was a bit confused by it. I'm not sure why council and not the city attorney would request the money. Seems like a slap in the face to me but that's just my opinion. When asked, Goldsmith's spokesperson said that council requested it for a few "novel" lawsuits. Maybe there's a bit of rift there. Council prez Gloria's office wouldn't comment on it, saying it was a closed session item. So, here we are.-dH

City Attorney Jan Goldsmith is an attack dog for the establishment GOP and he earns his keep. We will be better off when he is termed out of office.

Goldsmith DID prosecute a chalker for exercising free speech rights in the form of sidewalk art work in front of a branch of Bank of America. Goldsmith humiliatingly lost the case; he damaged the credibility of the City Attorney's office; and he lost respect as a lawyer with good judgment. That Goldsmith is now trying to discredit environmental Don Quixote Cory Briggs is no surprise, as Goldsmith does the bidding of his corporate masters.

Like every good capitalist, Briggs makes money from his work. Who among us could argue with that? Unlike Goldsmith, Briggs is smart and will fight fire with legal fire. I hope Briggs is careful as well as combative and that his non-profit clients are authentic, or he risks burning down the house.

You didn't read what I posted above. Goldsmith's office prosecuted the "chalker" (Jeff Olson) but Goldsmith was not the actual prosecutor on the case. And the prosecution was strictly based on vandalism (graffiti), NOT free speech (even though that's what it really was).

In this instance, Briggs is suing to do away with the City's MADs and BIDs, but does not represent a client who pays the assessments. MADs and BIDs fund a lot of important things that the City cannot afford to fund itself. The fun, vibrant Little Italy, as we know it, would not exist without these districts. Every median in the City would paved with cement rather than landscaped. Most street fairs (e.g., Adam's Ave, La Jolla Art Walk, etc.) would not exist.

As you walk around the OB Street Fair and Chili Cookoff later this month, just bear in mind that it would not exist but for the funding mechanisms that Briggs is attempting extinguish AND that he is doing sue without representing a single person who pays the assessment.

this is entirely inaccurate. These are BIDs ( Business Improvement Districts), not MADs. The law, but not the city, distinguishes between the two.

No, Briggs HAS filed lawsuits against both MADs and BIDs. In the recent case of Golden Hill, it was a MAD, not a BID.

TedBo, The city does not follow the State MAD laws in the following ways:(1) formation regulations; (2) restrictions on the legal/allowable projects/expenditures.

You think that breaking the law is OK because you like the results. The ends justifying the means, based on your personal opinion, is not equivalent to the rule of law and democracy.

Briggs offered to recoup monies for SUHSD from past contractors. Dr.Brand stated this was not needed and sent him on his way. Cory was hired by SWC and recouped millions for them. Funny last weeks story in the UT I believe, and on the news Brand hired another firm to go after two contractors to recoup monies for SUHSD. I wonder what we would have saved by hiring Briggs.

Dr. Brand didn't accept Briggs' offer because there was nothing in it for Dr. Brand and his friends. That's my take on things.

Briggs is suing to do away with the City's MADs and BIDs, but does not represent a client who pays the assessments. MADs and BIDs fund a lot of important things that the City cannot afford to fund itself. The fun, vibrant Little Italy, as we know it, would not exist without these districts. Every median in the City would paved with cement rather than landscaped. Most street fairs (e.g., Adam's Ave, La Jolla Art Walk, etc.) would not exist.

As you walk around the OB Street Fair and Chili Cookoff later this month, just bear in mind that it would not exist but for the funding mechanisms that Briggs is attempting extinguish AND that he is doing sue without representing a single person who pays the assessment.

You are repeating yourself.

ted, I live in the county and I'm not familiar with Mads and Bids. Why did Cory sue them? Please educate me.

Are they illegal or just poorly managed?

To dwbat and tedbohannon - MADs and BIDs are legal under state law. The way the city spends the money it collects is illegal. That's the distinction.

Yes, he says in those particular instances the behavior of those folks running the MADs/BIDS is illegal.

Kind of like a Mello Roos district. Think I spelled that correctly.

Similar, but not the same as MADs and BIDs. A "Mello Roos" is a Community Facilities District (CFD), wherein that additional tax on property owners is used to pay the principal and interest on bonds (used for improvements).

Just another bottom feeder trying to loot the taxpayer. It's jackwagons like this that make most people hate anyone who identifies themselves as an "environmentalist".