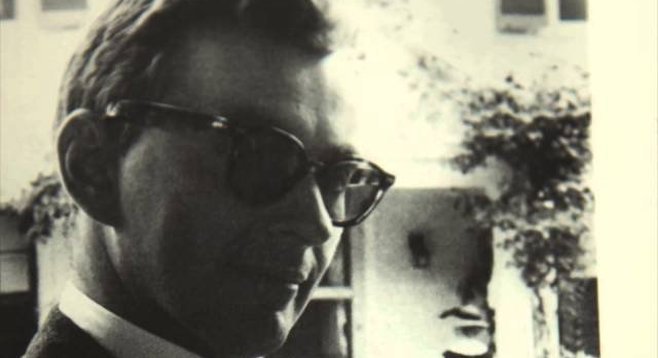 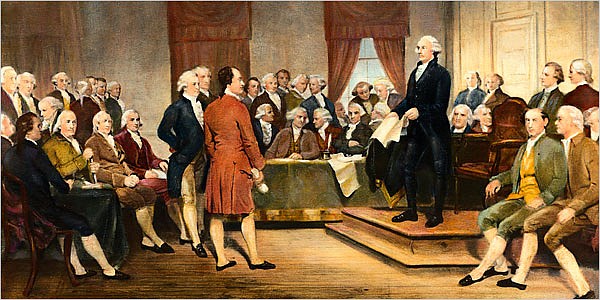 Gone are the days when public intellectuals roamed the television airwaves. (Gone, for many, are the television airwaves.) They may have been partisan, but they were not merely pundits. They classed up the joint, offering a soupçon of perspective informed by broad experience and even maybe a little learning. Gore Vidal was one such fellow, the kind of guy willing to slag on the founding fathers for their aristocratic airs, to lump the New York Times in with corporate America, and to lament that we could have been like Greece but wound up like Rome.

The media landscape at the time

Matthew Lickona: The film had a whiff of “passion project” about it, so I wanted to start by asking, “Why make this movie?”

Nicholas Wrathall: I guess I just felt like he was a voice that was going to disappear pretty soon [Vidal died in 2012] and someone that we’re all going to miss greatly. I actually started paying really close attention to Gore again after 9/11, when he was speaking out against the Bush administration’s rush into war and being sort of a voice of reason in the media landscape at that time. And that was what motivated me to start rereading a lot of his older essays and novels. Everything I read made me think, This is a timeless voice that we’ve got to get out to a new generation, and we need to remind everyone that does know him of what an important figure he was. 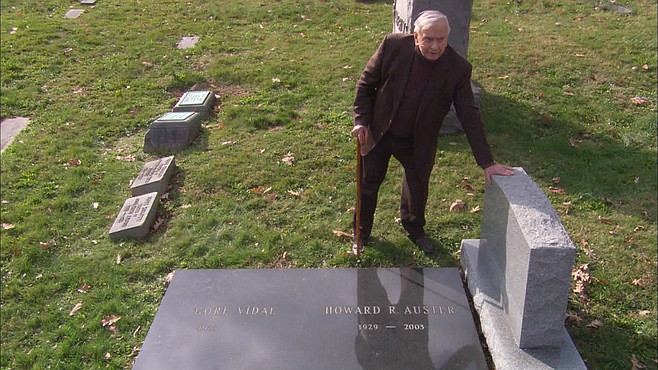 Anyone would get moody visiting his own grave.

NW: I was very fortunate in that I have been friends with his nephew for a long time, and he helped facilitate. You know, it was always tricky; Gore was a moody person. But he slowly came ’round to the idea. 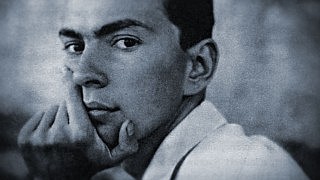 The child really is the father of the man.

ML: The film is a balancing act — a sort of biographical portrait of Gore and then also an account of his interaction with the American political world. The title made me think it was going to be even more political than it was, and then suddenly, we were learning about his childhood...

NW: Yeah, I was always very focused on the politics, and that is what I wanted the film to be essentially about. But I felt like it would be a disservice not to do a biographical sketch as well. His childhood and his personal history informed his politics, and it really helps you understand why you need to listen to this person. Because he really did have that insider’s view of the aristocracy that he was criticizing. 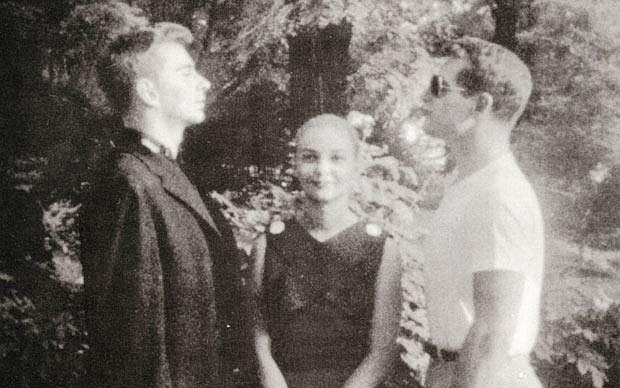 ML: What did he love about America?

NW: I think there were many things. The thing he disliked was the [wasted] potential. And he didn’t like the focus on foreign policy — imperialism and expansion. The American Empire idea. What he did love was the literary scene, and the art scene that he grew up in, and the Hollywood scene that he worked in as a young man. That, he thoroughly enjoyed. And I think he enjoyed the freedom of expression that he gained in this society. 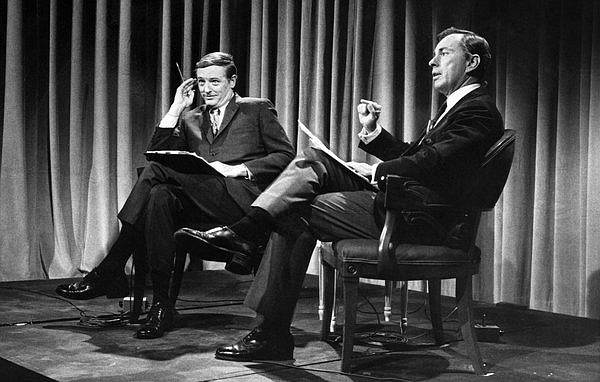 The Buckley debates really are something. Thank you, YouTube.

Also, I think he [loved] the potential that people had here to have these conversations, conversations that he wanted to be a part of. I think he found that very refreshing and important. He worked in the media very effectively — apart from being an author and a writer of essays and novels and plays, he also worked as a sort of pubic intellectual very effectively. Debating with William F. Buckley, being a commentator on various talk shows in the ’70s and ’80s. And I think the fact that he was able to hold that position — even though he was criticizing America, which I think he saw as his role — the fact that that was available as part of the media landscape, I think he relished that. 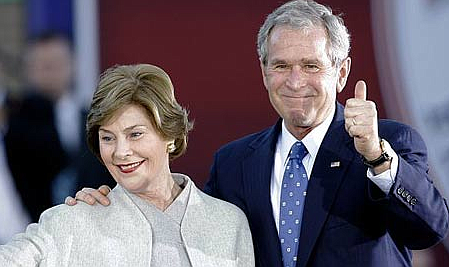 Gore Vidal: not a fan

ML: The journalist Robert Scheer says that in some ways he did some of his most important work in the latter years, post 9/11.

NW: I wouldn’t say it’s his most important work. Some people would say his novels were his most important work. But that was what he was doing when I met him, and that’s the era we’re living in now. So it’s very timely, and I think a lot of people felt that under Bush, we were really reaching a critical point with these wars in the Middle East, and the media was sort of on board with everything, and not enough people were criticizing them. So I think it’s a valid point. 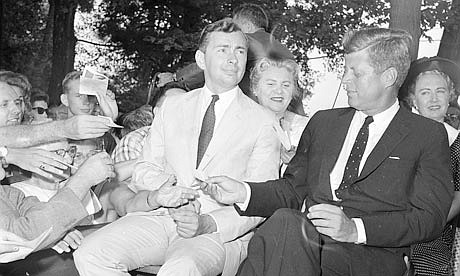 Just hangin' with Kennedy. No biggie.

ML: If he regarded the system as broken, why did he run for office?

NW: I think the first time, he was quite young, and I think he’d always been groomed for office, growing up in the shadow of his grandfather, who was a senator. And I don’t think he was as radical at that time. He was still developing his ideas, so he really ran very seriously. He was involved with the Kennedys and saw, as he says in the film, the opportunity to make a difference. I think both he and JFK were idealistic in that sense. And I think the second time, he was definitely more cynical. When he ran against Jerry Brown in California, it was really just to draw attention to very specific issues and to talk about economic disparity and the corporate control of the U.S. I don’t think he was seriously running to win office that time. 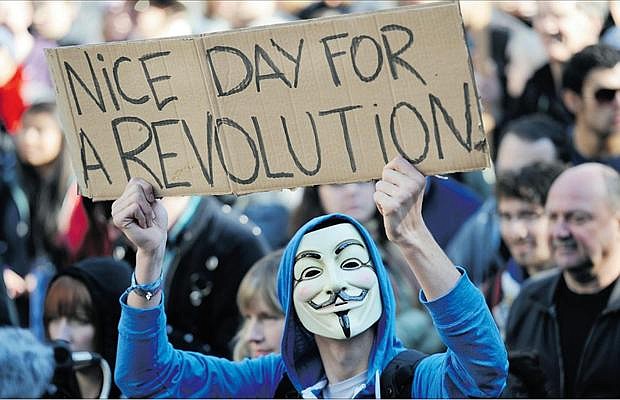 Oh, you say that every day.

ML: He speaks with admiration of the social upheaval of the ’60s and ’70s. What didn’t happen? He said to William F. Buckley, “If you don’t start sharing it, they’re going to come and take it.” Why didn’t they?

NW: I couldn’t put words in his mouth. I would have to say that I think he felt that the interests of the ruling class were able to sort of clamp down and bring the situation back into their favor and away from the interests of the radicals at the time. I think Gore just saw that big business interests were really at the heart of American politics and that people were answering to that. Those discussions he had around that time with Buckley — he mentions that 5 percent of the country has 20 percent of the wealth. I mean, wealth has just accelerated upwards ever since, and he was dismayed and very angry with that. He was actually a supporter of the Occupy movement, which he saw as a continuation of that idea, and he was glad to see young people out in the streets again. 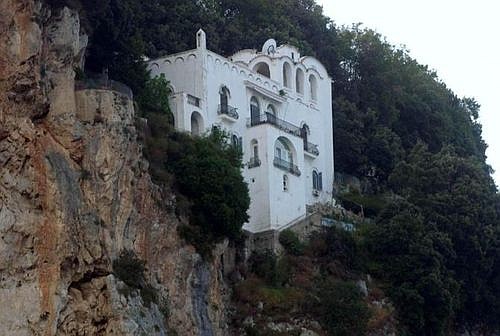 A lovely nest from which to hurl one's rotten eggs.

ML: What if someone said, “Look, I get your pretty idea about living in Italy and considering America from a distance and getting a unique perspective. But at that point, aren’t you sacrificing some of your stake? Sitting there 3000 miles away, lobbing shots across the water as opposed to being on our soil and in the thick of it?”

NW: Perhaps that’s a valid criticism, but he was back and forth a lot. The work he was doing was about the U.S., and he was on the phone with people here all the time, receiving information from the States. His focus was on America. He chose to live there in Italy. It’s a fair criticism to say that he should have been here battling it out, but he was a writer; he didn’t have to be here on a daily basis. 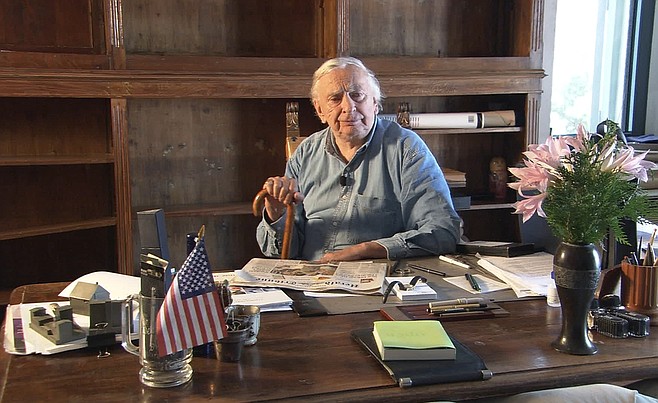 ML: A person sometimes shakes his head and thinks, What does any of this criticism matter? Does it really change anything?

NW: Well, that’s why I made the film, too. I feel like it’s a bit of a call to arms for people, for young people to discover Gore Vidal and keep the ideas alive and keep aware of where the country is. Does anything ever change, swing back in the other direction? Or does it keep going in the same direction: of wealth into fewer hands and corporate interests at heart and who knows what else? It’s hard to say. Good things happen, too. But Gore was quite cynical at the end of his life and would probably feel like, Was there hope? He did see hope in the Occupy movement, people getting out and really fighting for their rights.