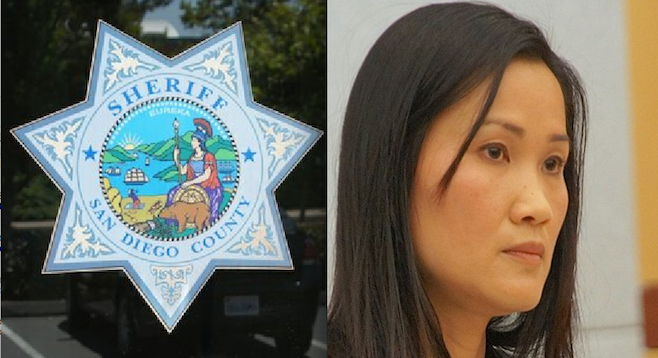 Investigators claim they were able to connect a repeat felon to a string of burglaries in San Diego County through fingerprints and DNA he left behind.

Thirty-one-year-old Roberto Lazaro Dimas pleads not guilty to eight first-degree burglaries. He is charged with ten felonies so far; prosecutor Teresa Pham has been adding new counts as the investigation continues.

The first burglary is alleged to have taken place in May 2013. The intruder of a home in Vista reportedly left behind a pair of gloves. DNA from those gloves was matched to Dimas, according to a report by sheriff’s detective Brendan Cook.

In June 2013, a burglar who entered a home in Fallbrook through a bathroom window left behind a plastic water bottle; DNA matched Dimas, according to the detective.

On August 11, 2013, a San Marcos home was burgled. The intruder entered through an unlocked back door; near that door, officers recovered a cigarette butt with DNA matched to Dimas, Cook stated.

Two days later, a thief took cash and jewelry worth more than $5000 from a home in Escondido. A Snapple beverage bottle that was left behind was swabbed for DNA and matched Dimas, according to the detective.

The next day, August 14, a burglar entered a home in Encinitas through an unlocked bedroom window and took jewelry and cash valued at $15,000. Fingerprints left on the jewelry box were matched to Dimas, Cook reported.

On August 26, jewelry valued at $70,000 was taken from a home in Fallbrook. Investigators believe the burglar entered the home through a window, and fingerprints lifted from that window matched Dimas’s, the detective stated.

On October 30, deputies recovered property stolen from numerous burglaries in San Diego and Orange counties at a home in Valley Center. An informant has connected Dimas to some of that recovered loot, according to Cook.

The following month, Dimas was taken into custody. His last reported address was in the 200 block of Third Avenue in Escondido.

It is alleged that Dimas has served prison time for three previous cases, in 2009, 2010, and 2011; those crimes were listed as vehicle thefts and burglary.

Dimas is currently held in lieu of $315,000 bail and is due in San Diego’s North County Superior Courthouse on February 11.