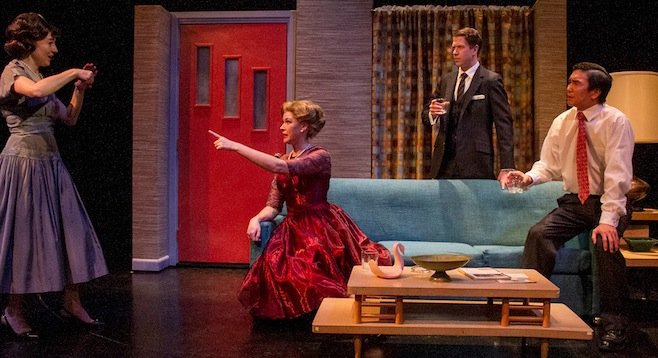 There’s good news about Cygnet’s show: Amanda Sitton is back on a stage. She took time off — a decade, it seemed — for maternity leave. She’s in tip-top shape as Jenna, a social-mediated NYC-ite in 2011; and Ellen, an eerie amalgam of June Cleaver, Margaret Anderson (of “Father Knows Best”), and Harriet Nelson, mother of Rickey, in 1955.

In the language of Jordan Harrison’s comedy drama, Maple & Vine, Ellen’s an ardent “spokesman” for life in 1955. She’d give anything to make her façade — beaming eyes and gleaming, Ipana-brushed teeth — the real thing.

Instead, as the play takes its time to reveal, she and husband Dean have two-sided, Victorian veneers: not quite Dorian Gray, but a gap between obsessively buffed images and the actuality they can’t repress. 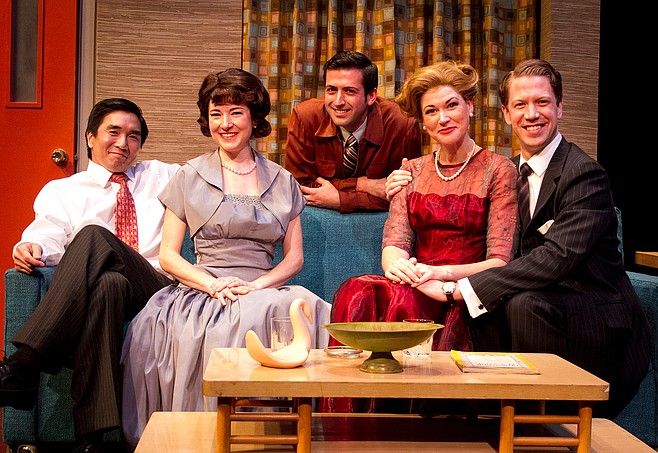 Maple & Vine creates a deliberate conundrum based on the age-old question: if you could live in any other historical period, which would you choose and why?

Hobnob with Shakespeare in Renaissance England (the bubonic plague ever at your door)? Strive for sainthood with Brother Francis and Sister Claire in 13th century Assisi (amid genocidal city states)? Hang out with a French King Louis’ ˆ either quinze or catorze (and Paris a cesspool of sewage issues)?

Or, say Jenna and Dean, how about the Fifties, when life was slow, they contend, and oh so mellow — if you don’t count racism, claustrophobic conformity, and cigarettes smoked during 10,000 calorie meals?

Dean and Jenna founded the Society of Dynamic Obsolescence. Though we never learn how it’s funded, they built a gated community somewhere in the Midwest. The place is so huge it has a Mason/Dixon line (the West available next year). Everything inside is 1955: rotary phones, steak and martini lunches, rigid gender barriers. The ideal, along with fleeing the 21st century, is “authenticity.”

From afar, Katha and husband Ryu pretty much have it all in 2011. She’s a book editor, he a plastic surgeon. A miscarriage, months ago, made Katha’s life a living hell. She finds that today’s emphasis on EVERYTHING RIGHT NOW makes for endless repetition. She longs for the un-Internetted Fifties, where people actually went places and talked with each other, even had to say “no.”

Katha talks Ryu into joining the “1955 Intentional Community” for a six month trial.

In 2011, he’s an adult male from Long Beach. In 1955, he’ll be a Japanese-American branded by the residue of WWII. He’ll also have to drop his lucrative job as a plastic surgeon and assemble boxes in a factory.

In swift-yet-rickety stages, Katha learns to thrive in ’55. In the play’s most daring (and least predictable) move, Katha goes un-PC and REALLY fits in with lockstep rigidity.

Maple & Vine presents cases for 1955 and 2011, and raises provocative questions about the quality of life. But the play’s more interesting after the curtain falls. To create the conundrum, the author manipulates superficial characters like puppets. Forcing them to fit into a scheme makes them hard to root for.

Jo Anne Glover does a fine turn as Katha the icicle; her coloratura, '50s laugh is priceless. Jordan Miller (Dean) and Make Nardelli (Roger/Omar) do what they can playing male types. On opening night Greg Watanabe seemed at a loss as Ryu, whose motivations never make much sense (can a character in a play be miscast?).

And Amanda Sitton excelled as Ellen.