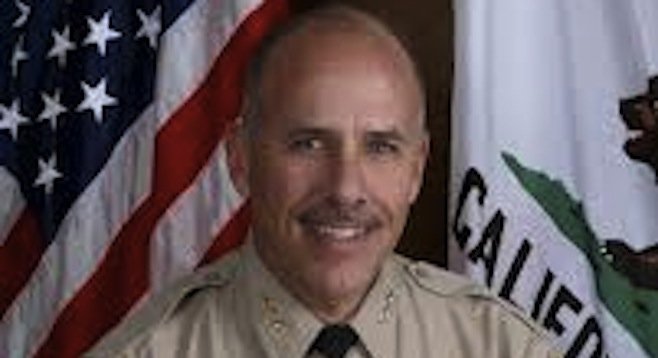 Heading back to Encinitas from Bridgeport on July 10, Boulaalam was pulled over on Highway 395, after a patrol car followed him closely for several miles. According to a deputy’s report, Boulaalam was initially suspected of DUI; however, Boulaalam says he was never questioned about drinking.

As described in the complaint, Boulaalam told Deputy Torres of the legal, locked-away rifle underneath all of his camping gear. Boulaalam said Torres told him the car was going to be searched anyway, only then asking permission.

Stating he was not under arrest, the officers placed Boulaalam, uncuffed, in the back of the patrol car while Torres thoroughly searched the vehicle.

Boulaalam advised Sgt. Hahn that he also had a handgun, registered to his boss, who had left the camping trip earlier. He told the officer exactly where to find the pistol in his zippered backpack.

The complaint states Hahn went to the backpack, dug through the clothes to find the pistol, examined it, and put it in the backpack and back inside the vehicle.

Even though the backpack had been out of the driver’s reach, Boulaalam had left the loaded clip in the pistol — a violation. When Hahn told Torres about the pistol, Torres arrested Boulaalam for a possible felony.

It’s in the evidence photos that attorney Berrey says the two deputies were “dumb enough to get themselves into trouble, and not smart enough get themselves out.”

Photos show the pistol sticking out of the backpack, sitting in the front seat. It was implied that’s where the officer found the gun. If that’s true, Berrey points out, that means Torres left Boulaalam alone in the car after the initial three-minute contact, with a loaded handgun on the seat next to him.

The local DA bought the officers’ side of the story but reduced the charge to a misdemeanor. Boulaalam, who says he has no other criminal record, bailed out of jail the next day. Berrey says the officer’s dashboard video will vindicate his client.

A few other San Diego County residents have reportedly run afoul of Mono County sheriff Ralph Obenberger and his deputies. Over the Labor Day weekend, the sheriff’s department focused on people returning from Nevada’s Burning Man encampment. Several San Diegans were cited or arrested for marijuana or drug possession.

Reacting to the negative statewide press surrounding the Labor Day selective enforcement, the Mono County Board of Supervisors asked the sheriff to answer a few questions at its December 10 meeting.

Sheriff Obenberger, backed up by 15 deputies at the meeting, stated to the board that the body “does not determine the type of law-enforcement services provided to the citizens and/or visitors of Mono County.” After a few more brief statements, he and his deputies reportedly walked out of the meeting.

Some Mono County residents are not happy with how the sheriff is running his department in a tourist-based economy. One of his former deputies, Ingrid Braun, will run against him in the June primary.

Disclosure: As a frequent visitor to the Eastern Sierras, this writer had a letter to the editor published in The Sheet, a local Mammoth weekly newspaper. The one-paragraph letter published on December 20 was critical of Sheriff Obenberger’s display of force at the December 10 meeting. This writer received an anonymous email through the paper’s website advising he should “mind his own business.”

Small corrections to my story from the attorney for Boulaalam. My mistake, I interviewed him for over a hour;

I noticed three inaccuracies I felt I should bring to your attention:

1) Deputy Torres asked Mr. Boulaalam one, perfunctory question about whether he had been drinking; but that was the extent of his DUI investigation.

2) We are not saying the photos show the gun in plain view in the front seat.

We are saying they show the gun in plain view in the rear, driver's side passenger area.

Although it was in the backseat and not in the front, the deputy nevertheless claims on the DVD that the gun posed a threat to him because it was in plain view and "within his reach."

3) Mr. Boulaalam has gotten a traffic citation, but that is the extent of his criminal history.

Attorney Berrey reports that now that a claim has been filed against the Sheriff's Dept., Deputy Torres suddenly remembers more about why he stopped Mr. Boulaalam. Torres has filed a "Supplemental Report" at the request of a Mono County ADA. It includes statements such as Boulaalam's eyes appeared "red and watery." Funny how this was never mentioned in felony arrest report on Boulaalam.

If you are following this story, a Mono County judge approved suppressing of the evidence seized from Boulaalam by the two Mono County deputies, which in my limited legal opinion, means the court will rule it was an illegal search.

If you've been following this story, you may already know that all charges were dismissed against Boulaalam. In June 3's election, challenger Ingrid Braun beat out Sheriff Obenberger by the 2 to 1 margin. I was surprised at her large margin. I up there at the end of April, and saw a lot of support for Sheriff Obie. Even most of my community activist friends up there were for him. My thanks to The Reader for recognizing what happens in other areas of SoCal affects many of us who live here.