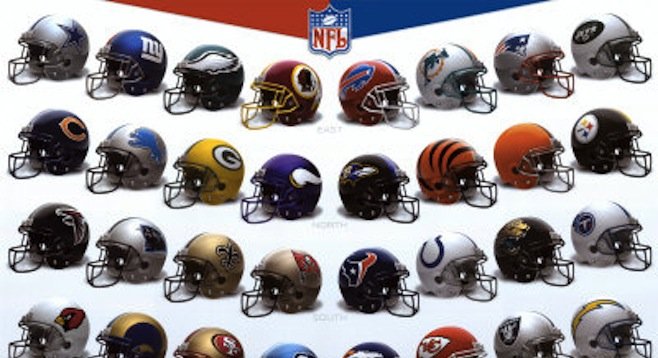 Most observers viewed the August 2013 settlement as a steal for the league. Judge Brody obviously does, too: "I am primarily concerned that not all retired NFL football players who ultimately receive a qualifying diagnosis or their [families]...will be paid," she wrote in a 12-page opinion.

The court will now go back and do more due diligence to determine what amount is truly adequate. More than 4800 former players have filed suit.

I raise my Tecate to the Master.
Next Article

Most observers viewed the August 2013 settlement as a steal for the league. Judge Brody obviously does, too: "I am primarily concerned that not all retired NFL football players who ultimately receive a qualifying diagnosis or their [families]...will be paid," she wrote in a 12-page opinion.

The court will now go back and do more due diligence to determine what amount is truly adequate. More than 4800 former players have filed suit.

The glamour and crime of Tijuana

$ 3/4 billion sounds like a huge payment, but in today's terms, ain't much really. One player might need a million to pay for his injury and long-term care. You didn't mention how much of that the lawyers were set to receive. I'd hazard a guess that it was about a third, and perhaps as much as 40%, leaving even less for the claimants. This is a real story about real people and real injury, and it appears as if the judge realizes that. It isn't often that a judge sends one of these settlements back because it seems too small. Most of the time they just sign off. And sometimes try to have them reduced. It will be most interesting so see how this plays out, and how much the NFL billionaires have to cough up when all is said and done.

Visduh: Generally, the NFL owners -- 18 of the 32 are billionaires -- have the judiciary, legislative, and administrative branches of federal, state, and local governments in their pockets. This judge has broken new ground -- not giving the NFL what it wants. The original sum was far too low and she recognized it. Best, Don Bauder

Actually, the judge ordered both sides present the evidence for the settlement explaining their analysis that the settlement money would be sufficient to cover payouts, medical tests and treatments.. She also specifically said that in the absence of a full-fledged trial, she would not devise her own settlement number. Also, she denied the motion to approve without prejudice.

danfogel: The NFL lawyers proclaimed that in the end, the league would win. Given judicial history, that would not be a bad bet. Best, Don Bauder

That could very well be, though I do have to note that reps from BOTH sides have said they expect the settlement to be approved once the court has all of the information it requested. I probably should have not posted my comment as a reply but as a stand alone comment as I was mainly addressing your incorrect statement that the court is going to determine what amount is "truly adequate". As I said above, the judge has already stated that is not going to happen unless there is a full-fledged trial.

danfogel: The league will try to avoid a trial. Best, Don Bauder

If each aggrieved player receives a $1 million settlement, the total settlement should be $4.8 billion, not including legal fees. The players attorneys are trying to settle the case on the cheap because they want 1/3 of $750 million without going to trial and having to work for the fee. The lawyers don't care about the players, they just want a quick buck. If team owners have to shell out $4.8 billion, there's going a few less billionaires in the lot. Player salaries may have to be slashed and team values may plummet. All in all, this is a positive development.

Burwell: Good observation Nothing new there. Lawyers are known for wanting a quick buck without having to do much work. Fewer billionaire owners and lower values of teams would be positive developments.

Pro football is one of the nation's larger scams -- and it's right out there in the open. Best, Don Bauder

Burwell, I doubt that either of your last 3 predictions will come to pass, for many reasons. Here are a couple. Even having to pay out half of the money over the first 3 yrs, I believe the NFL can afford it, even if that amount was around $2billion. And then the rest is spread out over the next 17 yrs. The NFL will soon be signing a new deal with Direct TV for $1billion a year, beginning after the 2014 season.The broadcast networks will pay a total of nearly $28 billion in fees over nine years under the new contracts, which take effect next season. Their deal with ESPN that was signed just 2 months ago ESPN boosted that network's average annual rights fee to $1.9 billion from $1.1 billion. They could essentially pay that first 50% in 3 yrs just from the increases in contracts alone. And that doesn't even factor in ha fact that the NFL is going to give the other networks the opportunity to take over 6-8 of the games the the NFL now broadcasts on it's own network, to the tine of $750million to $1billion. Like I said, the money is no problem to the NFL, even if it's $4+billion

I understand your issue with taxpayers footing the bill for new sports stadiums and I agree with you on that. But the bulk of the NFL's money, to the tune of $5+ billion per year, is coming from the networks. That's why they are thriving. I don't see the connection there to taxpayer money, though

danfogel: The taxpayers pay for almost 80% of the stadiums in which the games are played. That's key to the vast TV revenue. (NFL owners will say taxpayers pay about 65%, but that's not true. Researcher Judith Grant Long has shown convincingly that the actual taxpayer expense on average is 78%.) Best, Don Bauder