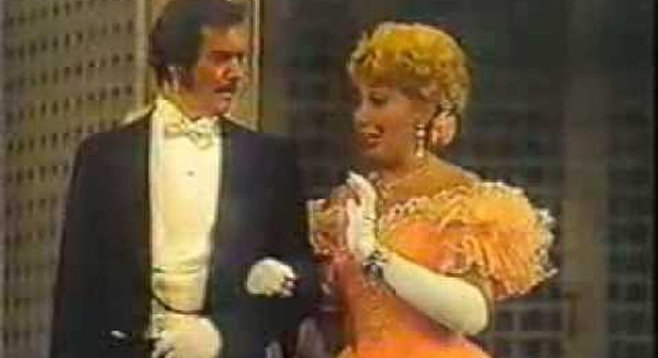 As the opera season is zooming up on us I thought it might be fun to take a look at an older San Diego Opera Production that showed up on YouTube a few months ago.

Side note: back in the day, the curtain at the Civic Theater was gold. It was The 70s, so...

However, there appears to have been some big time shows lurking behind that golden cascade, or should I say shower?

This document of Beverly Sills singing The Merry Widow at San Diego Opera is a delight. At the time, Sills was about three years from retirement but still sounds wonderful in the lead role. She also looks great in the role.

The remainder of the principal cast is strong. I thought Nolan Van Way was great as the younger, love-struck Camille. His tone was full and rich instead of light and wilting.

His romantic counterpart was soprano Glenys Fowles. Ms. Fowles was an Australian singer and did most of her work there but she also appeared with Covent Garden and NYCO. She sounds pretty good here as Mimi in Sydney.

Alan Titus sang the role of Count Danilo and went on to have a career far beyond operetta and comic opera. Here he is singing, of all things, Wotan in Madrid. It’s a long way from Danilo to Wotan but there he is, still singing in 2003.