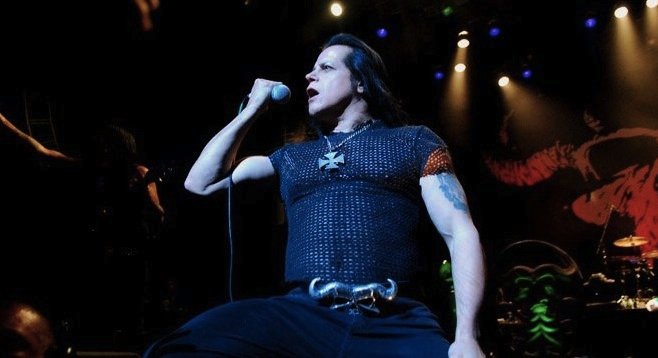 Glenn Danzig, former Misfits frontman and lead singer for the heavy metal band Danzig, is ready to bang heads with his former distributor in court.

On February 27, the self-proclaimed "Evil Elvis" filed a lawsuit in Los Angeles Federal Court against the End Records, a Brooklyn-based distribution company, for failing to pay royalties from his book Danzig: Hidden Lyrics of the Left Hand as well as his band's albums, Blackacidevil and Deth Red Saboath.

According to the complaint, the two parties entered into a contract in March of 2010 wherein the End Records agreed to distribute, sell, and promote Danzig's catalog, under the name of Evilive, for a period of five years in Canada and the U.S.

The contract, says the lawsuit, required the distributor to pay Evilive proceeds. Instead, the complaint alleges the distributor began dumping the records for a fraction of the price, costing the band well over $250,000 in revenue, "diminution of the value of Danzig's recordings," and for missing out on other opportunities.

Sales from the band's output has declined from its heyday in the late ’80s, early ’90s, when songs such as "Mother," "Twist of Cain," and "Devil's Plaything" were popular.

The crooner has tried to resurrect his career in recent years, adding former members of Ministry and Type-O-Negative to his band's lineup, as was the case for his album Deth Red Saboath.

The problem with the distributor may have dampened Danzig's efforts.

Reads the lawsuit: "As a result of the false perception that [the End Records] product dumping caused, [Danzig and Evilive] have been unable to secure distribution of Danzig's recordings and other products in Europe as well as North America, and, therefore, plaintiffs have not received lucrative advances against future exploitations and profits that Danzig's artistic output would otherwise have generated….”