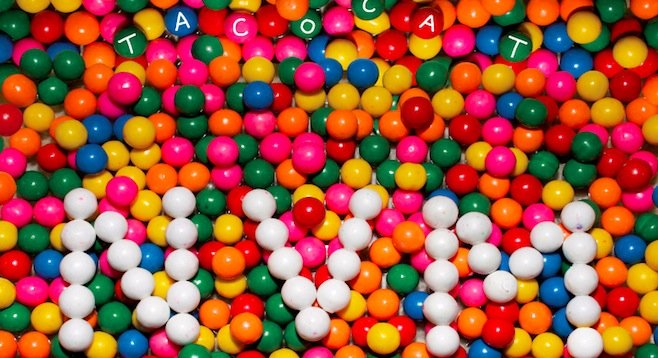 Never heard Tacocat before. First impressions of “Bridge to Hawaii”: (1) I’m getting impatient with the song’s two resounding opening guitar chords, cringing at the prospect of overdramatized, underwritten music...is there going to be a song here?; (2) I’m engaged by vocals with Debbie Harry’s smooth, wise-beyond-her-teenager nuances. Response to “Crimson Wave”: (1) Oh, crap, it’s one of those ironically cutesy early ‘60s surf-rock imitations (even if the irony’s upped, for anyone, by the menstrual theme); (3) Tacocat is doing the early ‘60s bubblegum jukebox sound as if born to the task, with a decent chord change.

Ongoing impressions of “You Never Came Back” and “Stereogram”: Moderately dirty power chords cradle deceptively simple melodies about romantic abandonment/obsolete mid-‘90s culture. There’s more emotion evident about the latter than the former, which makes me give a bunch more points to Tacocat — these (mostly) girls seem like the type that could frug right off the tracks one night. That hint of wildness partly explains the band’s creative potential. It’s what rigid early ‘60s and telephone-game-generation “punk” structures need, along with production by Conrad Uno, who nurses every tonal and harmonic nuance in NVM.