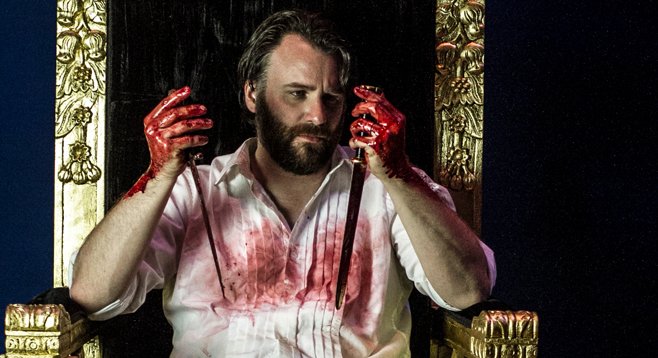 In his excellent book, How to Do Shakespeare, Adrian Noble says “the golden rule is to make the audience listen.”

Noble lists several ways. I would add one more: when you “do” Shakespeare, or theater in general, mean what you say.

This note applies to Intrepid’s opening night performance, because the cast varied a great deal in communicating the sense behind the words.

In battle, where violence has divine sanction, Macbeth is a second William “Braveheart” Wallace. When the enemy doubles their efforts, he goes all in and “doubly redoubles” his.

But when the “battle’s lost and won,” and three witches give him a double message, he gives it a single interpretation. And when his ambitious wife questions his manhood, Macbeth sets in motion a chain of peacetime havoc that doubly redoubles itself. 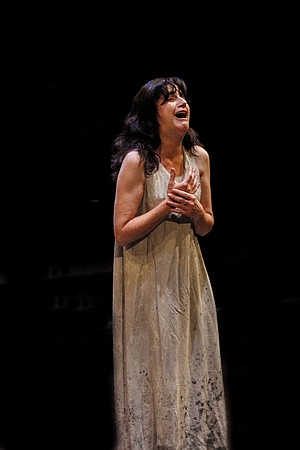 “We have scorched the snake,” Macbeth tells Lady M. in Act three, “not killed it.”

What gives the play its tragic dimension: the more turmoil swirls within Macbeth, the more poetic he becomes; and the more Lady Macbeth tries to repress her conscience, the more it hounds her soul.

At the end of his tragedies, Shakespeare often has an “in case you missed the point” speech. Here young Malcolm calls the Macbeths “this dead butcher and his fiend-like queen.” True, but an idea bangs around the brain long after: they could have been otherwise.

Intrepid Shakespeare’s opening night had a “give it a week” feel. During the first half of Act one, actors hurtled through their lines as if doing a pell-mell “run-through.” Only Francis Gercke’s Banquo and Danny Campbell’s Duncan combined thoughts and verbal discoveries at a natural pace.

Some in the cast settled in, including Sean Cox as Macbeth — he hit the harshest notes well, but still could have been more grounded — and Patrick Duffy’s Macduff as a Hotspur from north of Hadrian’s wall.

Sandy Campbell made an arresting choice as Lady Macbeth. In the end she becomes an Ophelia, as fragile as she is tormented. More of the unconscionable “fiend,” early on, would make the choice even bolder.

One of my favorite scenes in Macbeth is often most productions’ least. In Act four, scene three Malcolm (called a “boy” in the text) confesses that he’d be a horrible king: he’s sex-starved and so greedy he’d steal all the nobles’ land. It turns out, in a transformation that recalls Prince Hal’s from rake to royalty, Malcolm’s a virgin with a teenager’s epic imagination. Brian Rickel is too old for the part and needs a better grasp of the character’s sweeping arc.

On the plus side: Jim Chovik almost steals the show with comic business. He plays the Porter, too drunk to open a door, and does one of the funniest, earthiest renditions of the Porter’s speech I’ve ever seen/heard.

It is a rarity that I comment on theatre reviews. I generally find them useless in terms of getting people to, or keeping people away from going. I felt compelled to comment on this because I too hold a Ph. D. in literature like Mr. Smith and was in the audience opening weekend, though to be fair, I can't be sure that we saw the same performance. A few things stand out as possible misunderstandings and as someone who very much enjoyed the performance, its speed, its clarity and, above all, its casting, I felt compelled to put some thoughts down in the comment section. The first point of contention to be made in regards to Mr. Smith's critique of the play has nothing to do with the play itself, but with his attention to historical timelines. The real Macbeth ruled in the early 11th Century and William Wallace, the Bravehearted Scottish Swordsman, died in the early 14th century, so it stands that Macbeth could not be a "second" William Wallace as his life preceded that of the iconic Wallace. Second in my points of contention is the fact of pace. I get the feeling that Mr. Smith enjoys a slower pace in his Shakespeare, as the two performances he appreciated most came from two gentleman who seemed to take more time with the language than the rest of the cast. I cannot hold them in judgement for this because it simply added a layer of interest in character. They were neither better or worse than everyone else because of the speed at which they spoke. This should not and can not be confused with clarity. This production is incredibly clear and it's fast paced dialogue brings forth an urgent and very present answer to the traditionally slow American Shakespeare that keeps many away from the myriad plays in his canon. Finally, I feel that Mr. Smith has a misunderstanding of his "favorite" scene in the play. Mr. Smith writes in act IV that Malcom "confesses that he'd be a horrible King" and that the actor playing the role needs a clearer understanding of his character. This was my main point in writing today. As I understand the play, this is a time in which Malcom is testing Macduff's loyalty. He is not confessing anything. Confessing and testing are two entirely different actions that could very much affect the arc of character. I thought it unfair of Mr. Smith to take umbrage with the performance when he seems to not understand the arc of the scene. In fact, the scene is commonly known in literary circles as "The Testing Scene". The two men playing Malcom and Macduff (who was thrilling in the role) performed one of my favourite versions I've yet to see.

A visitor, I was thrilled to sit in the presence of such a fine group of people performing a beautifully written play with such clarity and panache. I look forward to seeing more of their work upon my return. It is some of the best Shakespeare work I've seen in the States in a very long time. Kudos to the artistic leaders of Intrepid Shakespeare on a stunning production.