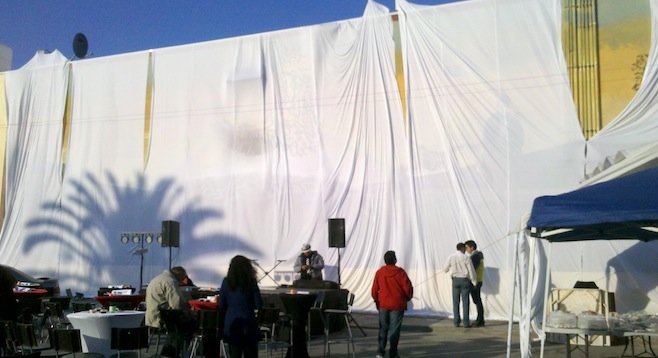 Movimiento Artístico Red Mental has done this work before

It was a cold and windy Saturday evening when I made my way to the Otay area of Tijuana for the unveiling of a 70.5´ x 23´ mural in the back of a strip mall named Plaza Comercial Vilmao.

The invitation booked guests at 4 p.m., but they did not start arriving until an hour later. Organizers closed the street, security guards were posted on both sides of the painted wall, and a dozen tall tables were set up in front of it. White, transparent sheets covered the mural with gaps in between. The wind did not help keep the mural obscured. 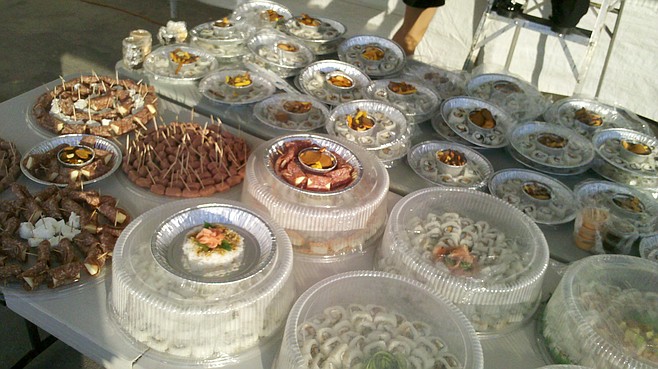 A tent had other works by the artists Lucia Rivera and Simi “Búho” Villamil from their “Movimiento Artístico Red Mental” co-op. Under the same tent, four hostesses wore tiny black dresses representing the different brands that sponsored the mural. The young ladies shivered from the cold. They offered coffee, cheese, cold cuts, sushi, and virgin piña coladas.

The event was improvised throughout the evening. The person in charge of introducing the artists to the stage was unprepared and seemed to struggle with reading. An incorrectly introduced keyboard player who wore a zebra-print fedora took the stage to entertain the guests before the unveiling. 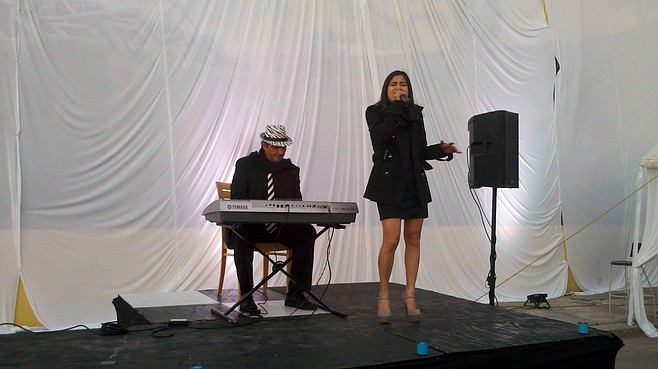 Lucia Rivera, the painter who is also a singer, joined the keyboardist to sing some tunes. A philosopher by the name of Gerardo Navarro Nemónico then took the stage to state how he feels about modern-day art. Finally, at around 6:30 p.m. when it was too dark to appreciate the mural, the sheets were scrolled up to reveal the work. 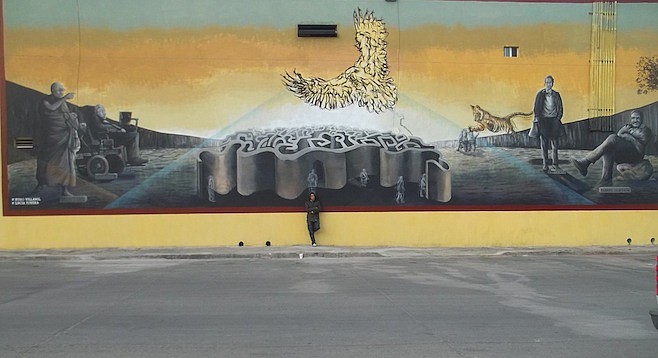 Dalai Lama and Stephen Hawking appear to the left; the middle depicts a labyrinth representing the human brain with what appears to be an eagle hovering over it; and on the right side, Noam Chomsky and Gabriel García Márquez.

“The administrator for Plaza Vilmao was the one that contacted us,” said Rivera. “She [the administrator] went by when we were painting the Steve Jobs mural, took pictures, and later talked to the owner of the mall. It was paid for by all the [businesses in] the mall…."

“We chose those four characters because they represent art, science, philosophy, and spirituality,” said Rivera. “We originally wanted Jodorowsky instead of Márquez, but the owner rejected the original project; he actually wanted all the characters to be Mexican, but we refused. The mural is named Libertad Colectiva por Medio del Conocimiento ”("Collective freedom through knowledge").

Since they painted the Steve Jobs mural, their movement grew popular quick. They have been interviewed by local media and appeared on TV discussing their plans. They painted Nelson Mandela shortly after his death a couple of blocks away from their original Jobs mural in Playas de Tijuana.

I told Lucia that this seemed like they were selling out. She replied, “We didn't have the intention to paint murals in malls, but the opportunity was there and we took advantage of it. We're planning to go to other places in Mexico, probably Guadalara or Mexico City. We plan to take the movement to San Diego and other places in the USA when Búho gets his visa.”