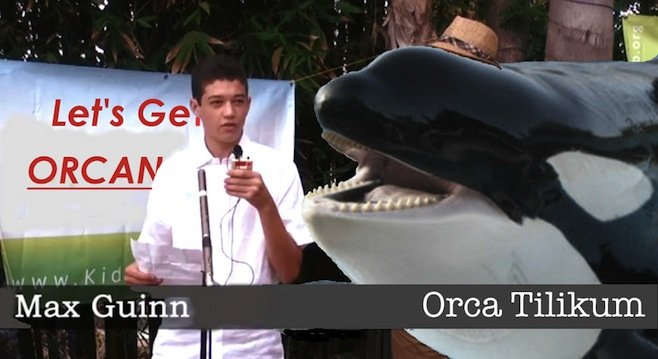 TRYING TO TIME MY CAMERA TO CATCH THAT FIRST SPURT OF BLOOD, SEAWORLD — When young Max Guinn sees a problem, he sets out to do something about it. Guinn, the cofounder of Kids Eco Club, has helped to start environmental clubs in more than 100 schools. So when he saw the documentary Blackfish, which documented the problems surrounding SeaWorld's policy of orca captivity, he set out to do something about it. He invited SeaWorld to debate the makers of Blackfish, with kids asking questions and himself, Max Guinn, as moderator.

Initially, SeaWorld declined to participate on the grounds that Blackfish was "dishonest and manipulative." But as controversy continued to spread — several bands have pulled out of the park's annual Bands, Brew & BBQ event this year — the park changed tactics. "So much abuse and slander has been heaped on Tilikum," said SeaWorld Director of Moral Crises Connie Schentz, referring to the 12,000-pound SeaWorld orca who has been blamed for three human deaths. "And everybody is talking about these whales' 'right to be free.' Well, we decided to grant him another right afforded every American, and let him confront his accusers directly. Plus, he just has a way of getting his point across, you know? I mean, we can talk about killer whales all day, but until you're staring into the open maw of an apex predator like Tilikum, it's all just talk."

"I've had a rough go of it, that much is true," said Tilikum in his opening remarks. "I was abused pretty badly as a child, and as a result, I've always had problems with authority. In my case, that means trainers. I've made mistakes, and I've had more than my share of bad luck. I mean, it's not like I asked that one drunk dude to go swimming with me. Frankly, I think I'm doing pretty well, all things considered. I've got a family, a job, and a place to stay. And now you people are trying to take all that away from me. Tell me why again?"

As of press time, an awkward silence was prevailing at Shamu stadium, site of the debate.