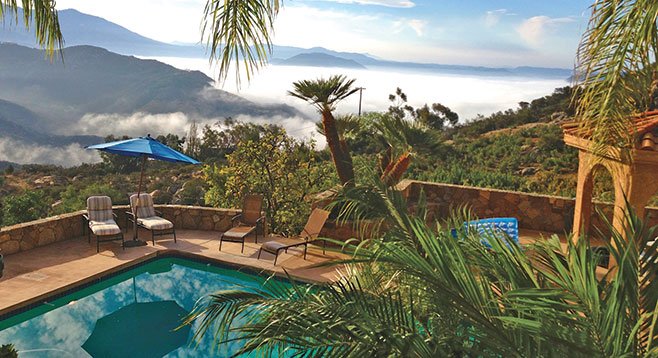 Enough space for your 20 vehicles

The small, mostly agricultural town of Rainbow, population 1832, sits at the northernmost point of San Diego County along the border of Riverside. It’s also the home of Rainbow Hills Estate, a property featuring 8900 square feet of living area spread across over 14 acres.

The current dwellings, which include a 6800-square-foot main residence as well as a detached guest house, were built in 1993 after a stack of turpentine-soaked rags left out by a painter caught fire and led to the original home burning, owner Rita Gregory says. The original owners, taking no further chances, installed fire sprinklers throughout the dwelling and had a fire hydrant installed outside. They also installed a tack house and horse corral, as well as a manmade pond.

The next owners were car enthusiasts, says Gregory, and were responsible for building the guest house and adjacent “ultimate garage,” which is “fully equipped with hydraulic car lift, 3 air compressors, steel work benches, RV bay, walk-in home safe, upstairs office, drop ceiling, florescent [sic] lighting and epoxy floors.” In addition to the 10 cars (plus a motor home) that can be stored there, the guest home has garage space for another 6 cars and the main house four more, for a total garage capacity of over 20 vehicles. 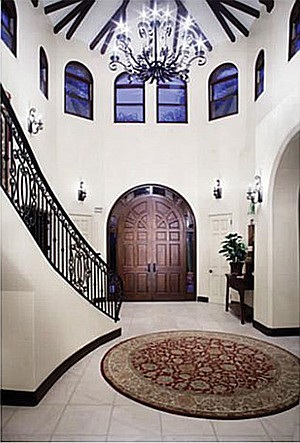 Gregory bought the home in 2001 and began updating and remodeling the interior, a process she says took six years from start to finish. The kitchen got new chef-quality appliances “stone, granite, iron, spanish tile and carved mantle [sic] appointments.” It was entered into the “Ultimate Kitchens” competition in the March 2010 issue of Unique Homes magazine, receiving an honorable mention as a semi-finalist.

One of the garage bays in the main house was converted into a exercise room and spa area, including a Finnish sauna and steam room. The home also features a “gorgeous Spanish vestibule entry [featuring] cathedral ceiling with wooden frames & wrought iron accents.” There are seven fireplaces found throughout the residence, imported Spanish limestone is used extensively for the flooring.

Outside, the property is perched on a hillside, affording dramatic views of the valleys below. Several tiled patio areas, including a pool deck and outdoor kitchen, afford opportunities for al fresco entertaining and dining. The estate even boasts its own beach-volleyball court and helicopter landing pad.

While the area surrounding the residence is professionally landscaped, the property also features producing citrus, avocado, plum, apricot, and loquat trees, as well as income-generating crop flowers, including protea, brasilia, wax, and leucadendron.

Owner Gregory is a noted local businesswoman. In 1970, while operating a pharmacy in the Bonita area she co-founded JT USA, a sports-clothing company that gained national acclaim first providing race uniforms to motocross and BMX riders before branching out to become a leading provider of paintball apparel. More recently, she’s operated Rainbow Hills Growers from her estate and was active as an investor and director of the Hawaii-based start-up Koloa Rum Company, which has been producing spirits since 2009.

Public records indicate that the house last sold for $2.2 million when Gregory bought it in 2001, before the most recent round of upgrades began. It was listed for sale this January with Napa-based agent Kate Hanni, whose husband Tim’s business contacts have worked with Gregory on the Koloa Rum project.

“My husband is North America’s first Master of Wine,” says Hanni. “So for those who are curious about why Rita would have listed with a Napa Valley broker you have to see my list of special marketing and advertising events which include wine and food soirees for high end buyers, celebrities, and their brokers with my husband as chef and Master of Wine.”

The home is currently offered for sale at the asking price of $5,750,000, which includes three parcels of land and the two residences.