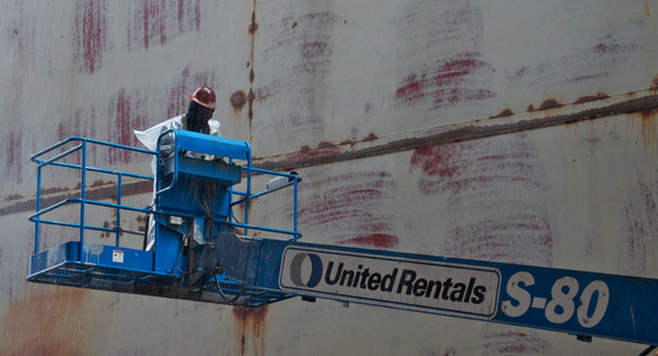 Spent $287,000 more than they collected to fight Barrio Logan plan

The Protect Our Jobs Coalition — the group spearheading the referendum aimed at overturning the Barrio Logan Community Plan — has spent $730,000 on the petition drive, legal fees, and consultants who were working to defeat the plan.

But according to a recent campaign finance disclosure, the coalition is in the red, having spent $287,000 more than it has taken in. The debts include over $65,000 on consultants and legal fees; and of the $185,000 spent on the petition drive, nearly $45,000 is listed as unpaid. Costs are likely to skyrocket as the lawsuits over the signature drives makes their way through court.

The shipping industry says the restrictions entailed in the community plan update will drive up costs and drive away businesses to other ports in the state. Residents, and the majority of city councilmembers, say the buffer zone is needed to ensure the health and well-being of those residents who have for decades lived side-by-side with industrial and commercial businesses.

The Protect Our Jobs Coalition consists of San Diego's largest shipping companies, including NASSCO, BAE Systems, and Continental Maritime of San Diego. Those three companies have contributed over $255,000 since the coalition was formed last year.

The shipping companies aren't the only ones ponying up cash to send the issue to voters: the City of San Diego is expected to pay between $600,000 and $1 million for the special election. That's in addition to the hours deputy city attorneys will need to defend the city in the lawsuit from the locally based Environmental Health Coalition.

Representatives from the Protect Our Jobs Coalition did not respond to questions regarding the outstanding debts and when those debts will be paid.