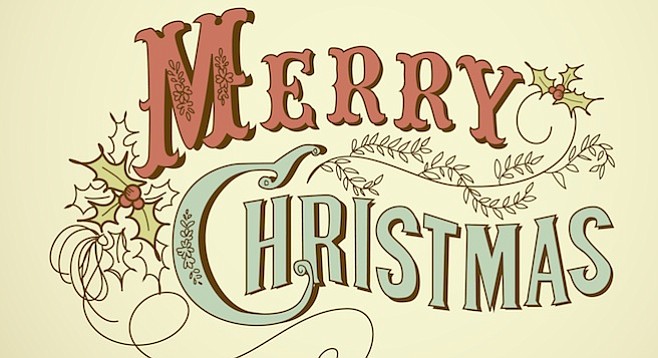 I’m calling you about the article in News Ticker, “Almost a Dirty Secret” by Dave Rice. For once, Dave has his facts completely wrong.

I know because I have been a Walmart employee for the past 15 years and we are very well-compensated. I’ve got full dental, health, and eyecare. I’ve got a full-time employment and I’ve very happy with my employment at Walmart.

This is referring to SD on the QT of this week’s Reader, the “Flat Albert” article.

I think it’s absolutely ludicrous that the author states, “We are, of course, baffled. Everybody loves Fat Albert. Everybody loves Bill Cosby.” Bill Cosby is probably the most unpopular celebrity in the country right now! It’s really ridiculous that he would say anything positive about Bill Cosby right now. I think he needs to apologize to the public for this article, especially to women.

I’m sorry that the balloon was hurt, but this is ridiculous. They should have taken the balloon out of the parade anyway, considering it was Bill Cosby’s creation.

The Grinch has shown himself again. But even the Grinch found the joy of Christmas in the end, so maybe there is some hope for Theo (SD on the QT: “Holiday Blunderland”).

First, let me say that, at this time of year, I don’t believe that anyone has any thought that they will not see some reference to Christmas. After all, it is the Christmas season. You cannot go anywhere without seeing Christmas decorations and hearing Christmas music. So, if Theo is that miserable this time of year, maybe a vacation to someplace like North Korea might be in order.

Next, no one is forcing Theo or his fellow Grinches to go anywhere or spend one miserly penny on Christmas.

Lastly, Theo needs to accept the fact that there are more people who believe that there is a God than not, and quit trying to offend them. Maybe if he would just learn to go with the flow he too, just like the Grinch, could find some happiness in life. Merry Christmas!

For the Health of All

In re: “Apartment Owners Pushed to Butt Out,” News Ticker

As we approach our one-year anniversary of a 100% smoke-free policy, our management team at President John Adams Manor is grateful to have taken the steps necessary to restrict all forms of smoke from our community.

This change has prevented second-hand smoke from entering our residents’ homes, as well as parking lots and playgrounds. In the future, we will save in our apartment turn-over process due to the time-consuming steps of priming walls and applying three or more coats of paint after a smoker has vacated.

Cutting expenses for our owners is great, but our management team’s true satisfaction is seeing healthy, happy residents. It has been rewarding to witness how smokers embraced this new policy, used it to fuel their desire to quit and, by turning this policy change into a positive opportunity, managed to improve their health.

As landlords, we know the challenges involved in converting an apartment community into a nonsmoking one. It is our hope, for the health of all who reside in our communities.

Will of the People

Like the Heisenberg uncertainty principle, there is a strange phenomenon that applies to election results. Election Fraud only occurs when no one is watching.

On the day after each election, November 5 at 4pm, the Election Integrity Committee from Citizens’ Oversight Projects acted as citizen observers at the Registrar of Voters.

The problem with our voting system in California is not the potential for individual voting fraud, but that the computer vote-tally will be manipulated digitally. Our secret ballot, to protect the anonymity of voters, and thus avoid intimidation and corruption of individual voters, leaves a door open to election fraud. Either government officials within the Office of the Registrar of Voters or outside hackers could manipulate the software and digits in the tallying computer, and change thousands of votes without anyone knowing. The only evidence of the votes we have are the paper ballots, which are difficult to count by hand.

This video explains the Snapshot Protocol, a procedure which can be deployed in any CA county and in many states. This seminar was conducted in San Diego on Oct 12, 2014 in preparation for the November 2014 election cycle.

Citizens Oversight Projects (a.k.a. “COPs”) are the brainchild of their director and political organizer, Ray Lutz. He has devised a way to monitor our election system in San Diego by simply requesting a digital snapshot of the Official Election Results and then monitoring the state-mandated manual recount of 1% of the precincts during any given election.

Ray Lutz wants to expand the COPS Election Integrity program to become a national program, but every county has different procedures. In the State of California, by helping election observers in each of our 54 counties develop this kind of election observer system, we citizens can provide the vital checks and balances that keep our secret voting accurate, and a true indicator of the will of the people.