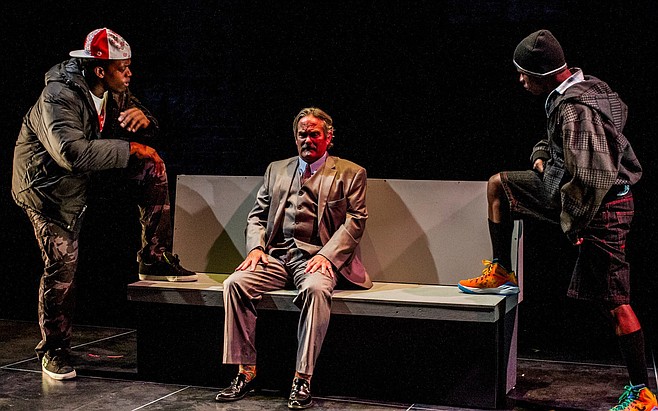 Three strong shows must close by December 7 — don't miss them.

Before it begins to look a LOT like Christmas, there’s still time to catch three shows that must close Sunday.

1.) Les Miserables in Concert at SDSU. Lamb’s Players did a minimalist version of the Schoenberg, Boblil, Natel/Kreszmer musical this year, unforgettably. SDSU has taken the opposite tack: a hyper-epic approach, involving years of coordination between the School of Music and Dance and the School of Theater, TV, and Film. Ed Sullivan used to announce a “really big shew.” Na, Ed. This one’s even bigger: the 50-piece, SDSU symphony orchestra, 123 members of the chamber and concert choirs, and 30 performers, including Ivan Rutherford, who has played Jean Valjean over 2000 times, and who, with musical director/conductor Robert Meffe, anchors this gigantic enterprise with an excellent portrayal of the saintly sinner. Only the resources of SDSU could conceive of such a project. I can’t recall any live performance in local theater with this size and grandeur (especially when the full choir makes its initial entrance for “At the End of the Day” and ker-wham: a tsunami of sound with jaw-dropping richness!). Although the opening night voices were a mite uneven, there was standout work by Courtney Kattengell as Eponine (loved her “On My Own,” and I’m a fixed fan of Lea Salonga’s), Jacob Brent and Julia Cuppy as the weasly Thenardiers, Matt Gibson as Marius, and William Craig Peltzer as stalwart Enjoiras. Much credit to director Paula Kalustian: dressed in black, the cast sits in folding chairs and sings into stand-up mikes, but she’s given them effective business and smart choreography. Credit Peter Nordyke’s sound design and projections, and John Glickman’s crucial sound mix, which must account for 203 musicians! The production also boasts a light show extraordinaire. Designer Chad Shelton must have borrowed every instrument in San Diego. Sad to say, this event is a singularity. It runs through Sunday then will vanish into, in my case and for the sold out house standing at the curtain call, fond memory.

2.) Enron at Moxie. Rivers of corruption have flowed under the bridge since the Enron fiasco of 2001, enough to shove that disaster out of the spotlight. But the scandal of the Texas-based energy company is worth remembering, even studying, for how it manipulated the markets, bribed authorities, and, for a while at least, hoodwinked experts. The company heads got higher than an armada of drugs could lift them: they had power, even dominance, or so it seemed. Laura Prebble’s quirky comedy-drama follows the rise and fall of the energy giant. She combines facts and fantasy: three blind mice, a dance of lightsabers from Star Wars, three velociraptors (representing math whiz Andy Fastow’s devious ways of concealing 30 billion dollars in debt). The show’s a sugar-coated sprawl, but the facts unfold with the marbled logic of a Greek tragedy.

3.) Honky, at the San Diego Rep. Like Enron, Greg Kalleres’ satire uses comedy to raise important questions about race. To illustrate his point that “words are not islands,” that they have consequences that can range far beyond their context, Kalleres’ people fire hate-infected words at each other. A 14-year-old African-American male was murdered for his tennis shoes. Peter, who wrote the ad, feels guilt; so does Thomas, who designed them. They want answers (or absolution, it’s not quite clear). But Davis, the white man who runs the company doesn’t. He’s all business; for him stereotyping’s just “demographics.” For which he pays “premiums.” And he swears he’s not racist. The Rep’s tight production features impressive ensemble work and a satirical, often very funny, edge.