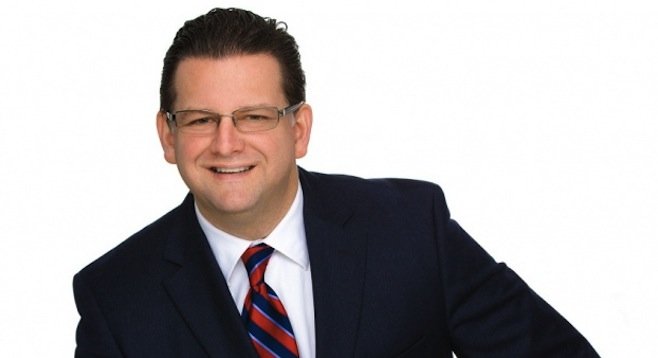 Southwestern College president to be fined

The president of Southwestern College's governing board is set to pay a $3000 fine to California's political watchdog agency for chronically ignoring campaign disclosure laws. 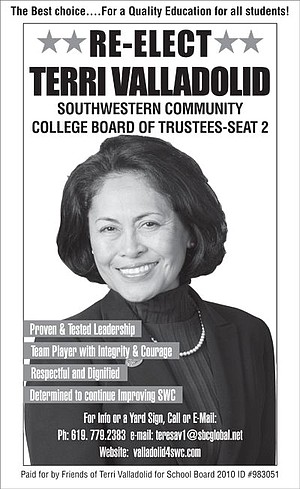 Teresa “Terri” Valladolid, whose day-job is as labor-relations advocate for UCSD's human-resources department, repeatedly disregarded requirements to file her campaign finance statements on time, according to a proposed settlement with the Fair Political Practices Commission.

“After being contacted numerous times by the San Diego County Registrar’s Office and the Enforcement Division in connection with the delinquent statements, Respondent Valladolid finally filed the three statements on July 7, 2014 — a combined 1,020 days late."

It's not the first time Valladolid and her committee have run into trouble for late filings, says the document.

“On August 16, 2012, the Commission approved a $800 fine for Respondents’ failure to timely file two semi-annual statements."

"Given that Respondents were fined two prior times for the same offense present here,” the document says, "it is clear that they were well aware of their filing requirements and simply disregarded them."

The stipulation notes that since the committee did not book any contributions or make expenditures during the periods in question, "the public harm involved here is relatively low."

Still, the document says, considering "prior similar violations, and the penalties imposed in prior cases,” the $3000 fine is justified.

According to her campaign biography, "In addition to her service on the Southwestern College Governing Board, Terri is a proud mother of two daughters Maite and Evita and a very proud Grandmother of nine month old Natalia.

"Terri has lived for the past thirty years in National City and the Bonita area. She takes great pride in her more than fifteen years as ‘SOCCER & GYMNASTIC MOM’ and knows firsthand the importance of being involved with her children."

Valladolid is not the only South Bay elected official settling up with California’s political law enforcer this month. Hector Gastelum, an unsuccessful candidate for Chula Vista City Council, is set to pay a $200 fine for missing the May 22 due date for filing his 2014 pre-election disclosure for the period between March 18 and May 17 of this year.

Also on the board's August 21 agenda is more fallout from the case of Sloat Higgins Jensen & Associates, the City of San Diego's contract lobbyist in Sacramento. In February, the firm's Kevin Sloat agreed to pay a record $133,500 fine for breaking the law by hosting lavish fundraisers and handing out sports tickets to lawmakers.

In addition, the Yocha Dehe Wintun Nation of casino-owning Indians, a Sloat Client, agreed to pay a $9000 penalty after admitting it picked up improperly reported free rounds of golf for state senator Alex Padilla and assemblymen Adam Gray, and hosted a fundraiser for senator Ron Calderon, the cost of which exceeded contribution limits.

Democrat Gray agreed to a $2000 fine for failing to report Yocha Dehe’s largesse.

The current Republican mayor Kevin Faulconer has continued to use the firm's services pending conclusion of an ongoing search for a possible replacement.

Last quarter, Sloat's services set San Diego taxpayers back $42,000, according to lobbyist disclosure documents on file with the state secretary of state's office.

This one is behaving in a manner much like those disgraced board members in the Sweetwater High School district, i.e. the laws of the state don't apply to her. Just another one of the people who need to be replaced ASAP if the endemic corruption in So County school districts is to be rooted out. This fine is more than enough reason to make sure that she gets no more terms as a "trustee."